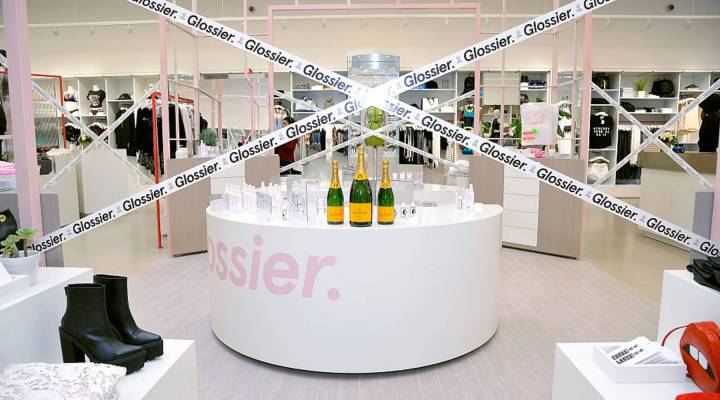 Your shopping experience might now include flutes of champagne, meticulously designed décor, and “robot” hands spraying you with fragrances.

With thousands of workers from the retail sector losing their jobs, there’s been talk of a retail apocalypse. One statistic indicates more than twice the amount of stores are closing across America than are opening up this year. But there are companies that are adapting in an age where online commerce reigns supreme and using innovative retail design to entice shoppers, according to journalist Kassia St Clair who wrote about the the changing retail landscape for The Economist.

Some of the examples she cites include the beauty brand Glossier, which set up its own pop-up store in Manhattan last year, installing a red rubber glove that would spray perfume on vistors’ wrists. And Aesop, an Australian cosmetics company, which designed each of its shops based on the area it’s located in.

St Clair joined us to discuss how companies are actually using brick-and-mortar stores to their advantage. Below is an edited transcript of the interview.

David Brancaccio: What is the story here? People get on lists like it’s a concert or an exclusive club to go into a boutique or a shop?

Kassia St Clair: Since the 1990s we’ve obviously had online shopping, and that’s been brilliant and incredibly convenient for customers. But online shopping is also quite flat and utilitarian in a lot of ways. Then it’s quite hard for customers to distinguish between different brands and to get a real feel for them just online. And so brands that have brick-and-mortar spaces, and even some brands that don’t and hold pop-ups want to kind of engage customers in a very different way within these real-life spaces. It’s a way of getting the customer to feel engaged and emotional about a brand.

Brancaccio: Of course it’s also a social media generation device, right? Because if you’ve lined up, you’ve got into the exclusive place and you find it cool, you’re going to tweet it out, you’re going to put up pictures on Instagram, etc.

St. Clair: The ability to share with the creation of a hashtag through which customers and visitors can share their experiences does kind of give a specific event or a shop a much wider reach that allows the brand to kind of see the reaction that it’s having. But sometimes these spaces specifically seem to be created with social media in mind. So shops might create displays from back in the day when you could only post square pictures on Instagram that specifically fit that square format. So they were perfect for taking an Instagram photo.

David Brancaccio: And it sure isn’t — if you walk into one of these boutiques — trying to create an event to get you in. It’s not like shopping in a warehouse store. You might not even see the product at first.

St Clair: Yes, in some ways it’s really quite surprising because you get stores where almost the point doesn’t seem to be the products on sale at all. So a New York example, there is a store called Supreme that’s opened relatively recently in Brooklyn. And the majority of the floor space of this store is taken up by a skate ring, and the store is very large, and yet very few people are allowed in at any one time. There are bouncers on the doors that are carefully controlling the flow of people into the space itself. The fact that you can’t get in at will, you have to wait and you can’t skate on the rink unless you’re exclusively invited adds the sort of aura to a brand which is just not possible to create on an online space in the same way.

Brancaccio: I like the makeup place — I think it was in San Francisco  — in your piece where a little hand and a rubber glove comes out of a slot in the wall and spritzes you with perfume if you so desire.

St Clair: Yes. These spaces have to be very carefully managed, because if the selling part of these events or of these stores becomes too overt, it can kind of begin to seem — a little bit “desperate” was the word that I heard from one particular brand. And they’re very, very careful — they don’t want to you know make people think that they’re kind of desperate to get people in their stores. They want to create events that really fit with their identity and are very memorable — memorable in the right way. So the customers will leave the event or leave the store, and when they’re next thinking about a particular product, they remember this brand.

Brancaccio: And you could’ve put the headline on the piece: “Bricks and mortar ain’t dead.” I mean this is the new way of getting people back into a 3D space.

St Clair: Yeah, like I said, shops are having this kind of “renaissance” because they suddenly have this real added value beyond the physical square space with which to sort of put shelves and to put product. They’re now just sort of spaces — or they can be spaces — where brands can speak to customers in a new and exciting way.