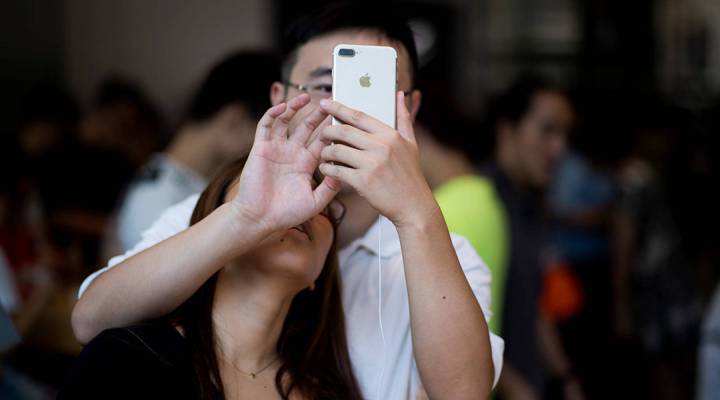 COPY
A Chinese couple tests the new iPhone 7 during the opening sale launch at an Apple store in Shanghai on September 16, 2016.  JOHANNES EISELE/AFP/Getty Images
Kids and Tech: Tradeoffs

A Chinese couple tests the new iPhone 7 during the opening sale launch at an Apple store in Shanghai on September 16, 2016.  JOHANNES EISELE/AFP/Getty Images
Listen Now

From recommendations to notifications to endless scrolling that never stops giving you something new, today’s tech is designed to be irresistible. But some designers of these products are saying these techniques are damaging. James Williams is one of those people. He spent 10 years at Google and went on to co-found a movement called Time Well Spent that aims to get tech companies to rethink how they rethink how they grab and monetize our attention. He’s also the author of the book “Stand Out of Our Light: Freedom and Resistance in the Attention Economy.”

Marketplace Tech continues its series this week on the trade-offs we make for tech and how that trickles down to our kids. Marketplace Tech host Molly Wood talked with Williams about how tech steals our time and how we can get it back. The following is an edited transcript of their conversation.

Williams: When it comes to children, I think it’s a hard situation because — and I have a 6-month-old son, and so I feel this very acutely at the moment — there’s a desire to put restrictions in place, to put boundaries on the types of things that, you know, designers can do, companies can do toward the end of protecting children, and that’s a good aim. At the same time, if you look back historically, the latest technology has pretty much always prompted a moral panic on the part of people who maybe were seeing too much into it or misunderstanding its effects. I think there’s a very delicate tightrope to walk with all this.

Wood: So you worked at Google. You got that company’s highest award for your work on search advertising. I feel like there’s sort of two things that can happen there: 1) you are uniquely qualified to redesign the systems, but 2) how do you make people trust you?

Williams: Well, I mean, I think people who work at these companies I don’t think are themselves the problem. You know, no designer wants to design in a way that makes people’s lives worse. It’s just that people get stuck in systems, where it becomes valuable to do that. I mean, I think search is actually not too bad of an example of where advertising ought to go. I mean, I think one thing we need to do with advertising is make it less about capturing people’s attention and more about supporting their intentions. And to the extent that, you know, a search query is an expression of intention and there’s an alignment between, you know, the interest of the user, the advertiser, the platform, I think it’s a good example of which way to go. We need to have the incentives put in place that make it valuable for these companies to design in ways that actually are aligned with our interests. One thing that we could start with is going to the mission statements of these companies. You know, I’ve never seen a company that actually takes their mission statement and then operationalizes that as a metric. I think the challenge with the attention economy is that the users aren’t the customers. And I think that that’s a huge problem because if it’s a contest between the interests of the users and the interests of the customers and you’re a public corporation, there’s not much energy or force behind pushing back against against that kind of interest.

Wood: Yeah. To reframe, I guess, it’s up to us to stop using this stuff to put financial pressure back on these companies, or it’s up to regulators to stop them from making it.

Williams: I think so. I mean, I think right now there’s not a lot the average user can do. I think one of the few things we can do is sell ad blocking, and I think it was interesting when Apple enabled more ad blocking software via iOS. It did sort of start a conversation. So I think the more ways that we can find to kind of push back against this whole ecosystem, the better. And for some people, that might be just stopping their use of a particular platform or technology. For other people, they might find they can’t do their job if they stop using it. It’s a kind of tragic choice where we’re forced into right now, I think. There’s very little kind of middle ground. So I’d love to see us get to a situation where people don’t have to make that kind of tragic choice.

Wood: And then finally before I let you go, you came to this sooner, you only have a 6-month-old, but there does seem to be a little bit of a crossover between people who now want to change the industry from the outside and who also have children. Like, to think back to our question about kids, do you think that that kind of growing up process, that realizing that there’s a next generation at stake here, plays any part in the kind of contrition that we’re now seeing?

Williams: I think it might. I think it probably varies person to person. I mean, I was concerned about this before I had a child, and now that I have one I’m even more concerned about it. But I don’t think of it as contrition either. I think of it as seeing that vehicle’s on a course that’s going toward a destination that’s not the one we want, and how do we just turn the steering wheel a bit and get it back on the right path? I think that the media likes to create this narrative of contrition, an apology, because I think it’s psychologically resonant for audiences. But I don’t feel contrition because if I hadn’t worked in the tech industry, I wouldn’t have ever started thinking about this when I did. So I think that it’s more about just, like, how can we quickly and clearly start talking about the problem and really moving on it?