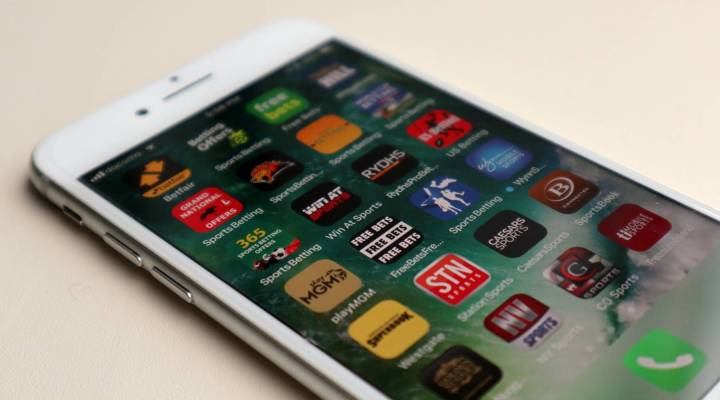 COPY
The gaming research firm Eilers & Krejcik predicts that in states that adopt it, mobile wagering will make up roughly half of the revenue generated by sports betting operators. Adrian Ma/Marketplace

The gaming research firm Eilers & Krejcik predicts that in states that adopt it, mobile wagering will make up roughly half of the revenue generated by sports betting operators. Adrian Ma/Marketplace
Listen Now

For decades the only place you could legally wager on a basketball or football game was in Nevada. And to do it, you had to go to a casino “sports book”— in essence, a room where bettors sit in cushy seats while watching games on panoramic screens, and giant digital billboards tick out numbers to help them calculate how much they stand to win, or lose, on each match-up.

Kelly Stewart, a professional sports bettor, has spent hours of her life in sports books in Las Vegas. “College football season, I have no life,” she said. “I’m working 65 hours a week.”

Call it gambling if you want; but there is a method to it, Stewart said. Each of her picks is based on strategy and hours of research. “You need to be disciplined,” she said. “And as long as you’re on the winning side more than you’re on the losing side, you’re making money.”

Even though she lives in Vegas, Stewart said she doesn’t go to casinos much anymore. That’s because Nevada is the one state where mobile sports betting has been legal and widely available for several years. As a result, Stewart said she works from home most days. When she’s ready to bet, she simply opens one of several sports betting apps on her smartphone.

“It doesn’t make any sense to me to drive all the way around town to bet when [I] could just literally do it at the palm of [my] hand,” she explained.

After the Supreme Court in May struck down a law that barred states from authorizing single-game sports betting, Stewart’s preferred method of placing bets may become available in states other than Nevada.

New Jersey, which opened up sports betting to casinos in June, is expected to make mobile sports betting available as well. In Pennsylvania, mobile betting was legalized as part of a recent bill. And lawmakers in Delaware and West Virginia are also considering legalizing the practice.

“Betting is no different than almost every other consumer activity,” said Chris Grove, managing director at the research firm Eilers & Krejcik Gaming. “Grocery shopping, banking, dating. All of these things happen via mobile devices.”

App developers that already have relationships with casinos are well-positioned for the trend, Grove said. And of course, so are the casinos and online sports books taking the bets. In 2017, legal sports betting operators in the United States brought in an estimated $270 million in revenue, while black market operators saw about $2.5-$3 billion in revenue, according to Eilers & Krejcik.

Now that the ban on sports betting in most states has been struck down, “you’re going to have a far larger market,” Grove said.

If all 50 states legalized sports betting, Grove figures that operators would generate between $7.1 and $15.8 billion in annual revenue, with at least half of that business coming from mobile.

And although various factors — such as  the legislative process, high taxes and licensing fees, and clashes among industry stakeholders—could slow the adoption of sports betting, the momentum among states towards legalization is an opportunity for app developers, gaming companies, and tax collectors.

Still, advocates for problem gamblers, and experts who study gambling disorders, warn that putting sports betting at more people’s fingertips increases the likelihood that some of them will develop a gambling addiction.

Brian Borcziak is a recovering problem gambler who said he has lost over $50,000 betting on sports. “It’s like anything,” he said, “the more available it is, the more people will use and abuse it.”

“Cautious, I think is the word I would use,” said Richard James, a psychology research fellow at the University of Nottingham in the United Kingdom, where mobile sports betting is legal. He says gambling on a phone is different than doing it at a casino because our phones are always with us.

“It can be a powerful tool to get people to gamble more frequently and perhaps more than they might wish to at times,” James said.

“You have all of these alerts come up, dings, buzzes,” said Heather Chapman, a clinical psychologist at the Cleveland VA hospital who specializes in treating problem gambling disorders, “and that impacts your brain and your attention.”

When you’re betting and winning, Chapman said, “it starts a flood of dopaminergic activity, which is that feel good stuff in your brain.” In fact, the physiological response from gambling shares some similarities to cocaine’s effect on the brain, she said.

As the availability of sports betting expands throughout the U.S., aided by the accessibility of smartphones, Chapman said she expects the number of people who develop a gambling disorder will increase with it. Studies show that populations that have easy access to gambling — for instance, by living near a casino — have higher rates of problem gambling than those who don’t, Chapman said. Thus, if sports betting moves from the casino to the smartphone, “that’s a whole different ball game,” she said.

With smartphones, “anybody at any time—say, at work—can be gambling,” said Dr. Heather Chapman, a clinical psychologist who specializes in treating problem gambling disorders at Cleveland’s VA hospital.

The idea that phones can make gambling more habitual has some advocates worried. A survey by the Problem Gambling Network of Ohio estimates that roughly 1-in-4 adults who gamble are at risk for sports betting addiction.

Brian Borcziak, 35, who describes himself as a “recovering” problem gambler, was one such person. At his home in North Ridgeville, Ohio, he dug out a couple of mementos from his gambling days — a silvery coin he received on his first visit to a Gamblers Anonymous meeting in 2016 and a player’s card from a casino he used to frequent.

“They had Entry Level, Bronze, and Gold,” he said. “I got the Diamond Level, which is kind of ironic.” The Diamond level means that “you gamble way too much,” he said. By the time Borcziak sought treatment for his problem, he said he’d lost over $50,000 betting on sports and owed $100,000 to creditors.

Since first walking into a Gamblers Anonymous meeting two and a half years ago, he said he hasn’t gambled at all. In fact, he opted into a voluntary exclusion program, agreeing to be banned for life from all Ohio casinos.

By Ohio law, 2 percent of the state’s casino tax revenues each year are funneled toward programs aimed at treating or preventing gambling addiction. In 2017, the amount was about $5.2 million.

Lawmakers and interest groups in Ohio are discussing legalizing sports betting, and Borcziak said he’s concerned that if mobile betting were available, people who otherwise wouldn’t have the opportunity to gamble, could find themselves in a spiral of addiction.

“It creates the opportunity for more problem gambling,” he said. “Just like me, I started casually.”

If sports betting is tied to a physical location, casino operators can screen out people who are underage or those who have opted to self-exclude. However, Longmeier worries that on a purely mobile betting platform, those rules may be easier to get around, for instance, by creating alternate accounts.

Before Ohio rushes to adopt mobile sports betting, Longmeier said, “I’d want to see what other states are doing and how we can learn from them.”