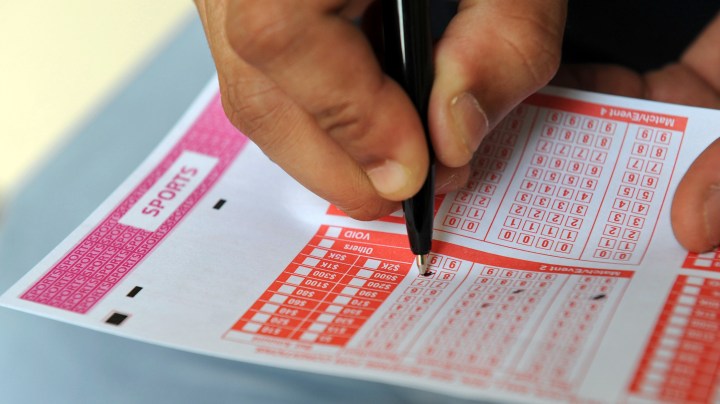 The new NFL season kicks off this week. For a lot of Americans, that means fantasy football and maybe some wagers.

Bookmakers are spending a lot of money on television ads in the hopes of getting a piece of the estimated $100 billion Americans wager on the NFL every season.

“Americans have always bet on sports. They’ve just now been able to do it in a regulated market,” said John Holden, a business professor at Oklahoma State University who studies sports gambling.

That market is only going to keep growing, he said, and most of that growth is going to come from people betting on their phones.

“All of the money — relatively speaking — is in mobile or online betting,” Holden said. “Everywhere that has mobile betting, you see a rate [of use] that’s close to 90% or higher” of all wagers.

But not every state allows mobile betting. In Maryland and North Carolina for instance, bettors can place wagers in person, but not on an app. North Carolina legislators are sharply divided over a proposal to allow online sports betting in the state.

Attorney Lily Faulconer wrote about the legal issues involved, and she thinks the positives probably outweigh the negatives.

“If you’re just going to let all of that tax revenue go, that’s a serious concern because you’re essentially just endorsing the use of an illegal marketplace,” Faulconer said.

Bettors can find any number of unregulated, offshore bookmakers that allow them to place bets on their phones, but those sites don’t generate any tax revenue for states.

“You’re just saying, ‘Well, do it under the rug’ instead of in a way that’s going to benefit everybody here,” she said.

Except not everybody benefits.

“If I could have gambled on my phone … you know, I filed bankruptcy. I don’t know what kind of trouble, but I would have been in much worse trouble,” said Brian Hatch. He’s in recovery from a gambling addiction and made his last bet in 2014. Back then, online betting wasn’t legal where he lived.

Hatch has no doubt that legal mobile gambling has snared a lot of addicts.

“I know of first responders who, while they’re sitting in their cars, will gamble on their phones,” he said. “I have people that I’ve been with in meetings in recovery who have gambled on the toilet. And it never ends. I mean, there’s always sports in other countries that are happening.”

And the mobile gambling industry allows bettors to lay wagers on just about anything. Hatch checked out a sports betting app during a recent Detroit Tigers game.

“You could bet on every player’s at bat. You could bet whether they’re gonna get a hit or runs they’re going to score each inning,” he said. “So there’s no stopping.”

And that can lead to a gambler’s pathology called “chasing.”

“The idea of chasing, particularly with respect to gambling problems, is going back to gambling venue to try to win back money that was recently lost,” said Marc Potenza, a professor of psychiatry and neuroscience at Yale University’s School of Medicine. “And that is certainly something that is common for people with a gambling problems and often gets them into trouble.”

Even the gaming industry recognizes that about 10% of gamblers get into trouble.

Hatch often talks about it as host of “All In: The Addicted Gambler’s Podcast.”

“Seventeen percent of people with a gambling addiction will attempt suicide,” he said. “Up to 50% will have ideations about suicide. And that doesn’t even include people who lose their families, their friends, their jobs, their homes.”