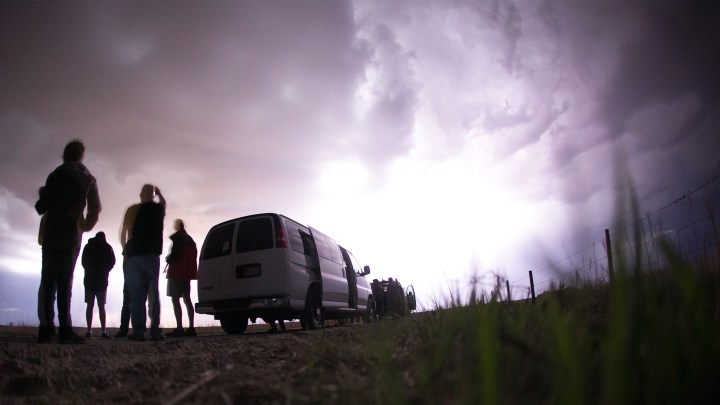 Roger Hill knows a lot about weather. But he rarely knows where he’ll sleep the following night.

“I mean, we may start the day in Oklahoma City and then realize all the models are showing that we have to be in Western Kansas or the Texas panhandle or eastern Colorado,” Hill said. “It varies day to day.”

Every mid-April through mid-July, Hill spends his waking hours as a storm chasing tour operator. He reads weather forecasts, drives across state borders and seeks out extreme weather, wherever that may take him and about 20 customers. It’s a job that’s equal parts tour guide, meteorologist and overnight camp counselor.

The idea is simple; offer paying tourists front row seats to see extreme weather — from severe storms to destructive tornadoes — and bankroll his passion, too.

Until the 1950s, the federal government told forecasters they couldn’t use the word “tornado,” for fear that inaccurate predictions on inaccurate equipment would cause more panic than good. Soon, technology evolved and tracking storms became a high-risk hobby for storm chasers. Today, over a dozen different tour groups offer tourists a chance to experience the storm chasing life, too. Most cost about $3,000 for a week on the road and guarantee a window seat in a van.

I met Hill at a Wyndham Garden hotel near Will Rogers Airport in Oklahoma City, the night before he was scheduled to set off on his third storm chasing tour of the year with his company Silver Lining Tours. I soon learned there’s no guarantee we’d see anything.

In this business, it’s not when we’ll come across some violent act of nature, it’s if we will.

That’s some kind of thrill, sure. But, perhaps, a risky business model?

“That’s kind of the fun in it actually,” Hill said.

Hill’s good at it, too. He’s earned a reputation as one of the top storm chaser tour operators in the industry. Silver Lining Tours’ website boasts Hill’s years of experience — he’s been chasing for 33 years — and state-of-the-art technology the company uses to track storms. Silver Lining Tours claims to have the highest tornado intercept per tour rate of any company and that “nobody finds more storms and tornadoes than we do.”

Hill is like the papa bear of storm chasers. Over six feet tall, with a warm smile and booming voice, he holds the Guinness World record for most tornadoes ever seen – 630 in December 2015 when he earned the title. Today, even more. “I don’t know, I’ve just always been just extremely fascinated by severe weather,” Hill explained. “Always said when I hit 1,000 tornadoes that I’d quit,” Hill said, with a laugh.

The three Silver Lining Tours vans drive from Oklahoma City, OK to northwest Nebraska on day one of a tour.

On day one of the weeklong tour leaving Oklahoma City, Hill and four members of his company gathered with 17 guests outside of the hotel. It was 7 a.m. The idea for the day, Hill explained, was to head from Oklahoma City to northwest Nebraska on the promise of a potential thunderstorm.

“Alright, northbound we go. Gonna be a long day,” Hill said, with a laugh. “Hopefully we get something to look at.”

The group, in three identical white vans, set out on the road.

Like any business, running his company comes with costs. There’s insurance, vehicle maintenance, fuel and paying for hotels each night. Plus, advertising, a website and custom merchandise. Hill estimates this all adds up to about a quarter of a million dollars in overhead costs each year. And there’s an emotional cost, too. Hill spends 110 days on the road straight during storm chasing season, away from family and grandchildren.

Roger Hill spends about 110 days straight on the road during storm chasing season.

But it’s out on the open road where Hill thrives. He has a magnetic presence and as he shared stories from the road, guests were drawn in by his Midwestern charm. We stopped off at a gas station to refuel and use the bathroom. Hill grabbed two Coors Light cans from a cooler.

About 700 miles and almost 13 hours after setting out, the group had nearly reached the Nebraska – South Dakota border. For most of the drive, it had been blue skies above. We stopped, again, for gas. Hill had been studying the weather patterns.

“We have thunderstorms right off to the west and the northwest,” Hill said. “We’re hoping they survive long enough for us to get out there and at least see a few bolts of lightning.”

We had sprinted halfway across America with no guarantee? But then — a flash above and a bolt of lightning forked through the sky.

People piled out of vans, cameras in hand.

The tour stops to watch a severe thunderstorm develop, just south of the Nebraska-South Dakota border.

It was quiet out on the Nebraska prairie. We weren’t close enough to actually hear the storm, just see it. As the group of tourists spread out to take in the view, they were almost wordless. People craned their necks to silently take it all in. All you could hear was the wind blowing.

The purple sky flickered back. It almost seemed to be dancing.

“It looks like tap and jazz and ballet and modern and hip hop all at once,” said Laura Cohen, a guest on the tour who came from New Jersey.

This was Cohen’s third tour with Roger Hill. It’s those moments – coming face to face with nature’s power – that have kept her coming back.

“I’m seeing something that reminds me I have no control over anything,” Cohen said. “Life doesn’t  always work like this, when you actually plan it, time it, and then show up and it’s right here.”

We watched the thunderstorm from a few different places. Soon it was nearly 11 pm – 16 hours since we had started out. The work day still wasn’t over for Roger Hill.

We reached a small hotel in Valentine, Nebraska. He handed out room keys to the weary group for rooms he had booked from the road.

“If y’all need to get ahold of me, I’m in room 121,” Hill said. It was late. But Hill is both in the entertainment and customer service business, so, no matter the hour, he’s on the job.

Now, it’s easy to look at this as a group of tourists who had paid for front row seats to the destruction of rural America. We weren’t at an amusement park. Storms destroy lives and livelihoods. But it’s not exactly that. Hill made it clear to the group that if they came upon a destructive tornado, his priority was to help those in need. He warned tour members that seeing death is a real possibility.

You could also romanticize it as a glorified roadtrip for tourists — but it wasn’t exactly that either. They all had their own reasons for coming.

It was mainly an international bunch. Tour members came from countries including the United States, Australia, New Zealand, Israel and the United Kingdom. Most were weather enthusiasts who had done a tour with Hill before. Each morning, guests pulled out their own weather tracking apps on smartphones and predicted where Hill would lead them.

High school art teacher Tara Kiehn’s father was a weather enthusiast. He would record TV specials about storm chasing that they’d watch together.

“He passed away 10 years ago and my goal was to go chasing,” Kiehn said, as she sat outside of a gas station in Iowa the day after the thunderstorm.

She did this tour in 2015 and now chases on her own. So, why pay thousands of dollars to come back?

“You can learn about storms in a textbook or on Google or YouTube,” Kiehn said. “But if you watch the process that happens, getting to the storm, and what’s involved, it is a very intricate dance that you have to do.”

She was using the tour as a professional development opportunity and plans to teach a meteorology class next school year.

Silver Lining Tours guests and staff wait for weather to develop at a gas station in northeast Iowa.

Sitting shotgun in a van, Hill read weather models on a computer, tried to figure out what the weather would do and how he could stay three moves ahead. It was like a game of chess, but with weather. More of a nerd’s game, than an adrenaline junkie’s.

“We have storms that are forming up just to our east,” he said, as he looked up from his computer. “But they’re not very good storms.”

We stayed the course to see what would happen.

Silver Lining Tours guide Ryan Shepard speaks to another van via their radio equipment. Each van is equipped with technology allowing the tour to track weather changes from the road.

Storm chasing tours have gotten so popular there’re now websites with reviews and ratings for over a dozen different companies. Hill is aware of that competition too. He asked people not to share the tour’s daily plans on social media.

Soon, we turned onto a gravel road. Hill checked the radar.

The storm we were chasing – it fizzled. That’s part of the chase – sometimes it works, sometimes it doesn’t. Hill recounted advice he got from an old boss.

“If you can find a job that is your passion in life and make a living doing it, he said ‘do it’,” Hill explained. “And I did.”

Five more years, he said, then he’ll retire. But for now it’s life on the road.

Correction (July 2, 2018): An earlier version of this article misidentified Tara Kiehn’s father as a storm chaser.