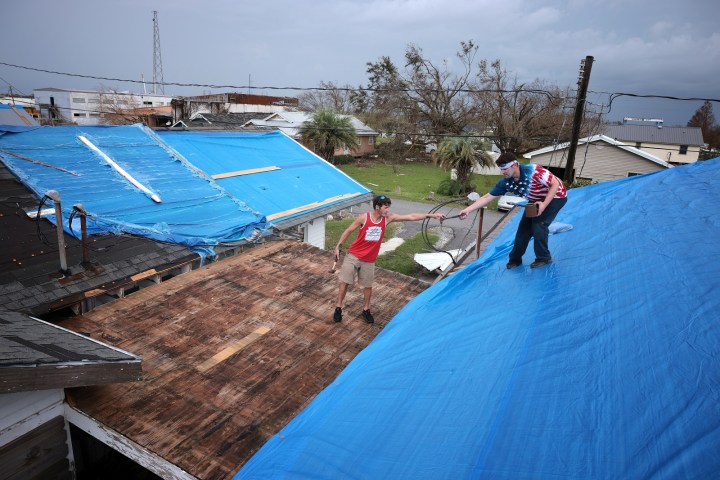 COPY
Louisiana residents install a tarp over a damaged roof in the wake of Hurricane Ida. Roofs are a key component in safety but are vulnerable to extreme weather. Win McNamee/Getty Images

Louisiana residents install a tarp over a damaged roof in the wake of Hurricane Ida. Roofs are a key component in safety but are vulnerable to extreme weather. Win McNamee/Getty Images
Listen Now

It will be a long time before we learn the full extent of the damage from Hurricane Ida and the remnants of the storm that tore through large parts of the mid-Atlantic and Northeast regions Wednesday. At least 22 people were killed in New York, New Jersey and Pennsylvania. Tornadoes touched down in Maryland and the Philadelphia suburbs.

Meanwhile, thousands are still without power in Louisiana, days after the hurricane made landfall. One thing that is clear: Climate change is here. It will take a massive investment to help the United States better withstand and recover from its effects, and much of our housing stock just isn’t up to the task.

Nearly a third of the nation’s homes are at high risk of natural disasters, according to CoreLogic. And low-income communities are especially vulnerable.

“These homes haven’t been updated, haven’t gotten consistent rehabilitation, retrofitting over the years,” said Khalil Shahyd, a senior policy adviser with the Natural Resources Defense Council. He said there is federal funding to help weatherize homes by, say, switching out single-pane windows for sturdier double-pane glass.

But Shahyd said roof repair, one of the most expensive and important fixes, isn’t eligible.

“Once the roof goes, then, you know, you get, you know, the wind damage, you get rain damage, so it just really compounds the severity of a storm like this one.”

Chrishelle Palay is executive director of the HOME Coalition, which advocates for more equitable recovery from disaster. She says wealthier, whiter neighborhoods tend to be better protected in the first place and have the means to bounce back more quickly.

She lives in a historically Black neighborhood in Houston where many people are still recovering from Hurricane Harvey, which hit the region four years ago.

And she said that not enough has changed to prevent the next flood. Her neighborhood has an open-ditch drainage system that often gets blocked with trash.

“We have some people that try to get out there and clean it out themselves. But that really is the responsibility of the city. And sometimes it happens, sometimes it doesn’t,” said Palay.

There are smaller things people can do to fortify their homes, like make sure gutters are clean and there’s a sump pump in the basement.

Caroline Blakely is CEO of Rebuilding Together, which helps low-income homeowners make repairs.

“But once you get a major flood, like we’ve seen over the last few days, it’s pretty tough to prepare for that,” Blakely said.

Preparing for all that climate change will bring is going to take an enormous investment in infrastructure. The Joe Biden administration is using this week’s storm to push Congress, even harder than before, to make that possible.