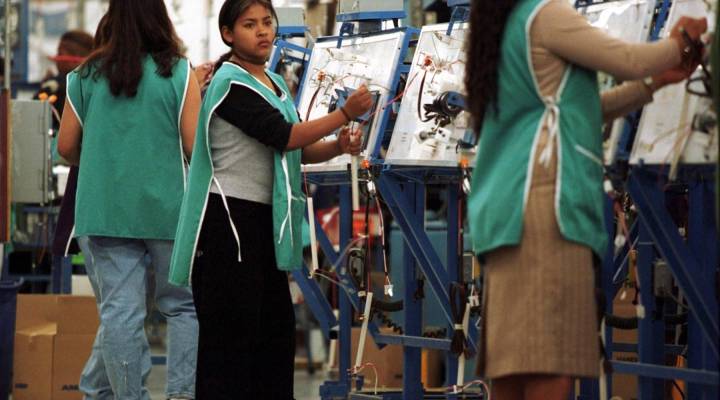 Mexico will hold its general election next month. On the line are hundreds of positions in the country’s Congress as well as the presidency.

While the Trump administration’s tariffs are “not really an electoral deal as such,” economic change is on the minds of people, according to former Mexico Secretary of Foreign Affairs Jorge Castañeda.

Castañeda spoke with David Brancaccio about economic growth in Mexico, perceptions of NAFTA and the role of corruption in the general election. Below is an edited transcript of their conversation.

David Brancaccio: So you look at these economic statistics, the latest for Gross Domestic Product in Mexico showed, certainly no recession, some modest growth, inflation: the lowest in 17 months. But how would you say it feels on the ground to many Mexicans?

Jorge Castañeda: Well, it doesn’t feel very good which is why, according to most polls, something like 80 percent of all Mexicans want to change. Those economic numbers are not being felt by people in their pocketbooks. The growth has been mediocre. And when you recall that Mexico has still around at 1.4 population growth rate per year and the economy is growing at 2 percent per year. Well, there’s not a whole lot left for people to take home.

Brancaccio: How big a deal are these trade tensions between Mexico and the U.S. as voters are forming their final opinions here?

Castañeda: Well, they are not really an electoral deal as such. I don’t think people at rallies and at town hall meetings or all over Mexico really wonder too much about whether the tariffs placed on Mexican aluminum exports to the United States or tariffs placed by Mexico on imports of Washington apples are a big deal. What is true is that these trade tensions weaken the Mexican peso; they affect the exchange rate very severely. And that affects almost everybody in Mexico. The peso has been weakening now constantly for the last month or so, partly because of difficulties with NAFTA 2.0, partly because of the trade war, and partly because of the possible result of the upcoming elections. You put all that together: you’ve got a very significantly weakening peso and that affects everybody.

Brancaccio: Yeah, people feel that and prices and so forth. Now I saw this striking public opinion poll. The Reforma newspaper and the Dallas Morning News had these numbers: 74 percent of Mexicans thought their lives have not improved under the North American Free Trade Agreement. I mean that’s amazing!

Castañeda: Well, it’s maybe a little bit a reflection on how Mexicans feel about Donald Trump because he hasn’t said a whole bunch of nice things about us. What is true is that over the past 25 years, while some sectors of Mexican society and the Mexican economy have benefited enormously from NAFTA, many others haven’t. They haven’t been damaged or injured by it. That’s mainly a lot of nonsense. But they haven’t benefited from it enormously. To give you an example, you know the automobile industry is generally considered to be the biggest success story, the sort of crown jewel. Well, there’s about 750,000 people working in the automobile industry in Mexico including parts, the parts industry, not just the final assembly. 750,000 people is a lot of people, granted. But Mexico is a country of 125 million inhabitants so then it becomes a little more relative. And then if you go to the average salary in the automobile industry, it’s around $400, perhaps $450 a month. Whereas a UAW worker with benefits, etc etc, an hourly worker, can make upwards of $35 an hour in any major, old plant, a unionized plant, let’s say, in Michigan. So you take 35 and you multiply it by 8: you’re talking about $280 right there that you’re getting close to what a Mexican automobile worker makes in a month.

Brancaccio: The tensions between the U.S. and Mexico may not be front and center in this electoral campaign. Prices will be much more front and center. Certainly public corruption must be on a lot of people’s minds?

Castañeda: That is clearly a fundamental issue. Every poll shows that, together with the state of the economy and violence and crime throughout the country, corruption is a central issue. Because firstly, this is generally considered to have been a more corrupt government than previous ones — and we’ve had some real doozies in the past — but also because more attention has been paid to corruption and there has been more sunlight being cast on it. The more risk, the more light in general being cast on it. And so we know more about corruption today than we did, let’s say, 25 or 50 years ago. So if you put all of that together, people’s less amount of tolerance for corruption, a freer media, opposition Congress, you put all of that together, foreign correspondents doing very important job in denouncing it — you put all of together, Mexicans are very upset about corruption and that’s one of the main reasons they want to, as I said, throw these bums out.

Brancaccio: Journalists should be leery about public opinion polls showing who is the front-runner in a presidential campaign. We’ve learned the hard way. But the polls suggest that Andrés López Obrador, who’s to the political left, may have the lead. There’s an accusation that he’s anti-business? Is that your sense?