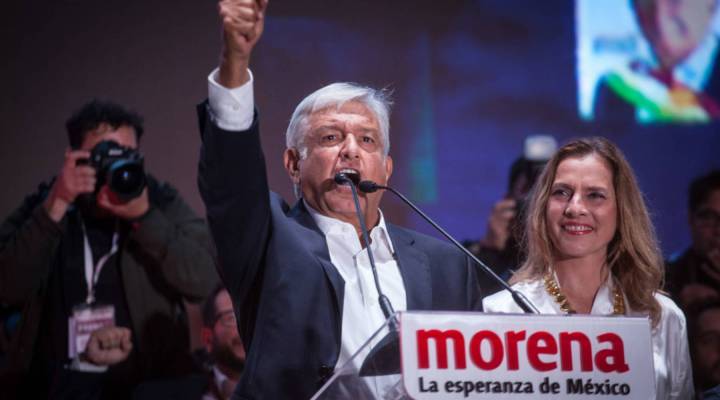 COPY
President-elect Andres Manuel Lopez Obrador speaks during a celebration event at the end of the Mexico 2018 Presidential Election on Sunday in Mexico. Pedro Mera/Getty Images

A populist on the left will become the new president of Mexico, giving hope to citizens there’ll be greater economic quality, but also worrying financial investors.

Andrés Manuel López Obrador has won by a landslide, and his coattails have also swept the Mexican Congress to the left. (AMLO, as he’s known, won’t actually get sworn until late this year — a peculiarity of the Mexican electoral system.)

Mark Jones, a professor of Latin American Studies at Rice University who’s been watching the elect returns all night, joined us to discuss why investors are wary about his victory and what the delay in the start of his presidency could mean for NAFTA renegotiations.

David Brancaccio: All right, this victory was expected. So why are financial market players startled?

Mark Jones: Well, I think what they’re startled by is the magnitude of the victory. Right now, we’re looking at AMLO winning about 53 or 54 percent of the vote with very high turnout. This is a very strong mandate. So not only did he defeat his rivals, he crushed them.

Brancaccio: Central to his position is reducing economic inequality in Mexico, which if you are a poor person in Mexico, has been welcomed by this vote. But investors are a little leery about the costs of reducing the inequality.

Jones: Right. Because Mexico is a very unequal place and it’s a place where the economic elite and investors have had strong support from the government since the return to democracy in the country. The status quo is going to change a little bit for investors in that they’re not going to get treated as favorably as they have in the past. And there’s going to be a greater incentive by the Mexican government to redistribute income a little more than has presently been the case. So from an investor perspective, you’re gonna be nervous about: how far is AMLO going to take it in terms of redistributing income? And if he starts to move too far, that’s going to panic investors.

Brancaccio: And part of the context here is the ongoing renegotiation of the North American Free Trade Agreement. Prior to the election result, President Trump had said there would be no progress on those negotiations until after the U.S. midterm elections, so that essentially had already been on hold at least through November.

Jones: Right, and it actually has to stay on hold because AMLO will not officially be president until December 1. And the current president, Enrique Peña Nieto, has been a lame duck for a while and now he really is a lame duck. So there will be no one in authority in the Mexican government to negotiate anything related to NAFTA. So I think we’re looking at the renegotiations taking place at some point in 2019.