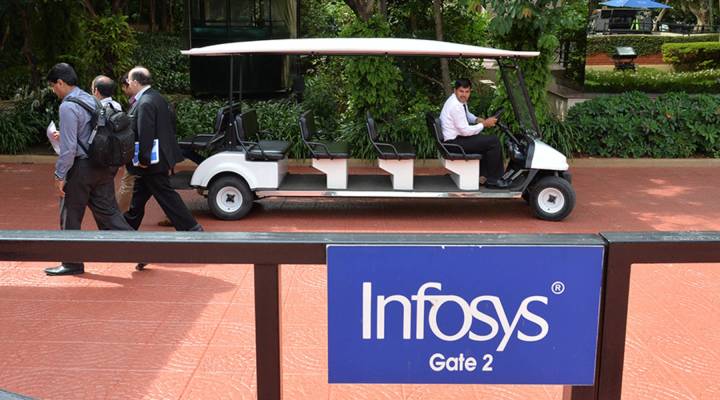 India built a $150 billion tech industry thanks, in part, to American companies outsourcing information technology work and software development. Now, a combination of automation, oversupply and U.S. immigration policies have led to layoffs and concerns about the future for India’s IT giants. One of those is Bangalore-based Infosys, which is credited with essentially creating the city’s middle class. Rollo Romig wrote about Infosys and the Indian IT economy for the The California Sunday Magazine. Marketplace Tech host Molly Wood spoke with him about the headwinds facing IT in India now. The following is an edited transcript of their conversation.

Rollo Romig: The whole business model of IT services is changing a lot. You know, it used to be really easy to answer the question of what they do. They wrote custom software for corporations all over the world. But now what they do could be almost anything. And increasingly, they’re moving into new frontiers, a lot more consulting work. And so no one really knows what comes next. And at the same time the Trump factor has caused a lot of uncertainty and instability in the industry.

Molly Wood: Let’s talk about this U.S. protectionism factor. How much of this is about immigration and the changing policies of the Trump administration?

Romig: Well, that’s a big part of it. Just last year, Infosys announced that it’s going to hire 10,000 U.S. workers in four American states. And it’s for a couple of reasons. Partly, it’s clearly in response to Trump’s moves when it comes to restricting visas, his general hostility to immigration. But it’s also because their clients want different things. Now they’re looking for more of an intimate relationship with Infosys, and so they often want people who are based where the company is.

Wood: And it’s interesting because you note in your article that, although some of these factors are really decimating the IT industry in India, that there are people there who think, “We wish our politicians would be so committed to protecting our jobs.”

Romig: Yeah, that’s right. You know that was one of the things that was most interesting to me about looking at this was seeing what the job scene looks like from the Indian perspective. They’re just as nervous about their IT jobs as Americans are. You know, it seems hard to overstate how much the IT industry had changed India in the past generation. People put it to me in such stark terms, that Infosys created the middle class in India. That Infosys transformed the city of Bangalore from this sleepy, small city to a mega city. It’s a big shift.

Wood: What does that say to you about how intertwined the global tech industry is? Can these ties be undone? Can this web be untangled in a way that allows India to continue to prosper but accomplishes at least the Trump administration’s stated goal of keeping jobs in the U.S.?

Romig: It’s so much more intertwined than we realize, because so much of the work that Infosys and its peers do is invisible to us. But they’re really running the kind of hidden infrastructure of so many major companies. In the long run maybe, it means that these workers end up in other countries. I saw recently that Japan is interested in hiring 200,000 Indian tech workers. So I imagine it will continue to be intertwined, but maybe less intertwined with America than it has been in the past.