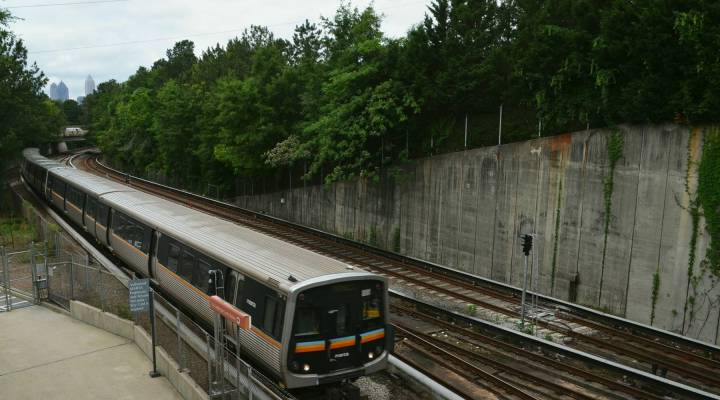 Around the country, urban areas are focusing on expanding public transit, including metro Atlanta, a region known for its sprawl. Traffic there ranks fourth worst in the U.S., according to the transportation analytics company INRIX.

But as Atlanta area leaders look to change attitudes toward buses and trains, they’ve decided they also have to change something else: the name.

“Sometimes a refresh and a rebrand is good,” said state Sen. Brandon Beach, who represents the suburbs north of Atlanta.

Beach is behind a law to create a regional transit system around Atlanta that would stretch from the city all the way to the suburbs. And one of his requirements is that the system sport a new brand: The ATL.

“I think with a refresh it’ll help and get people to be more accepting of regional transit,” Beach said. “And so that’s why I’m doing it.”

The city already has a network of buses and trains, the nineth biggest in the country. It’s called MARTA, which stands for Metropolitan Atlanta Rapid Transit Authority. But that name has baggage.

“It’s rooted in this racist history of suburban opposition to MARTA,” said Alex Karner, a planning professor at the University of Texas at Austin who has studied MARTA.

Karner said when MARTA was founded back in the 1960s, the system was supposed to connect the city to the suburbs. The problem was, people in the suburbs didn’t want it.

“There are stories of bumper stickers saying things like “Share Atlanta Crime, Support MARTA,’” Karner said. “And there are also people on the record at public meetings talking about people getting on buses to commit crime, to steal televisions, etc.”

Karner said it wasn’t just about fear of crime. This was after school integration in the city, when white people left metropolitan Atlanta by the thousands. The city that MARTA would have tied their suburbs to was now mostly black.

“And so the rejection of MARTA at the time was a way to cement the separation of the newly white suburbs from the black city of Atlanta,” Karner explained.

Suburban voters didn’t warm to the idea of joining the city’s transit system in the decades that followed, despite MARTA’s own marketing efforts. So could a new name shift mindsets now?

Selena Barlow owns a firm called Transit Marketing, which has consulted with systems around the country, and she said rebranding can help.

“The things it can do really effectively are increase visibility, make a system catch people’s attention again in a new way,” Barlow said.

But to make a lasting difference, Barlow said it has to come with better transit, like new rail lines or bus stops. She points to Los Angeles as a success story. In the early 2000s, the city renamed its system and gave its buses a makeover.

“The combination of the new look, along with the actual improvements in service really changed the image of what public transportation was in Los Angeles,” Barlow said.

Since the rebranding, voters in Los Angeles have twice agreed to support transit expansion. In Atlanta, there is growing support for the transit system. According to a 2017 survey from the Atlanta Regional Commission, 94 percent of respondents rated improving public transit in Atlanta as “very important” or “somewhat important” for the city’s future. Jennifer Gurley, who lives in a suburb east of Atlanta, said she likes the new name lawmakers came up with.

“Everybody knows Atlanta as the ATL. So it’s just kind of fitting to me that we would call our system The ATL,” Gurley said.

The true test of the rebrand, though, may be in the coming years.

The state of Georgia has offered $100 million to kick start The ATL regional transit system. But suburban voters still get to choose whether they want to put their own money in by raising their county sales taxes.