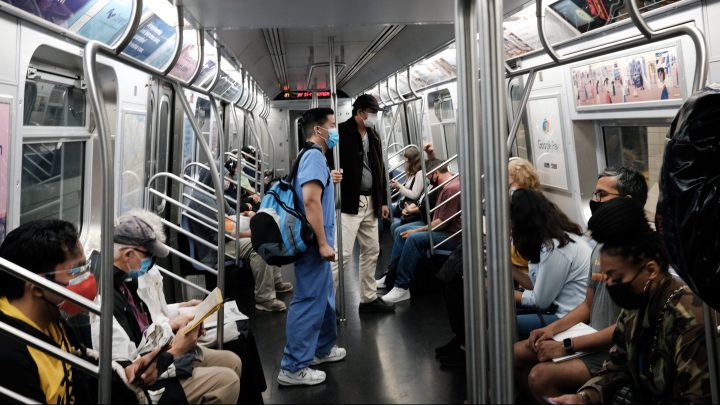 COPY
With gasoline prices reaching record highs, many people are on board with public transportation. Spencer Platt/Getty Images

With gasoline prices reaching record highs, many people are on board with public transportation. Spencer Platt/Getty Images
Listen Now

One sector that could benefit from the rising price of gasoline is public transit. City buses and trains have seen big dips in ridership during the pandemic. Even with some folks back in their offices, the American Public Transit Association said demand is still 62% of what it was before the pandemic, but high gas prices could help turn that around.

The main thing that got Peter Robison out of his car was the hundreds of dollars he spent on parking in downtown Nashville, Tennessee. Now he takes the bus. “So last year was when I really made the full switch over,” Robison said.

With gas prices so high, he’s feeling pretty good about that decision. “I don’t want to say the word ‘smug,’ but I’m very much insulated from the rise in prices,” he said.

Public transit could soon see more riders like Robison, according to Chandra Bhat, who studies travel behavior at the University of Texas at Austin school of engineering.

“When we want to try to move people from driving alone to transit use, car use disincentives tend to work better,” Bhat said. For instance, a disincentive like $4-a-gallon gas.

A few big-city transit systems, including Washington’s Metro and San Francisco’s BART, have seen slight increases in ridership since the beginning of March.

Bobby Sisneros, with Albuquerque, New Mexico’s, Transit Department, said this is an opportunity to entice riders who got used to driving more during the pandemic.

“In the current situation that we’re in with gas prices rising, we get out and we want to remind folks that there’s ways to save money. One of those ways is to jump on our bus,” Sisneros said.

He said the city has a fuel-purchasing contract through June, so for now, at least, it’s not paying through the nose to fuel up its buses.

But not everyone has the option of turning to public transit, said Yonah Freemark of the Urban Institute. “The majority of Americans live in places where transit access is really poor,” Freemark said.

These high fuel prices won’t last forever, he said, but the issues they raise will keep coming up, “so we need to give people reliable public transportation options,” he said.

Freemark said low-income Americans and folks living outside feel it most when transportation costs are high.