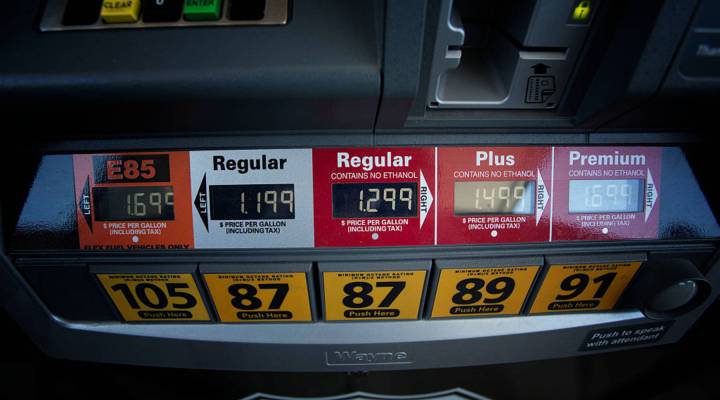 One way to figure out what happens to public transit when gas prices fall? Analyze consumers’ credit and debit card bills.

That’s what Diana Farrell did.  She’s president and CEO of the JPMorgan Chase Institute, a separate research arm of the bank. And she found..

“For every dollar saved from lower gas prices at the pump, households decreased their spending on transit by some 14 cents,” she said.

Farrell is co-author of a study that analyzed the bills of a million Chase customers in 23 states.

Public transit ridership had been climbing steadily.  It did fall a bit last year, along with gas prices. How much of that was due to people driving because gas was cheaper?

“The exact effect on transportation is a little bit unknown,” Robert Puentes said, president and CEO of the Eno Center for Transportation.

He said there does seem to be a tipping point, though.

“When it’s over three dollars per gallon, then we do see riders starting to make those shifts,” he explained. “Probably giving up driving because the threshold is too high.”

Puentes said there are other things pushing people away from public transportation. For example, Metro systems like the one I ride in Washington are struggling with crumbling infrastructure.

“If it gets bad enough they have to cut service, raise fares,” Eric Sundquist said, managing director of the State Smart Transportation Initiative at the University of Wisconsin.

Sundquist said the biggest transit systems – like my Metro – rely the most on passenger fares for revenue, which they need to fix up that creaky infrastructure.