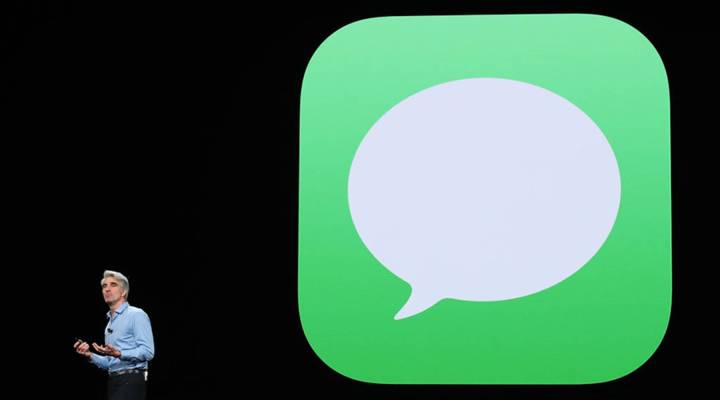 Apple CEO Tim Cook hasn’t been shy in recent weeks about taking shots at Facebook over user privacy. So it was reasonable to think that privacy and social responsibility might be selling points at its Worldwide Developers Conference (WWDC) in San Jose this week. But the issue was barely mentioned by Cook or anyone else for that matter. Ina Fried, chief technology correspondent at Axios, spoke with Marketplace Tech host Molly Wood about whether Apple missed an opportunity. The following is an edited transcript of their conversation.

Ina Fried: It was a soft sell rather than a hard sell. I mean, the feature that they talked about is within the next version of Mac OS, some changes to Safari and the operating system designed to make it a little harder for the companies that like to track all the places you go around the web. And there are some new features on that front, but it wasn’t the loudest we’ve ever heard Apple push on privacy. In fact, we heard more last year when they talked about differential privacy than we did this year.

Molly Wood: Are you surprised to hear that?

Wood: It seems like the other knock on the tech industry right now of course is attention and tech addiction. And so, we saw stuff about screen time tracking, a few more tools for limiting attention. Did you feel like that went as far as you’d hoped? You wrote about this in your newsletter.

Fried: Yeah, it didn’t actually go as far as I’d hoped. I mean, Apple is doing way more than it’s done in the past. But on the tech addiction front, its features are pretty similar to what Google talked about at Google I O last month at its developer conference, and on the parental control side definitely things that as a parent I really welcome, but basically, similar to the kinds of tools that Amazon has long given those that use a Kindle Fire. So I would have loved to see Apple show some really groundbreaking stuff.

Wood: Was there, as a parent, like, a dream feature that you would have liked to see?

Fried: They did one neat thing, which is allowances, so you can give your kids screen time as a reward, which I think will be popular. I would really like to see the ability to hand my device over to my kid and have it still be my device, but have one button that I press and it’s in kids’ mode — they can play all their games, but they can’t change my settings. That is something that actually Microsoft played around with on Windows Phone, they had a Kid’s Corner that did this, but I haven’t seen anyone else do it. And that would be my dream feature.

Wood: Yeah, same. Well, and also just the “turn it off” factor. I mean, it’s great. It seems like there is a bit of that built in, right? That I’ll be able to at least say, “OK, this app is only allowed to run for so long.”

Fried: Yeah, you will be able to do that on a per-app basis, on a content type. So I can say unlimited books but only 30 minutes of games, and I can say no screen time at all after 9 p.m. So those are the kind of controls I think that parents want.

Wood: I do feel like there was some irony in saying, “We’re going to try to help you get some of your attention back, but we’re also going to give you Memoji,” which my kid is going to want to use constantly.

Fried: Totally. I mean, Apple may say they’re not in the business of selling your data. They’re definitely in the business of getting you to use your devices. So I think this is the kind of thing that we have to take the tech industry with a grain of salt and also not expect them to solve all of our problems. Like they make tech products, so we don’t ask the cigarette industry really to curb tobacco use, even though they have programs that are aimed at doing that. I don’t think the tech industry alone is going to solve tech addiction.