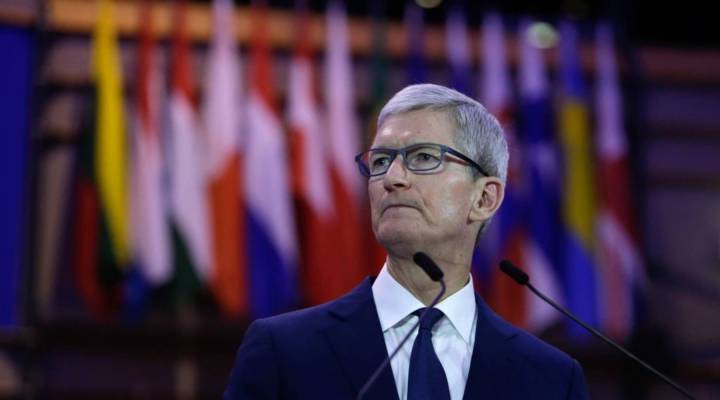 This week in Brussels, Apple CEO Tim Cook lambasted what he calls the “data-industrial complex” created by the tech industry and also called for the United States to adopt comprehensive digital privacy regulations. Apple has stressed privacy as a selling point over the past couple of years, but this was a broadside aimed at two of the other biggest tech firms in the world, Facebook and Google. It’s worth noting that it’s easy for Apple to tout privacy when the option it’s offering is a closed ecosystem where the company controls every aspect of the technology. We dig into this in Quality Assurance, the Friday segment where we take a deeper look at a big tech story.

Molly Wood talked with Tony Romm, a tech policy reporter at The Washington Post. The following is an edited transcript of their conversation.

Tony Romm: I think Tim Cook is pretty frustrated with Silicon Valley. He’s certainly not the only one these days. For the company though, Apple was able to do this because its business model is so much different than a company like Facebook and Google. Those two companies rely on collecting data about you and turning that data into insights that can then be sold to advertisers. That’s how they monetize things. With Apple, it’s different. We’re talking about the sale of iPhone and iPads and MacBook Pros. So Apple’s CEO, Tim Cook, has a bit more of a runway to talk about these things than his peers.

Molly Wood: There were some comments afterword by Facebook’s former chief security officer, Alex Stamos, saying that Tim Cook is being a little hypocritical because the company accommodates Chinese censorship … essentially saying nobody is clean when they’re making billions of dollars off of selling technology.

Romm: Yeah, and even beyond what Alex Stamos was pointing out in his tweets. … Remember, when you’re on your iPhone, when you’re using the search feature, you’re using Google Search there. There’s always been an arrangement between Apple and Google with respect to search. So some of the things that Tim Cook is lamenting when he talks about privacy are things that in some ways the iPhone enables by nudging you towards using Google Search in some settings. But I think that it speaks to the bigger issue here, which is that for many of these companies their troubles with governments are very complex and they’re pretty wide ranging.

Wood: Should any tech company be framing the conversation right now, especially a conversation about regulation on privacy?

Romm: Well, whether they should or they shouldn’t be framing it, they certainly are. And that’s because these companies don’t want to be regulated in a way that affects their ability to collect information and monetize it. And many of them are really worried in particular because of what happened in Europe and in California over the better part of the past few years. Europe put in place very, very tough restrictions on how companies can collect and use information. And then California went ahead and did its own version of that, sort of a GDPR as we call it, for the United States. These companies don’t want to have to follow multiple sets of rules in different parts of the country. So that’s why you’re seeing them talk so much about regulation. Because it’s in their interests to set the rules, to have a voice in the conversation, so that they aren’t burdened by the regulations put forward by governments.

And now for more of the tech news we’re following: