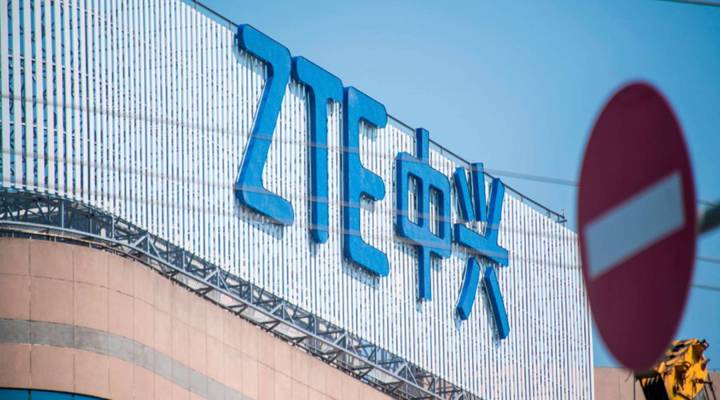 The Chinese electronics giant ZTE finds itself in the middle of U.S.-China tariff and trade war tensions. The controversy is complex, involving trade sanction violations, punishment by the U.S. government and the surprise intervention of President Donald Trump to try to save the firm. But at its core — its technology core — a look inside the internal parts of a ZTE phone reveal a broader critical backdrop of China’s place in the electronics value chain, where it wants to go and what it’s willing to spend to become a world leader.

We asked Kyle Wiens, CEO of the Central California firm iFixit and an expert in cracking open cellphones to reveal their innards, to peek inside a ZTE Max XL Android phone. Retail price: $140.

The key to any dissection is discovering the brain of the species, in this case a computer known as the central processor.

Kyle Wiens of iFixit tears down an Android smartphone from the Chinese company ZTE.

“This is the hub, it’s the central brain of the device,” Wiens said. “And Qualcomm designs most of the processors that are in Android phones.”

This is the key discovery: The chipmaker Qualcomm is based not in Shanghai or Shenzhen, but San Diego. That means the most critical, highest-tech piece of this Chinese phone is American.

“In this case, this is a Qualcomm Snapdragon,” Wiens said. “This is a chip that’s actually designed in the U.S., based on a base design that comes from the U.K. and then fabricated in the U.S.”

The dominance of U.S. semiconductor technology in Chinese phones makes for great angst in Beijing. It reveals Americans firms are generations ahead in semiconductor and other technologies. In factories across the mainland, the critical parts that go into phones, tablets, routers, vehicles, even airplanes, are often imports from places like the United States.

The Chinese government has ambitious plans to end this dependence.

“Techno-nationalism has a long and stellar history in China,” said Damien Ma, fellow and associate director of Paulson Institute think tank in Chicago. “During Mao’s time, they always wanted to have some semblance of technological self-sufficiency. And I don’t think that in itself is surprising or odd. Many countries want it.”

The Chinese government is investing tens of billions of dollars to develop homemade “core” technologies in a number of sectors: information technology, aviation, robotics, biomedicine, next-generation vehicles, data and cyberspace. You might call this China’s “cyberspace race” to win the global future. It aspires to lead in 5G technology, the underlying wireless telecommunication standard of tomorrow.

“It’s like building the highways to support the automobile sector,” Ma said. “So you have to build that brand new infrastructure to support the next information economy.”

But Trump administration officials call Chinese plans “frightening,” a direct threat to the United States and a reason to impose tariffs. Some academics fear mainland domination of high-tech sectors could “hollow out” existing technology sectors in other industrial economies.

“That rhetoric is removed, I think, from a lot of the day-to-day frustration of these industries,” said Samm Sacks, senior fellow in technology policy at the Center for Strategic and International Studies think tank. “[Chinese firms] still lag one to two generations or more behind.”

Sacks said the challenge for China is that its technology development program is top down and that the state picks economic winners rather than the market.

“When you’re talking about the really cutting-edge areas in integrated circuits, for example, there’s a level of know-how, years of years of investment and R&D that’s difficult,” Sacks said.

To be fair, iFixit’s Wien said leading in semiconductors is a “very, very hard” technical challenge for any company in any country.

“This is the pinnacle of human technology,” Wiens said. “This is the result of thousands of years of technological advancements. This is one of the hardest things that we have ever made as a species.”