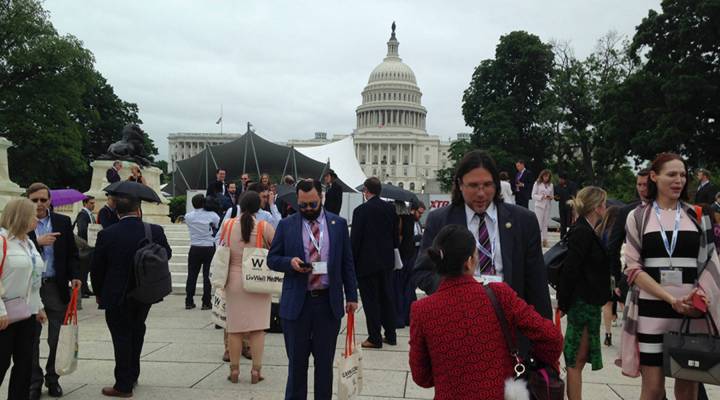 Medical marijuana is legal in 29 states and the District of Columbia. But when it comes to federal law, marijuana is illegal. This legal-illegal thing makes it complicated and expensive to operate a pot business. That’s why a couple hundred business owners and members of the National Cannabis Industry Association hit Capitol Hill this week to press lawmakers to legalize marijuana, or at least ease certain banking and tax laws.

One of those citizen lobbyists is Chanda Macias. She owns the National Holistic Healing Center in Washington, D.C. Her clinic treats more than 2,000 patients, with products ranging from traditional marijuana in strains like Lemon Skunk and Blue Shark to cannabis-laced Rice Crispy treats, tinctures and oils. Macias said Holistic is a multimillion-dollar business that is “mostly a cash business.”

Federal law prohibits the clinic from taking credit or debit cards. On a busy day, Macias says Holistic can take in $150,000 in cash, which is kept in a biometric safe that be opened only with a fingerprint and special ID card. Twice a day, armed guards pick up the money and deposit it at Holistic’s bank. Macias won’t identify the bank.

“I can’t out the banks, because then they’ll shut them down,” she said, laughing at the absurdity of the situation.

It’s most likely a community bank, chartered by a state or Washington, D.C., where medical marijuana is legal. Federally chartered banks don’t want to get anywhere near the marijuana business. Even though Macias pays $2,000 a month in fees, she feels lucky to have a bank, especially since her business is growing.

Macias expects Holistic to bring in revenue of roughly $8 million this year. But she says a big chunk of it will go to taxes and expenses. Macias said Holistic could be much bigger and more profitable if it could operate like a typical business that isn’t illegal in the eyes of the federal government. She can’t deduct many costs related to her business, like rent and parts of her payroll. She employs a lawyer full time to make sure she’s not violating any federal laws, and, she said, her ability to market her company is also limited by federal law.

That’s why Macias put on her charcoal gray suit and black pumps this week and trekked to Capitol Hill along with about 200 other cannabis business owners who want to be heard by lawmakers. The cannabis industry has professional lobbyists, but Macias and her group are citizen lobbyists. And this is Washington.

So the day starts with a group picture in front of the Capitol’s reflecting pool. With the picture out of the way, Macias heads to the office of Rep. Jody Hice from Georgia’s District 10. Hice is a Republican, and his state just expanded its medical marijuana program. After a short wait, Macias and her group are ushered in to make their pitch to one of Hice’s staffers. They tout the medical benefits of cannabis. The also point out how federal laws make it difficult to run a business when you can’t get a bank or take typical tax deductions.

“Our profit margin is so small,” Macias said.

A buzzer starts ringing, the signal that a vote is being called. Macias’s group is ushered out. They join their compatriots in the hall and congratulate themselves for getting through the door. The celebration may be a bit premature, though. The cannabis industry is lobbying for around a dozen bills. Not one is anywhere near a vote. So there’s likely to be another group shot in front of the reflecting pool next year.