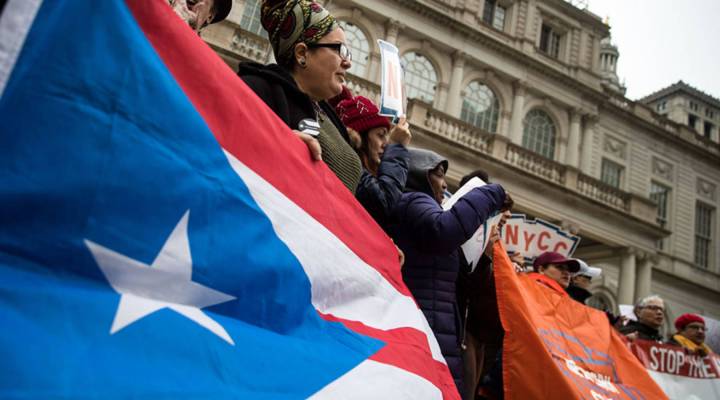 UPDATE (June 11, 2018): Héctor Martínez secured an apartment in Kissimmee for his family less than a week after the original version of this story aired.

Héctor Martínez has been staying in a hotel room at the downtown Kissimmee Ramada since November. His bathroom sink now doubles as his kitchen sink. His desk serves as a medicine cabinet and his television stand has been transformed into a cupboard.

“I have everything here to cook,” he said, pointing to a stack of canned beans next to packets of seasoning. “I got food over there. I make my food in the microwave.”

This kind of improvisation is a skill he has picked up since evacuating the Puerto Rican municipality Toa Baja, which was badly damaged by Hurricane Maria last September. Martínez, his wife and two teenage sons had been renting a house there. They lost furniture and clothes. But Martínez said the toughest part was struggling for two months after the hurricane to get food, water and gas.

“We had all day to find one supermarket that you can buy food,” he remembered. “You make that long line, like two or three hour under suns, to get something to eat.”

When Martínez’s hours got cut at work and his wife lost her job, he decided to come to Florida alone to find a place for them all to stay. In the meantime, his wife and kids are still living in their apartment back in Toa Baja. Martínez said he is worried.

“My heart gets broken when my family sends me texts: ‘We don’t have power today.’ That’s hard for me,” he said, his voice breaking with emotion.

Martínez has been working two on-call jobs doing cleaning and maintenance since moving to Kissimmee. The work earns him about $300 a week. He recently began driving for Uber with a truck he purchased with his savings. The three jobs allow him to cover his daily living expenses and send money to his wife and sons. In order to rent an apartment, Martínez will need at least $3,000 for a security deposit and first month’s rent.

“I do everything for bring my family to here,” he said.

Héctor Martínez is one of more than 7,000 Puerto Ricans currently living in hotels temporarily through FEMA’s transitional shelter assistance program.

Martínez has been able to stay at the Ramada in downtown Kissimmee since November through the Federal Emergency Management Agency’s transitional shelter assistance program, or  TSA. The program, which began Oct. 30, 2017, has placed 7,021 Puerto Rican evacuees in hotels temporarily on the island and on the mainland in states including Illinois, New York and Florida. The program reimburses the Ramada in Kissimmee $129 a day to house each evacuee. So far, FEMA has spent $70.8 million on transitional shelter nationwide. The agency had originally planned to end the program for families on Jan. 14 this year. After requests for extensions from lawmakers, including Puerto Rico’s Gov. Ricardo Rosselló, FEMA has decided to extend the program to June 30.

As of May 10, there were 2,256 families from Puerto Rico in 32 states and Puerto Rico staying in hotels temporarily through TSA. The largest number of Puerto Rican families are living in Florida.

“They’re getting ready. They know that this is going to end,” said Ana Cruz with the city of Orlando’s Hispanic Office for Local Assistance. Cruz and her staff have been helping about 150 Puerto Rican evacuees a month since they began arriving in Central Florida. Right now, she said they are scrambling to find long-term housing, but a shortage of affordable housing is proving to be a huge roadblock.

So Cruz said when evacuees first arrive in Central Florida, she and her staff tell them to see if they can stay with a friend or family for at least three months. The median rent in metropolitan Orlando and its surrounding areas starts at a $1,080 a month, according to data from Harvard University’s Joint Center for Housing Studies. That’s more expensive than rentals in Puerto Rico.

“The ones at the hotels, we try to help them look for a job right away,” she said.

The are many jobs in Central Florida, especially in the hospitality industry. Companies have also been hiring evacuees. Churches, nonprofits and county government will even pay the first month’s rent for families. But some of the obstacles to finding housing include requirements for renters. They need good credit, proof of past rental and a permanent job, or at least four pay stubs.

“And they will have only two,” Cruz said.

Central Florida is also a region where developers are catering to wealthy snowbirds and buyers from Brazil, Canada and China, which makes the affordable housing market challenging, according to U.S. Rep. Darren Soto from Florida’s 9th District.

“So it’s beyond the evacuees. We have residents who are still struggling, too,” he said.

FEMA recently announced it will pay for flights back to Puerto Rico for families in transitional shelter on the mainland. The agency says it will also help them find new apartments on the island if they’re eligible.

But Héctor Martínez doesn’t plan on returning to Puerto Rico.

“I want to get an apartment, you know?” he said.

If he has to leave the hotel before he finds a two-bedroom home so his family can join him, he said he will live in his truck.