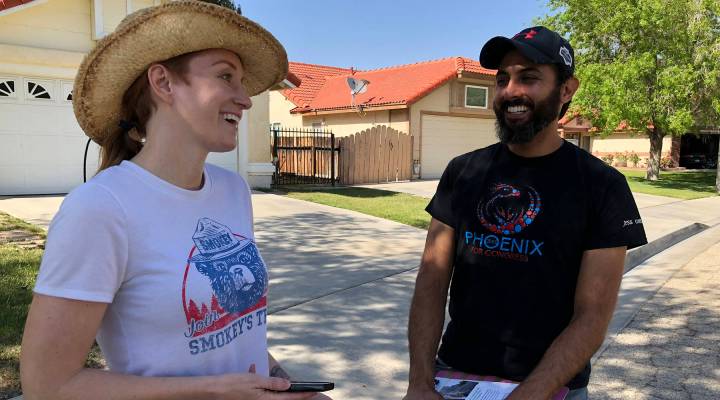 On a recent Friday, Jess Phoenix was scheduled to throw out a ceremonial first pitch at the home game of the minor league Lancaster JetHawks. In the hours before the game, however, she was canvassing streets in the Southern California district she hopes to win in the upcoming midterm election.

Her pitch to potential voters highlighted her uniqueness as a candidate.

“I’m a volcano scientist, actually,” Phoenix told one homeowner. “I study active volcanoes, run a nonprofit that does environmental science research, and I just was pretty upset about what they’re doing to science funding and education funding. So, yeah, I thought, ‘Let’s bring evidence and facts into government.’”

Phoenix, a volcanologist and candidate for the U.S. House of Representatives, threw the ceremonial first pitch at a Lancaster JetHawks game.

If she were elected, she’d be a rarity on the Hill. Among the current Congress, more than 200 people hold law degrees. The hard sciences are much less represented. One representative, Bill Foster (D-Ill.), holds a Ph.D. in physics.

Starting Tuesday, candidates for the midterm elections are being decided in primaries around the country. A lot of the people running this year are political newcomers from the science community. That’s because many fear that the current political powers-that-be are discounting science in their policy making. These people are running to re-prioritize facts in government. But running a lab, and running a campaign are two very different things.

Phoenix is running for the seat currently held by Republican Representative Steve Knight in the 25th District. She feels his voting record has been too in step with President Donald Trump’s agenda.

“We need to have people in office who not only believe that climate change is real, but also understand the steps we need to take to adapt and adjust our society for the changing climate,” Phoenix said.

A few other science-minded candidates are running for Congress in Southern California. They include a doctor, a stem cell researcher and a former technology adviser to President Barack Obama. They’re all part of a wider push by political organizations to get science-friendly candidates to run in races all around the country.

For those trained in scientific rigor, a political campaign can be very unsettled territory.

“To win my first election was harder than to get my Ph.D., so you have to really want to do this,” said New Jersey state Assemblyman Andrew Zwicker.

Zwicker, who has a background in plasma physics, recently won reelection to his seat. He said his first campaign focused on facts, to which he said voters responded.

“They were just so interested to hear about my one and only promise, my platform, which was to use evidence to make decisions,” Zwicker said.

Still, he barely won his first election, edging out his opponent by less than 100 votes. Running is a lot of work. Patrick Madden, who teaches computer science at Binghamton University, briefly threw his hat into the ring for a congressional seat in New York this year.

“You know it’s not going to be fun, but wow, it was, it was way less fun than I ever expected,” Madden said.

Madden hated asking for money, but he was able to raise $25,000 in six weeks. Even so, when a stronger Democratic candidate with a history announced he was running, Madden did the math and dropped out.

“I would like to see more scientists and engineers in Congress, but if I have to get to a million dollars to get past him, that’s not a smart way to spend my time or to set up a fight for him that doesn’t do either of us any good,” Madden said.

Like Madden, Jess Phoenix is running up against serious competition from other Democrats. The primary is about a month away, and two of her opponents have raised a lot more money than she has. As of now, she said this is the only time she’ll run.

That means throwing out the first pitch on Friday night might have been a once-in-a-lifetime experience.

As she took the mound, the wind was blowing straight out to right. She was confident she could get it to the plate, because she’s played competitive fast-pitch softball.

Would she try throwing a curve or zipping something in with heat? She said she was going for something nice and easy, right over the plate.