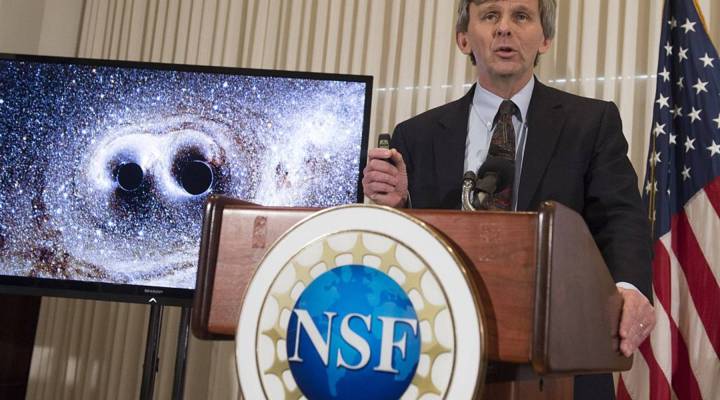 COPY
David Reitze, executive director of the LIGO Laboratory at Caltech, announces that scientists have observed ripples in the fabric of spacetime called gravitational waves for the first time, confirming a prediction of Albert Einstein's theory of relativity.  Saul Loeb/Getty Images/AFP

David Reitze, executive director of the LIGO Laboratory at Caltech, announces that scientists have observed ripples in the fabric of spacetime called gravitational waves for the first time, confirming a prediction of Albert Einstein's theory of relativity.  Saul Loeb/Getty Images/AFP
Listen Now

Deciding to put more than a billion dollars behind a science experiment like the LIGO project (the one that detected gravitational waves for the first time) is not a straightforward task.

There isn’t a single person at the federally funded National Science Foundation who assesses a given mega-project, it’s a large diffuse process.

“When it comes to big asks like LIGO — and big telescopes and ships and accelerators and so on, there we are looking to a bigger community to make those decisions,” said France Cordova, head of the National Science Foundation.

The NSF asks the scientific community to determine what the contours and frontiers are in a given scientific field by commissioning what are known as decadal studies.

“The decadal surveys are very large scale surveys of science,” explained Michael Moloney, the director for space and aeronautics at the National Academies of Sciences, “to look at what the scientific priorities are for the decade ahead.”

The surveys also assess what telescopes or reactors or big projects would be needed to pursue those priorities and roughly how much they might cost. The National Academies of Sciences sets up committees and panels of scientists all over the country, “requesting information, white papers, townhall meetings, it’s usually a two-year process of a lot of back and forth,” said Moloney.

The rankings of projects that come out of this process are what the National Science Foundation — or NASA or DOE — will go by.

The NSF, and methods by which science is government funded generally, have become a target for some Republicans in Congress. Current presidential candidate Sen. Ted Cruz has criticized NASA’s focus on earth science.  Representative Lamar Smith, who serves as chair of the House committee on Science, Space and Technology has criticized projects funded by the NSF in a variety of areas.

On February 10th, the House passed a bill requiring the NSF to certify the usefulness of its grants; one of the possible criteria was economic.

“I think there’s a misunderstanding between some members of congress and the research community that every grant that’s given out should have some economic potential benefit,” said Bill Andresen, associate vice president for federal relations at the University of Pennsylvania. “And that’s just not the way science works.”

Not only is some science valuable in non-economic ways, but when research does have an economic impact you can’t always know it ahead of time.  Studies of eagles ended up leading to advances in contact lenses, said Andrese.  NSF director France Cordova points to NSF funding for digital libraries that helped lead to Google.

Nickolas Fotopoulos spent about seven years as a Ph.D student and post doc working on the LIGO gravitational wave project “in data analysis on inspiraling neutron stars and black holes,” he said.

Fotopoulos argues that he and scientists like him are the economic payoff of funding basic science.  He now works in the private sector for a company called Synaptics, working on touch screen technology in mobile phones and laptops. “Scientists are very good hires,” he said, “because they can deal with poorly defined questions.  You want to build some thing that does something awesome.  You need to break it down and say what steps do we need to get there.”

Half his entire team is from the LIGO project.

Correction: A previous version of this story misspelled Michael Moloney’s name. The text has been corrected.