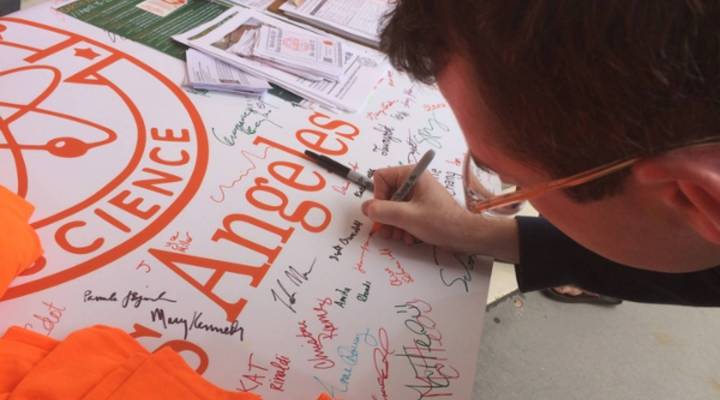 COPY
Caltech graduate student Jeremy Bernstein signs a banner that will be carried in the Los Angeles March for Science. Jed Kim/Marketplace

Caltech graduate student Jeremy Bernstein signs a banner that will be carried in the Los Angeles March for Science. Jed Kim/Marketplace
Listen Now

Thousands of people in dozens of cities across the country will take to the streets on Saturday in the name of science. Science is meant to be nonpartisan, but with federal funds for research in question and the White House cancelling its climate change plans, some scientists feel called to defend their profession.

“Hello, do you wanna sign a banner for the March for Science?”

“Yeah, we’re hoping to make a good, big, bright orange mark at the March for Science,” said Saxton-Fox, a graduate student at the California Institute of Technology studying mechanical engineering.

Their banner was filling up with signatures, which wasn’t a big surprise, considering they were promoting the event on Caltech’s campus. Still, some signatures were a really good “get.”

They’ve staked out a strategic spot at the entrance to a Caltech meeting on immigration.

Tess Saxton-Fox and Magnus Haw sell t-shirts and collect signatures at a table on Caltech’s campus. They’re promoting the Pasadena March for Science.

“Because I’m an immigrant, international immigrant, and I want to contribute for science, so it’s important for me to participate with these guys,” Roshankhah said.

Jason Marshall, another engineering postdoc, is helping lead the Pasadena march. He said the value of scientific facts is under attack.

Still, he did question whether taking to the streets was appropriate for a scientist. He said he only got involved after professional societies like the American Geophysical Union partnered on the national March for Science. An official for the union said partnering made sense, because both wanted to showcase the social benefits of science and highlight the risks research faces.

“Certainly, there is concern that if the federal government cuts back on its funding for scientists and the education of the next generation of scientists, people’s jobs will be at risk,” said Chris McEntee, CEO of the American Geophysical Union.

Science-based institutions differ in how they’re approaching the march. The Field Museum in Chicago is officially participating. The Natural History Museum of Los Angeles County is not, because it wants to avoid any semblance of partisanship.

“We want to make sure that everyone feels welcome here, and they find it accessible and a place that they can learn and enjoy and bring their own questions to bear on what they’re experiencing here,” said Lori Bettison-Varga, president of the museum.

Bettison-Varga said she will march, and she’s encouraged her staff to do so, if they want.

That’s how Caltech is handling it — not officially participating but not stopping its community either.

Sean Carroll is a theoretical physicist at the university. His office looks about like you’d expect: whiteboard covered with equations, multiple books on string theory on the shelf. He said his usual work comprises “quantum mechanics, gravitation, cosmology, where-the-universe-came-from kind of things.”

At the Los Angeles March for Science, though, he’s trying something new. He plans to talk about the nature of scientific inquiry and tie it to democracy.

“They both share this wonderful idea that anybody can be wrong, that any belief is subject to revision when new information or new decisions are made,” Carroll said.

When it comes to learning from mistakes, he said democracy can take a cue from science. It’s a lesson he hopes it’ll learn quickly, as funding for scientific research is already problematic.

“We’re turning away graduate students for the first time ever, because we can’t afford to pay them,” Carroll said. “Our grants are being cut. It’s a very real thing, and we’re one of the richer places to be.”

Funding has been declining for a few years, but he said the current atmosphere and threats of federal cuts have brought things to a breaking point for a lot of people.

Or, if not breaking, a change of paradigm. Across campus, Magnus Haw was doing brisk sales on the March for Science T-shirts.

“I support science, and I support democracy, and this is what that looks like,” Haw said.

She loves her job. COVID-19 is threatening to take it away.