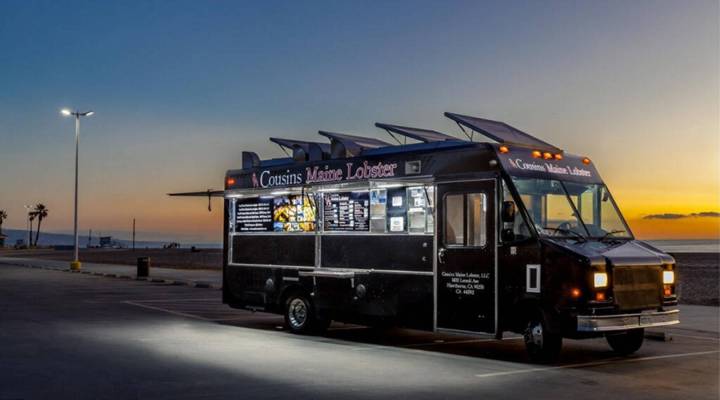 COPY
Cousins Maine Lobster has 20 trucks as part of its franchise. This one is in California. Courtesy of Christian Thomas Hynes
Shelf Life

Cousins Maine Lobster has 20 trucks as part of its franchise. This one is in California. Courtesy of Christian Thomas Hynes
Listen Now

In a lot of restaurants in this country, Maine lobster is the luxury version of a luxury product. You get it in places with white table cloths and shiny silverware. But in Maine, where Jim Tselikis and Sabin Lomac grew up, lobster was eaten off paper plates at family gatherings in Jim’s backyard. Six years and a couple of appearances on “Shark Tank” after the cousins sold their first Maine lobster roll off a food truck in Los Angeles, they’ve got a national lobster franchise with 20 trucks in 13 cities and a couple of brick-and-mortar restaurants as well. They talked with Marketplace host Kai Ryssdal about their new book, “Cousin’s Maine Lobster: How One Food Truck Became a Multi-Million-Dollar Business” The following is an edited transcript of their conversation.

Kai Ryssdal: I need you Sabin, I guess, just because I’m picking on you first —

Sabin Lomac: Oh, geez, I knew that’s how it was going to go.

Ryssdal: — I want you to tell me about summertimes and lobster bakes in Jim’s backyard back in Maine.

Lomac: Yeah. It brings a smile to my face with the question. I don’t think we knew how special those times were at the moment when we were growing up. You know, family kicking back, relaxing, having fun. I think when you separate yourself and you move — I moved to Los Angeles, Jim’s in Boston, you grow up — all of a sudden, you look back and you go, “Wow, those times were so special.”

Ryssdal: So here’s the thing about Maine in this book, and I get that that’s name of the company, and, you know, it’s on the cover of the book. Maine, Jim, is a character in this book.

Jim Tselikis: It is.

Tselikis: Well, because it’s our roots, it’s where we’re from, it’s what we’re all about. It started with those family times in my backyard. But the state of Maine itself is really the foundation of our business. You know, there’s two things going on in Maine: There’s tourism and there’s the lobster industry. And for so long the lobster industry, you know, they were considered, like, the cockroaches of the sea. Lobster was fed to prisoners. But now it’s this delicacy that’s kind of the crux of our of our business and how we started. So the history of Maine and that evolution of the industry itself is a critical part of how we grew.

Ryssdal: How much, Sabin, is it a competitive advantage for you guys that fundamentally your Maine insiders? Because one of the things you learn reading this book is that Mainers don’t take kindly to outsiders, and so you know the lobstermen. I mean, you’ve been there.

Lomac: Yeah, I think it’s a huge part of our story and our competitive advantage. And I think we’re very, very proud of it. So once we opened, we knew that we wanted to really boast about where we’re from, which is why we put it in our name. Cousins Maine Lobster was done on purpose. We wanted everyone to know that our product comes directly from Maine and that we’re from Maine.

Ryssdal: There’s a question to be asked here about the lobster industry, right? Because it is fundamentally stuck in time. I mean, not only are you pulling these prehistoric things out, but Maine lobster is controlled, and it’s outsider-averse, it’s risk-averse, right? I mean, it’s all of those things. And I think that contributes to the mystique of this company in a little ways anyway.

Tselikis: Yeah, for sure. It’s a hard product to get. It’s a wild-caught product. It’s not anything you can just produce by the thousands or hundreds of thousands. There’s only so many licenses for lobstermen in Maine. It’s like almost a 15- to 18-year wait list now to become a lobsterman. So to be able to be tapped in with those guys, to own wharfs or buying stations, to control your supply and really have it traceable back to those boats, it’s a long process, and it’s who you know and how you get in there.

Ryssdal: Can we talk about lobster roll for a minute?

Ryssdal: I’ve never been a fan. I think they’re overrated.

Ryssdal: I just have to say that. I know.

Lomac: Well, lobster rolls are inherently — they were called “lazy man lobster,” because people who didn’t want to pick and sort out of the lobster — you know, there were leftovers from the lobster bake and it wasn’t something five star when we grew up. It’s tradition in each and every bite.

Lomac: Wait a second, this guy doesn’t even like lobster!

Ryssdal: So look. Lobster is not my go to when I’ve got my choice of delicacies. I just happen to think lobster roll specifically is kind of meh.

Ryssdal: You know, I’m bringing my objectivity. Cards on the table.

Tselikis: Hey, we appreciate the honesty.

Ryssdal: How different is this business you guys are running today, which is in the millions of dollars, with franchisees and trucks and actual locations? How different is it from what you thought it would be, Jim?

Tselikis: Yeah, I mean, I think one of the things we say in the book that is certainly very true now, when we had one truck and we were on it and we were there talking to customers or our staff and managing it, we were doing our passion and our love. Once you want to grow and scale, you remove yourselves, and you kind of change your jobs in the sense of managing this whole operation. So our roles change a bit.

Ryssdal: You make your franchisees go out on lobster boats, right?

Lomac: Well, we realized we had opened our first 10 franchisees and they were successful, they had lines and they appreciated the product, but no matter what we can tell you in text, in writing, there’s nothing like actually going on a boat, catching a lobster and throwing nine out of 10 back for the sustainable measures and seeing the city that we grew up in, seeing how small it actually is. So now we make it mandatory for all of our new franchisees before you join the system. And their takeaway is so much more profound.

Ryssdal: How much of this story, Sabin, is about childhoods lost, right? I mean, you guys trying to get back there, and it’s funny now you live in L.A. you’re all over the place, and the defining ethic is summertime in Maine.

Lomac: It’s exactly our story. The fun part about working together, the fun part about owning your own business is you get to create the guidelines, and what we’ve created is something fun. And that’s what the lobster bakes at home were. It’s nothing fancy, but it’s just really a lot of love. It’s really cool.

Tselikis: Definitely nostalgia. Wanting to get back to Maine, the lobster tour in Maine, that resonates with a lot of our customers and ourselves.

Click here to read an excerpt from the cousins’ new book. 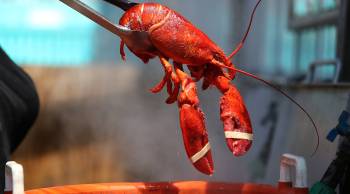 Another victim of the trade war: lobsters from Maine