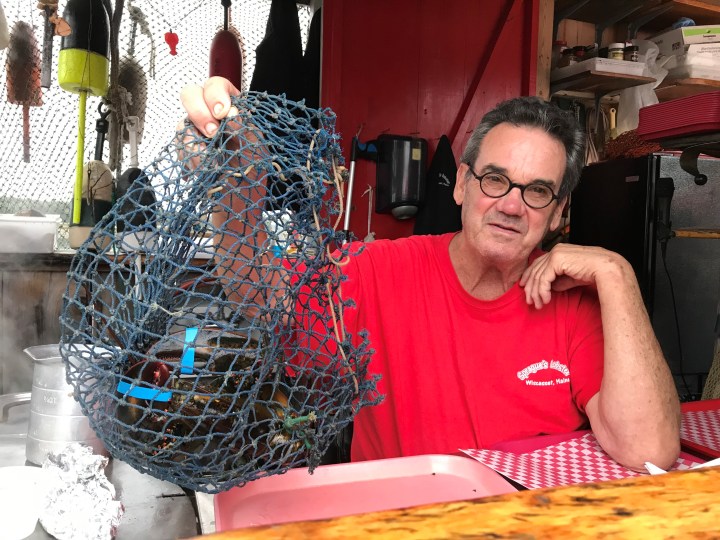 Lobster prices have been higher than ever in New England this summer, thanks in part to the return of dining out and hungry tourists driving up demand. Those seeking the classic summer staple, the lobster roll, have been shelling out around $40 per roll. Sticker shock has not deterred customers at one lobster shack in Maine, where standing in line for two hours is part of the draw.

At Red’s Eats in Wiscasset, on the famous coastal Route 1, a line of 40-plus customers stretching down the block, and sometimes around the corner, is part of the experience people show up prepared for, rain or shine, from its opening day in the spring until the shack closes in October.

“Whether it took us two hours to stay in the line or 30 minutes, doesn’t really matter,” said Ryan Lewis, who lives in Rockport and got in line with his family after driving past Red’s for years. “We just really wanted to check it off the bucket list.”

Pennsylvanians Lukas Truckenbrod and Emily Bell waited in line for an hour and 45 minutes before they could see the menu or the prices. “You can start to smell it,” Truckenbrod said, standing about fifteen feet from the ordering window. Bell chimed in that she was feeling “a little loopy, little giddy with excitement, you know, it’s almost my turn.”

Truckenbrod admitted that he didn’t normally seek out lines and Bell confessed she never waited so long for anything.

Red’s has changed owners a few times in the 81 years it’s been serving lobster rolls from this spot, and for the last thirty years the shack has literally faced its competition: Sprague’s Lobster, across the road on a pier overlooking the Sheepscot River. Customers waiting at Red’s can see Sprague’s and how much shorter the line usually is, which made New Yorker Isabel Sung wonder how Sprague’s stays in business.

“They probably get the leftovers from this place,” Sung said.

Owner Frank Sprague counters that during mealtimes his shack gets up to thirty people in line, and that because he has more kitchen space it moves faster and the wait is never longer than an hour.

“I would say we’re sharing, basically, the same customer base,” Sprague added. He gets some customers who defect from the line at Red’s and show up at his shack looking for an explanation but he can only guess with a shrug: “A lot of people like standing in line.”

Massachusetts native Paul Lang didn’t bother getting in line at Red’s before coming to Sprague’s. “To me, the dynamic over there is that there’s always a wait,” he said. “The perception is there’s like Oz at the end of the wait and it’s just like no, it’s just lobster in a roll.”

Lobster rolls are usually a few dollars cheaper at Sprague’s, depending on market price, but Red’s claims to put more than a whole lobster in every roll and that it serves a total of fourteen and a half tons per season. Sprague figures he sells half that, not counting thousands of lobster dinners, which are not on the menu across the road.

The differences don’t end there —Red’s serves free popcorn shrimp while you wait and has a posted list of celebrities who’ve stood in line, while Sprague’s plays blues and Zydeco from loudspeakers and offers a free lunch to anyone who arrives on waterskis. Locals line up at both shacks.

“We brought 20 people here when my mom died,” said Southport native Bucky Holloway. “We put her ashes on the river and we all came here and chowed down—it was nice.”

Nicole Pelletier grew up in nearby Farmingdale and just tried Red’s for the first time this summer.  “It’s not like any other rolls we usually have around here,” she said. “It’s just, like, completely stuffed beyond the brim, so it’s definitely worth the wait.”

Some customers say Sprague’s feels and smells more like Maine, especially at low tide. Others fly in from as far as Delaware just to go to Red’s.

“It’s a phenomenon, that’s for darn sure,” said Rick Tetrev, who manages the Wiscasset Regional Airport. Each week at least a few planes land with folks who also have to rent a car for the four-mile drive to Red’s and Tetrev says some of them give up on the line and head across the road. “They thought that Sprague’s was really good,” he added.

Both shacks are family businesses and Sprague says they’re on friendly terms. The current owner of Red’s, Debbie Gagnon, was too busy for an interview, but said by email that there’s “enough sunshine for everyone to get a tan.”