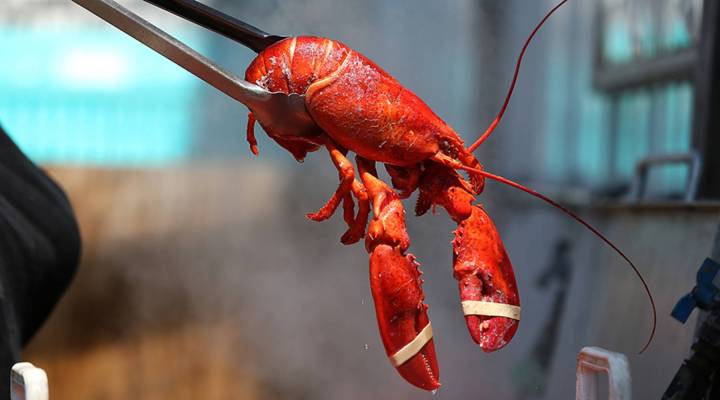 A freshly cooked lobster is removed from a pot in Portland, Maine. Justin Sullivan/Getty Images

A freshly cooked lobster is removed from a pot in Portland, Maine. Justin Sullivan/Getty Images

Cousins Jim Tselikis and Sabin Lomac were thrilled to find a large crowd when they parked their truck on their first day of business in 2012. Then they realized they were customers, and they had kept them waiting.

The following is an excerpt from their book “Cousins Maine Lobster: How One Food Truck Became a Multi-Million Dollar Business,” where they discuss how they went from opening a food truck to receiving a phone call from the folks at “Shark Tank,” the ABC TV show where entrepreneurs try to gain investors.

Cousins Maine Lobster had opened for business only a few months earlier. April 27, 2012, was not what those in the restaurant world would call a “soft opening.” It was more like jumping from a perfectly good airplane, ten thousand feet in the air, without a parachute. The night before, we still didn’t have the truck or the lobster meat. We picked up both the next morning and cruised to our first stop that day—only to learn that we had forgotten the register. Just to make things even more interesting, none of our eight employees had ever stepped foot on a food truck or knew how to make a lobster roll. We weren’t even sure how the grill worked.

When we finally arrived at the location—thirty minutes late—we saw a large crowd. What a lucky break! We were going to set up shop right next to all these people. It was only when we parked and jumped out of the truck that we learned this wasn’t just some random mob. They were our customers. Once we realized this our spirits instantly sank. We had already committed one of the cardinal sins in the food world: we had kept our customers waiting.

In a situation like that there’s only one thing you can do: make it up. While our truck employees read the manual for turning on the grill, the two of us grabbed some fresh lobster meat and mingled with the crowd. We hadn’t planned on giving out free samples that day, but we also knew that many of those waiting had never had genuine Maine lobster. It’d be like giving out free flutes of Dom Pérignon. Californians appreciate quality product and they certainly know their seafood. But Maine lobster is in a class all its own. Even those in line who had tasted it before had probably had it at a fancy restaurant where they paid fifty bucks for a one-and-a-half-pound lobster. Here we were, giving the stuff out for free—and you better believe they ponied up a few bucks for little bit more. We had planned on hitting another stop that day but never made it. When our lobster meat ran out at the first stop, we had to call it a day—an exhausting, frustrating, yet rewarding day.

Looking back, we had done a thousand things wrong. Add them all up and there’s no reason why we should ever have made it to day two. But as naïve as we might have been about the rigors of the food truck business, we have never been wrong about our product. And the thing is, we don’t produce it, we don’t grow it, and we don’t even fish it out of the ocean ourselves.

But we respect it. More than that, we respect what it represents and what it means to others, because we know what it means to us. If you want to know the secret to our success, you can stop reading now. Respect for Maine lobster is our secret. But Maine lobster is so much more than a seafloor crustacean. That delicious animal might be what we sell, but it’s more than what’s on the plate—which is damn good!

We didn’t have all of this figured out that first day as clearly as we do now. Back then, we were just two cousins from Maine who thought that Southern Californians might like a taste of home—a lobster roll. (They do.) Since then, we’ve come to learn and appreciate just what it is we sell. We’ve always known it was special, but now we know why. We think you should know why, too, either because you love our product as much as we do, or because you want to achieve your entrepreneurial dreams yourself. We wrote this book for both types of reader.

Before we get ahead of ourselves, we have a more pressing question to answer: What on earth were all those people doing there waiting for us?

The night before our opening day, the LA branch of the lifestyle site UrbanDaddy.com had come across a picture we posted on Twitter announcing the new Cousins Maine Lobster. The picture showed the two of us as little kids with our grandfather on a rocky Maine beach. It might seem strange that we announced our company to the world with a family picture that didn’t show a truck, a lobster roll, or even a lobster. It just showed us, with our grandfather, having a uniquely Maine moment. But that’s what we wanted to sell: a uniquely Maine moment. Our chosen medium—the channel through which our customers would experience this moment—happened to be the lobster roll. At its heart, however, we wanted people to experience, if only briefly, a bit of our cherished memories growing up as Mainers.

That was the idea, anyway. We had no idea if anyone would get it. But UrbanDaddy reposted the picture, along with our planned location the next day, and something happened. It struck a chord with those who saw it. We were lucky that UrbanDaddy gave us the best free publicity we could’ve asked for, but we wonder now if the response would’ve been the same if we had posted a lobster or some other generic picture. Those who saw it saw something authentic. Or maybe they just wanted lobster rolls . . . .

In any case, it did the trick and we had our first sold-out day. Not long after that, we got a call from Shark Tank.

From Cousins Maine Lobster: How One Food Truck Became a Multi-Million Dollar Business by Jim Tselikis and Sabin Lomac. Copyright © 2018 by the authors and reprinted with permission of St. Martin’s Press, LLC.