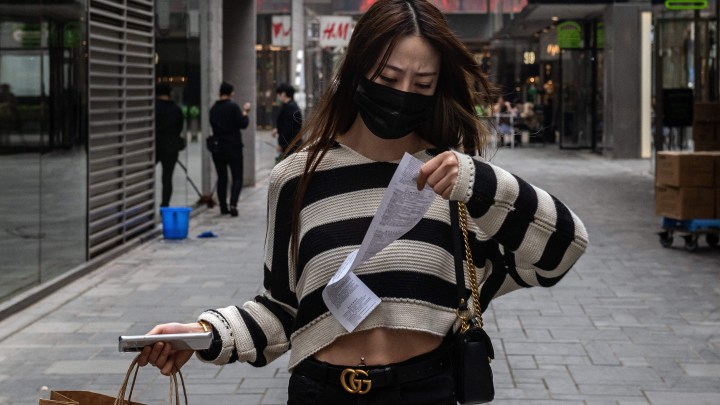 COPY
A shopper checks her receipt in a mall in April 2021. Nicolas Asfouri/AFP via Getty Images

A shopper checks her receipt in a mall in April 2021. Nicolas Asfouri/AFP via Getty Images
Listen Now

It seems like everything James Mallios buys is getting more expensive. He owns a few high-end restaurants in New York, like Amali, a Greek spot in Manhattan and Bar Marseilles, a French restaurant in Queens.

First of all, there’s the food: fish, steak, lamb. It’s all getting pricier, so he can’t even swap out one dish for another to keep prices down.

He also buys things like cleaning supplies, napkins and toilet paper for the restaurants. And now he’s paying the same for lower-quality products. Yet Mallios has only raised menu prices at one of his four restaurants recently.

“It’s not that I don’t think I should,” he said. “Every restaurateur is always skittish about raising prices because they’re afraid of the customer reaction. But economically, like, by the book, we should have raised everything 20% two months ago.”

There’s always that fear — customers get used to paying a certain amount for a steak or an order of lamb chops. And to them, that’s the fair price.

The price of many products, supplies and raw materials have been rising. And there’s a calculation that retailers have to make when their costs go up: Do they pass those costs along to customers? If so, when?

In Washington, D.C., Amina Ahmad owns a soy candle shop, Handmade Habitat, and she has a system for making pricing decisions. She keeps a spreadsheet with the cost of every single material and supply.

“Everything from the wick to the little sticker that goes underneath the wick, that makes it centered on the candle, to the warning label, to the lids,” she said.

That spreadsheet has been telling her to raise prices. Take the cost of soy wax, for example. “It was probably about $60 for a 50-pound box of wax at the beginning of the pandemic and it’s up to $75 to $100 now,” Ahmad said.

Like Mallios, she’s had to think about how long she can take the hit.

“Sometimes you just think maybe you can sit on this for a while,” she said. “But after a certain amount of time, like after a few months of it not going down, we just can’t.”

Ahmad would be losing money. And this is basically a one-woman business; she depends on it for income. So last year, she raised prices between May and July, an off-season. She was thinking ahead to the holidays.

“That’s the biggest time of year for us. We can’t afford to be losing money on every order during December,” she said.

The funny thing was, when she did raise prices, people were willing to pay more. Ahmad hasn’t seen sales drop.

Neither has Mark Murrell, CEO of Get Maine Lobster in Portland. “We provide lobster dinners, lobster rolls, fish dishes to anyone in the continental U.S., dock to doorstep,” he said.

He said the cost of lobster at the dock has doubled over the past year. So he raised his prices too. For example, the company sells a lobster roll kit that serves eight people. The price has gone from $160 to $225.

“And that didn’t really impact sales that much,” Murrell said.

Still, a lot of business owners are wary of increasing prices. Katie Stack owns a company in Virginia, Stitch & Rivet, which makes and sells leather goods and canvas bags online.

Stack said the prices she pays for materials, like metal parts and leather hides, have gone up. So while doing some necessary redesigns this year, she also raised her prices. For instance, her olive green cross-body zipper bag went from $199 to $232.

Because as a small business owner, she can’t play games like some of the big retailers, who keep prices the same but start using lower and lower-quality materials, which — if you look closely right now — you might notice.