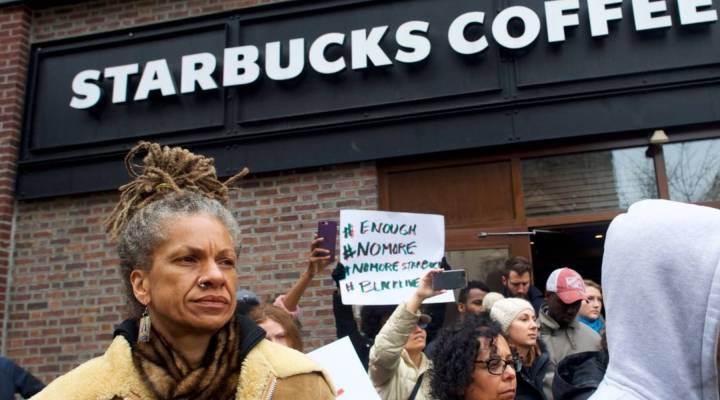 COPY
Protester Michelle Brown, 50, (L) demonstrates outside a Center City Starbucks on Sunday in Philadelphia, Pennsylvania. Police arrested two black men who were waiting inside the Center City Starbucks, which prompted an apology from the company's CEO. Mark Makela/Getty Images

The decision stems from an incident at the coffee chain last week, when a Philadelphia store manager called the police on two black men for trespassing. The two men had been waiting at a table for a friend, who later arrived as they were being arrested. About two dozen protesters took over that Starbucks on Monday, chanting slogans like “Starbucks coffee is anti-black.”

Starbucks CEO Kevin Johnson has called the arrest “reprehensible” and said he wants to apologize to the men “face-to-face.”

Jeanne Bliss, a customer service expert and author of the book “Would You Do That to Your Mother?” joined us to discuss its effectiveness and some of the questions employers need to consider when hiring. Below is an edited transcript of the interview.

Jeanne Bliss: What’s interesting to me is that Starbucks has worked hard to establish themselves as the third place. You know, the place you go besides home or work where you can linger. And so for me, there’s not only a training issue with employees and a communication issue, but also a brand disconnect here. You know, it’s weird to me that they would have booted somebody out because they were hanging out too long. So if you don’t know what else might be happening, of course, unconscious bias enters the picture, but then unconscious bias training has had many, many varied outcomes, as you may know.

Bliss: You know, I think that part of the problem with any kind of training is that it’s situational. It probably has a reasonable to high effective rate. But it’s not 100 percent. So there has to be other things that occur inside of the organization as well, such as a very brand and cultural awareness and understanding of this on an ongoing basis. It has to be talked about. So it’s not a one and done kind of a process.

Brancaccio: So this notion of Starbucks as the third place — not just home, not just work — that would include, “I would like to use the bathroom, please.” And you know if it’s essentially almost a public space, there is this policy that if you don’t buy something, you don’t get to use the bathroom at some of these outlets. There seems to be attention just with that policy.

Bliss: We’ve all walked into an establishment where you feel like you’re being eyed a little bit, right, or assessed. That is also part of this unconscious bias we have: who belongs here. As you are hiring and understanding the human behind the resume, there needs to be that part of the process to really get into. Is there anything there that could come out later that would impact your customer and your culture and your brand experience as well?