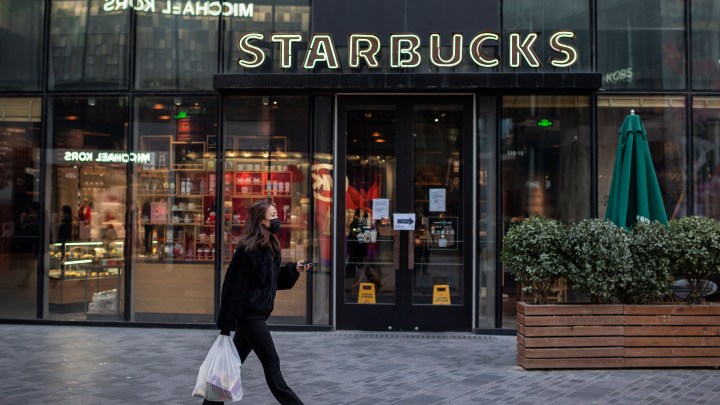 COPY
Starbucks has the resources to weather the COVID-19 slowdown, one analyst says. Above, a woman wearing a face mask walks past a Starbucks in Beijing on Jan. 30, 2020. Nicolas Asfouri/AFP via Getty Images

Starbucks has the resources to weather the COVID-19 slowdown, one analyst says. Above, a woman wearing a face mask walks past a Starbucks in Beijing on Jan. 30, 2020. Nicolas Asfouri/AFP via Getty Images
Listen Now

Global coffee-joint giant Starbucks reported its first-quarter earnings Tuesday after the market closed. Same-store sales were down 5% from a year ago in the United States, as COVID-19 continued to hamper business. But in China, sales rebounded to rise 5% year over year.

Serving up food and drinks has been one of the worst businesses to be in through the pandemic. And Mark Cohen at Columbia Business School said in that kind of business, only the strongest survive.

“Starbucks was a very successful business going into this crisis and will likely find a way through it,” he said.

The company has offset the loss of walk-in, sit-down customers by expanding drive-thrus, online ordering and curbside pick-up.

Starbucks global reach is an asset, too, said Tuna Amobi at CFRA Research.

“China and the Asia-Pacific are actually much further along on the road to recovery compared to the U.S. and Europe, so I think that’s helped Starbucks,” Amobi said.

And while Starbucks has the resources to weather the COVID-19 slowdown, a lot of its coffee shop competitors don’t, said Jim Hertel at Inmar Intelligence.

“Some of the smaller ones and the less nimble ones just aren’t going to come back when this is over,” he said.

Starbucks said it added 278 stores in the final months of last year.