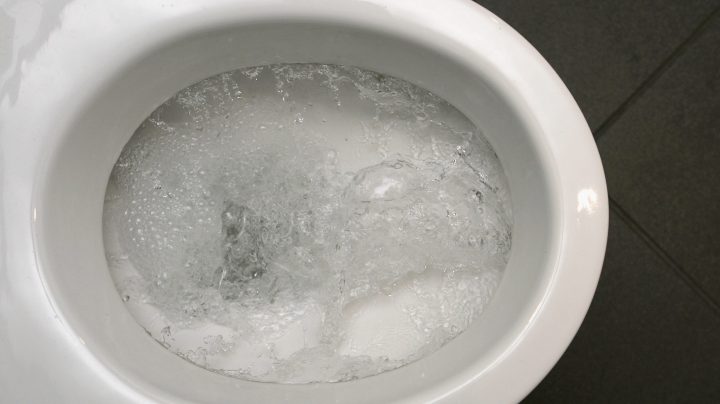 More than 2 million Americans lack access to running water, indoor plumbing or wastewater services, according to a report by the nonprofit organizations DigDeep and the US Water Alliance.

In a new book called “Pipe Dreams: The Urgent Global Quest to Transform the Toilet,” science journalist Chelsea Wald looks at how investments in toilet technology and infrastructure could help combat global problems like climate change and inequality.

The following is an excerpt from the book about the role for-profit businesses might play in solving America’s public toilet problem. Click the audio player above to hear her conversation with “Marketplace” host Kai Ryssdal.

On a spring day in 2018, two young Black men entered a Starbucks in Philadelphia, where they planned to have a meeting with someone who hadn’t yet arrived. They asked to use the restroom, but, since they hadn’t bought anything, the staff refused to give them the key. Then they sat down and waited. Within minutes, a manager called the police, who arrested them. A video of the arrests went viral, and protests erupted online and in the store. The incident rightly became part of a larger narrative about racism and policing in America.

It’s easy to see Starbucks as the enemy in this story — and following the outcry, the company took several measures: it settled with the men for an undisclosed sum, closed all stores for “anti-bias training,” and changed its policy to allow anyone to use the toilet, including those who have not paid. But the problem here is not just Starbucks, or even endemic racism. There’s another underlying systemic issue— namely, that it’s hard to find a public toilet these days, so businesses are filling in the gaps, poorly. In Washington, D.C., an advocacy group performed an inventory and found only two round-the-clock public restrooms in the whole city. They also sent representatives to eighty-five downtown eateries over several years, asking to use the bathroom. In 2014 and 2015, forty-three of those said yes; by 2017, only eleven did. “We don’t want to become a public bathroom,” admitted Howard Schultz, then the CEO of Starbucks, in his public mea culpa. “But we’re going to make the right decision a hundred percent of the time and give people the key.”

In the middle of the twentieth century, public toilets were relatively common in the United States. For the most part, people had to pay for the stalls, which opened with coins, while urinals were free. But with rising feminist sentiments in the 1970s, people started to recognize this arrangement as sexist, since it meant that women had to pay, while men did not. Over the following decade, the grassroots organization Committee to End Pay Toilets in America succeeded in getting bans on pay toilets in many states, and the late March Fong Eu, California secretary of state from 1975 to 1994, smashed a porcelain toilet with a sledgehammer on the steps of the State Capitol.

The banning of pay toilets had an unintended outcome. Instead of free public toilets for all, public toilets pretty much disappeared from American cities, since cities found it expensive and difficult to keep them safe and clean. (In Europe, where there was no such movement, pay public toilets persist, as they have since as far back as Roman times.) And with any remaining bathrooms unsafe, unclean, and in disrepair, they got a reputation for attracting illegal activity. Ironically, this situation, like that of the pay toilets that feminists protested, falls more heavily on women, who need to use the restroom more often than men, especially if they are pregnant or menstruating.

In response to growing grassroots concerns about the lack of public toilets, some have worked to improve their design. High-tech automatic toilets, which clean themselves, hold promise but have often run into trouble, breaking down and sometimes even trapping people inside. On the other hand, the low-tech Portland Loo, from a crack team working for the Oregon city, has earned a fervent following. This “soulless receptacle for bodily waste,” as one admiring reporter put it, is small enough to fit on the sidewalk or in a parking spot. The “defensive” design is maximally inhospitable to people who would want to commandeer it for illicit purposes: no running water inside (the tap is outside), no mirror, metal bars instead of walls at the top and bottom to reduce privacy, a graffiti-resistant coating, and walls of indestructible stainless steel. Some experts advocate bringing back the public pay toilet, for which cities should charge men and women equally. For the poor, cities could implement free token schemes — “toilet stamps,” if you will.

But what if businesses like Starbucks, instead of covering ad hoc for a city’s restroom efficiencies, could become part of a larger solution, providing convenient public toilets that are also comfortable and free? In Bath, England, a large old public toilet was big enough that the city was considering turning it into a one-bedroom house. Then two local women proposed a better idea: turn it into a gift and housewares shop with an attached toilet, which they would maintain and open to the public during business hours as part of their lease. The city agreed.

Similarly, there’s the City of London Community Toilet Scheme and Nette Toilette in Germany, along with like-minded projects that have been popping up worldwide. The idea is simple: a business like a cafe or parking garage agrees to open its toilet up as a public convenience, advertising it with a sign in the window and on an app, and in return the city pays a small stipend to help with upkeep. Some businesses benefit from the free advertising and increased foot traffic that the scheme brings them. As part of an effort to fund new restrooms, Washington, D.C., is planning to run a pilot like this, with an estimated incentive of about two thousand dollars per year to businesses. On the downside, however, one wonders whether businesses can be trusted to treat everyone equally; these types of programs would require oversight if the neediest and most vulnerable won’t be excluded anyway.

In Pune, India, toilets downtown are scarce, especially for women. And, because of the density, there is no room for new buildings. Rajeev Kher and Ulka Sadalkar already had a business providing portable sanitation to worksites and festivals — a profitable enterprise, but not aimed at the poorest. Working with the Pune Municipal Corporation, they came up with the idea of converting thirteen-year-old city buses, which were waiting to be scrapped, into sanitation “health centers” for women. They call them Ti, which translates to “she” or “her” in Marathi, a local language, and also stands for “toilet integration.” A local company paid for the refurbishment, and as of 2020 there were a dozen operational buses in the city of Pune, with more planned in other cities. Trained attendants keep the cheerful black-and-white interiors clean — an improvement over the city’s other public toilets that regularly go out of service or are plain disgusting. They offer two kinds of toilets — “Western” and “Indian” — along with washbasins and diaper stations.

So far, it sounds like a typical public toilet — a costly affair. But they’ve found other ways to boost their revenue by adding pay services such as Wi-Fi, charging stations, laundromats, and cafes.

Sensors in the bus (developed by MIT) alert attendants to when the temperature and humidity change, which warns them when the toilets might get stinky, and scent pads from Firmenich keep them smelling fresh. There’s advertising space on or inside the buses for sale. Kher has said that the inspiration for this comes from the coffee giant itself:

“We’ve perceived it as a Starbucks or a McDonald’s. Many people go there when they have to use the toilet because it is clean, and then end up having a burger or a coffee. Now, move this concept to the end of the pyramid and apply this same logic. Everyone thinks the same way, only the price points are different. You can call our [Ti] bus a ladies’ room or a lounge where women can freshen up and pick up a kokum sherbet on [their] way out.”