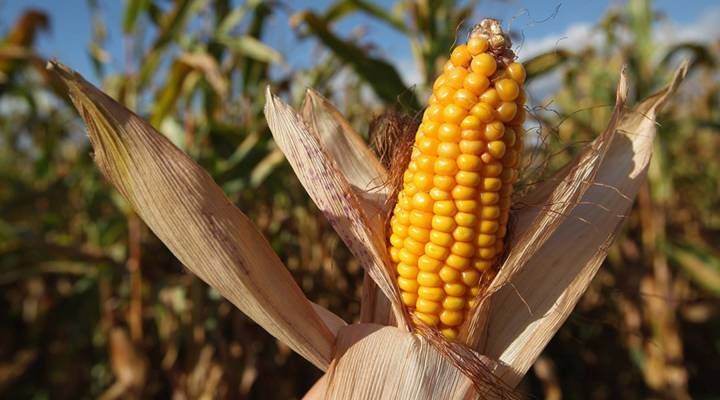 COPY
The photographer holds an ear of corn he found on the ground next to a corn field during harvest on September 13, 2012 near Teltow, Germany.  Sean Gallup/Getty Images

The photographer holds an ear of corn he found on the ground next to a corn field during harvest on September 13, 2012 near Teltow, Germany.  Sean Gallup/Getty Images
Listen Now

On Jan. 23, 2017 — the same day that President Donald Trump formally pulled the United States out of the Trans-Pacific Partnership — Marketplace host Kai Ryssdal talked with Keith Alverson to see how he was feeling. He’s a corn and soybean farmer in Chester, South Dakota and sits on the National Corn Growers Association board of directors. Given the news that the Trump administration is considering the idea of getting back into the Trans-Pacific Partnership (TPP), Ryssdal got him back on the phone today. The following is an edited transcript of their conversation:

Kai Ryssdal: So look it’s been a year-plus, I guess, since we chatted…How’s business?

Keith Alverson: Well you know things have continued to decline. I think USDA (U.S. Department of Agriculture) is predicting about a little over an 8 percent reduction in net farm income and so, you know, from the highs that we saw a handful of years ago, we’re nearly a 50 percent decline in our net farm income level and so, you know, depending upon the farm things can be a little bit rocky out here in the countryside.

Ryssdal: So let’s talk about some of the big picture things that are affecting agriculture nowadays. Obviously the first thing that comes to mind are the tariffs and the trade arrangements that the Trump administration is making. Let’s think first of all about the China tariffs and some of the retaliatory tariffs the Chinese are talking about. How is that impacting you? How’s that affecting you?

Alverson: One of the things that we’ve seen impacted is some of the steel prices. Case in point, I was in the market for a grain bin, over the course of the winter. I happened to lock it in and my dealer called and said, “boy, it’s a good thing you locked it in.” Because after the steel tariffs went on he saw prices increase anywhere from 5 to about 15 percent. So that’s going to affect me, you know, as I continue to look at purchasing equipment and also the sales that he’s able to make. And so those things can have quite drastic impacts.

Ryssdal: Talk to me about big trade issues. NAFTA (North American Free Trade Agreement)…the president said he wants to talk about getting back into the TPP. Whether that happens or not, I imagine you would be in favor of more international trade, right? You send corn overseas and all of that.

Alverson: Absolutely. Mexico’s our No. 1 export partner for corn. They’ve been a big importer of ethanol. The income from trade went fourfold to the American farmers since NAFTA was implemented. So really want to see that preserved. We are excited about the prospect of getting back into TPP. You know, the last time you and I talked, it was shortly after they’d talked about pulling out, or did, and it was really concerning to us because 95 percent of the consumers in the world are outside the U.S. borders, and so we’re really after more markets not fewer.

Ryssdal: When you go down to the John Deere dealer, or, you know, down to the central part of town have a cup of coffee or whatever, what’s the conversation in Chester, South Dakota? What are you guys talking about?

Alverson: You know I think there’s some uneasiness. We come from the part of the country where there were a lot of supporters of President Trump. We thought he was supporting agriculture, supporting farmers and now we have tariff talk and the retaliation. It’s some uneasiness on where things are going and what exactly the endgame is.