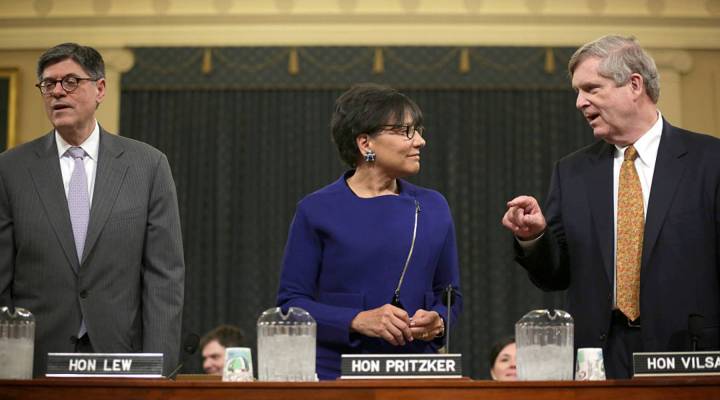 President Barack Obama announced Friday that he would sign an executive order aimed at increasing competition within the U.S. economy. His first target? Cable set-top boxes,  which he claims are growing more expensive and outdated every year. But cable companies are just the tip of the iceberg. According to the Council of Economic Advisers, more than a half-dozen of America’s top employment sectors see their top 50 firms pull in more than a fifth of the entire sector’s revenue. For transportation and retail, that number’s closer to a third.

U.S. Commerce Secretary Penny Pritzker said the government isn’t forcing businesses to create competition, it’s just trying to create an environment where competition can thrive. She joined us to discuss the new order, and to delve into the future of the Trans-Pacific Partnership.

For 20 years, Congress has said, “We need to have more competition in the set-top box.” And now that the technology has caught up to a point where we have content coming at us on the Internet, we have content coming at us on our phones, etcetera. Why shouldn’t we be able, in our homes, to have more flexibility? And that’s really, fundamentally, one of the issues the President’s focused on.

On the Trans-Pacific Partnership:

The strength of a country is often measured by the strength of its economy. One of the things that we’re trying to do in this administration is give our economy as much a chance as possible to grow, and 95 percent of customers are outside the United States, 80 percent of purchasing power is outside the United States. The Trans-Pacific Partnership is an agreement that addresses the fastest growing marketplace in the world — the Asia-Pacific region, where you’ve got a middle class going from 500 million people to 3.2 billion over the next 15 years. This is a marketplace where our companies do not have equal access today. The Trans-Pacific Partnership very much improves the opportunity for American business. And what we know is that American businesses that export create jobs that pay more for Americans here in the United States. So this is about creating opportunity.

On labor unions and opposition to the TPP:

I think it’s a knee-jerk reaction. Any kind of shift has repercussions. One of the things that we’ve been very focused on — as we talk about trade, as we talk about globalization, as we talk about the implications for technology on the workforce — is that we also have to invest in workforce training. And make sure that those folks as the markets change have the opportunity to be re-skilled or up-skilled to meet the jobs as our economies are changing. But that’s gonna happen with or without trade agreements.

The Commerce Secretary on the digital economy’s future