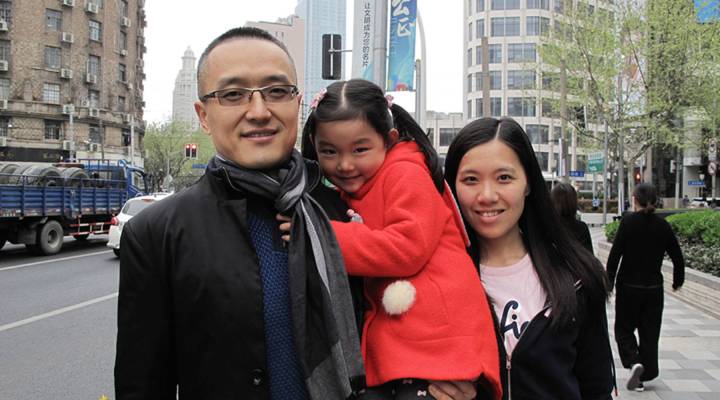 COPY
Roy Ma and his family consume American fruits and nuts but he says the latest China tariffs on these products will not have a huge impact on his life. He is worried about what other tariffs will be imposed as the trade friction escalates. Jennifer Pak/Marketplace
Trade showdown

Roy Ma and his family consume American fruits and nuts but he says the latest China tariffs on these products will not have a huge impact on his life. He is worried about what other tariffs will be imposed as the trade friction escalates. Jennifer Pak/Marketplace
Listen Now

China’s government issued a list of some $50 billion worth of U.S. exports yesterday that could be subjected to tariffs — everything from soybeans to airplane parts.

It described the measure as a defensive move after the Trump administration announced plans Tuesday to hike duties on 1,300 types of Chinese exports, also valued at $50 billion. Neither country has yet imposed the levies.

“Both sides have put their lists on the table,” China’s Vice Finance Minister Zhu Guangyao told reporters on Wednesday. “It’s time for negotiations.”

However, Zhu warned that if talks break down, China will not yield:

“Since the founding of new China in 1949, China has never surrendered to external pressure,” he said.

This tough talk was not echoed by people on the streets of Shanghai who spoke to Marketplace.

“It’s more like political entertainment rather than a real threat for us,” Alfred Yu, who runs a canvas shoe shop, said. “In China’s history, we’ve faced more serious problems than this,” he said. His parents’ generation faced graver challenges, like hunger, social instability and political turmoil. Yu said President Donald Trump is “aggressive” in his negotiations with China, but he said this is all part of the bargaining process.

Earlier this week, China enacted a 15 to 25 percent tariff on 128 U.S. products in retaliation for Trump’s steel and aluminum tariffs. While American producers sent $3 billion worth of these items to China in 2017, they represent only a small fraction what the U.S. exports to China.

This would mean items like American fruits, nuts, wine and pork could cost more for consumers like Roy Ma, whom I met outside a Starbucks in Shanghai:

“My consumption for those kind of things is not quite heavy or big,” he said.

Ma said he was more worried about the Trump administration’s plan to impose further tariffs on Chinese goods. He said he works at a European company in China that sells high-pressure washers around the world. He’s still looking into whether the company could be affected.

China’s State Council said if the United States goes ahead with its proposed tariffs, it will impose duties of equal measure and scale on American goods. The council’s plans include an additional 25 percent tariff on American whiskey, tobacco, orange juice, beef, chemicals, airplanes, certain trucks and SUVs, and most importantly, soybeans.

While China’s list of potentially sanctioned goods hits fewer categories of U.S. exports, the list could spell pain for American farmers. According to the U.S. Department of Agriculture, China is the second-biggest export market for American agricultural products. In 2017, U.S. producers sent $19.6 billion worth of items to China.

“China’s response should follow the principle of precision strike,” wrote Mei Xinyu in an editorial in the China Daily newspaper back in March. He’s a researcher at a think tank associated with China’s Ministry of Commerce.

“Since the trade war is not between China and the American people, but between China and Trump and his protectionist-minded administration. China should first take measures to deal a blow to the industries in the U.S. states that helped Trump win the 2016 presidential election and those states whose political leaders are still backing him in this year’s mid-term election,” Mei wrote.

Most people who spoke to Marketplace in Shanghai were confident that some deal could be reached between the United States and China, but others were not sure.

“U.S.-China relations were harmonious until President Trump came into office,” Eliot Huang said. Huang said if he could send a message to the leader of the United States, he would tell Trump to “go away.”

In reality, however, the economies of China and the United States are so interlinked, each country is bound to the other.