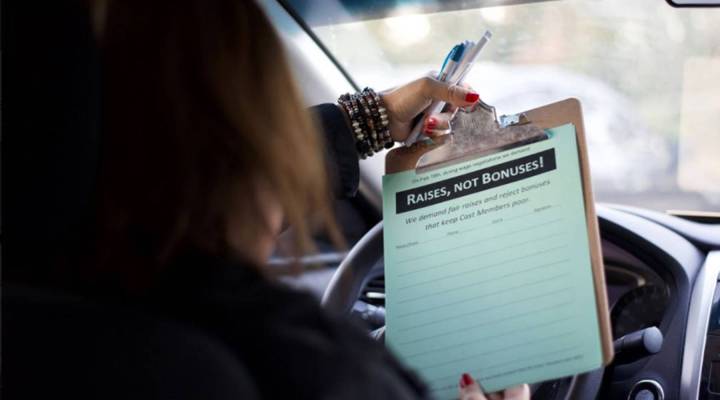 COPY
A coalition of unions representing more than 38,000 Disney employees is in the midst of a dispute over higher wages. Monivette Cordeiro

A coalition of unions representing more than 38,000 Disney employees is in the midst of a dispute over higher wages. Monivette Cordeiro
Listen Now

For the millions of people who visit its theme parks in Kissimmee, Florida, Disney World is a place where magic happens.

For Jon Gilbert, it’s a 9 to 5 — or an 11:30 to 7:30, depending on his schedule. Every shift, he arrives in his uniform: a 1920s-style newsboy cap, a patterned shirt and shorts with black work sneakers. His job is to serve guests at the Hollywood Studios restaurants.

“Sometimes I could be a cashier. I could be working in the kitchen cooking. I might end up busing tables,” he said.

Gilbert lives in the small city of Clermont with his wife, son and daughter. On a good day, 45 minutes and $2.50 in tolls gets him to the theme park.

Gilbert moved from Knoxville, Tennessee, with his family to work for Disney. The benefits are great, he said. He has major medical insurance, with dental and vision, which helps him take care of his daughter, who was severely injured five years ago. He gets free entry to the parks. But he is earning less than he had imagined.

In February, Disney posted $5.2 billion in revenue from its parks and resorts for its first quarter. The company also announced admission and parking rate hikes this year.

“We’re thinking we should be able to get a raise with the increases that they’ve made,” Gilbert said.

At the beginning of March, thousands of Disney World employees received a $250 boost in their paychecks. It is the first installment of a $1,000 bonus that the theme park giant promised to chip off a tax cut that the union has estimated will be about $1.6 billion. For more than 80,000 nonunion workers, the added dollars are a win. But they represent one more hurdle for 38,000 employees the Service Trades Council Union, a coalition of unions in the midst of negotiations for higher pay.

Unite Here Local 737 represents Disney’s food and beverage workers, who are in a wage dispute with the company for higher pay.

The group’s members didn’t receive a tax cut bonus this month from Disney, which is now subject of a labor discrimination complaint under review by the National Labor Relations Board.

“Disney is probably using this bonus issue as a way to put some pressure on the union to come to terms on other contract negotiation issues,” said Joseph Slater, professor at the University of Toledo College of Law. He said the union’s complaint could be valid and that it could also be used to pressure Disney World into budging on its wage proposal.

The company has offered a two-year deal to increase hourly wages for workers by at least 50 cents the first year, then by the same amount the following year.

“Wages and bonuses are part of our negotiation process. We will continue to meet with the union to move toward a ratified agreement,” Disney spokesperson Andrea Finger wrote in a statement. Disney did not respond to a request for comment on the union’s estimate of its possible tax-cut windfall.

“Disney has to listen to the people who work really hard making the magic in the parks and in the hotels,” he said.

In 2014, the union negotiated to raise starting pay at Disney to $10 over a three-year period. And the magical thing about that was other theme parks in the region then followed suit.