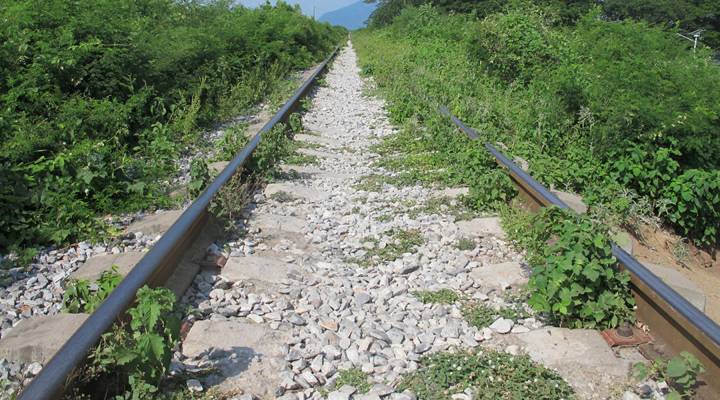 COPY
Train tracks in Ixtepec, Mexico. Marvin Villalobos traveled along this railroad with his three brothers in 2017 on their way to find jobs in the United States. The trip turned fatal for Villalobos when he fell off a train. Levi Bridges/ for Marketplace

Train tracks in Ixtepec, Mexico. Marvin Villalobos traveled along this railroad with his three brothers in 2017 on their way to find jobs in the United States. The trip turned fatal for Villalobos when he fell off a train. Levi Bridges/ for Marketplace
Listen Now

Soon after he climbed onto the freight train known by migrants in Mexico as “The Beast” last November, Francisco Vásquez said he got a bad a feeling.

Vásquez, 32, had traveled with his three brothers from their home country of El Salvador all the way to the state of Sinaloa in northern Mexico. The group was traveling toward Arizona, where they hoped to find work as undocumented immigrants. The four brothers snuck around immigration checkpoints in Mexico, crashed on the floors of migrant shelters and lived through the strongest earthquake to hit Mexico in decades. But after all that, Vásquez still felt like something was wrong when he climbed on the train in Sinaloa.

“I had the feeling that there was an evil spirit on the train,” Vásquez said.

Central Americans pay smugglers up to $10,000 to take them to the United States. But Vásquez and his brothers didn’t have the money to pay a smuggler to take them north. Like many migrants before them, they resorted to hopping on freight trains, following a network of railroads across Mexico toward the U.S. border.

Vásquez reluctantly got on the train in Sinaloa and sat on a small space at the end of a boxcar, where the cars are hooked together, because he was too afraid to climb any higher. His three brothers sat above on the boxcar’s roof. Vásquez called for them to come down, but they chose to stay where they were.

As the train picked up speed, Vásquez watched hot sparks fly off the tracks. Then he heard a loud cracking sound. A low-hanging power line struck his brother, Marvin Villalobos, 28, in the head. He fell off the train toward the ground headfirst.

The remaining brothers jumped from car to car to the front of the train and managed to get the conductor to stop. They got off near the beach town of Mazatlán and police helped them find their brother, still conscious and lying beside the tracks. He died in the hospital from a traumatic head injury a week later.

“We did everything possible to save him,” Vásquez said, “but there was nothing we could do.”

Marvin Villalobos, 28, helps move a set of bunkbeds out of a migrant shelter in Ixtepec, Mexico, badly damaged by last September’s earthquake. Villalobos left El Salvador with his three brothers in 2017 in hopes of finding work in the U.S. state of Arizona. But he fell off a freight train in northern Mexico and died before reaching the U.S. border.

The brothers, who are from San Salvador had tried to start a new life in Arizona just months before the United States ended a program known as Temporary Protected Status for immigrants from El Salvador. That program gave 200,000 Salvadorans protection from deportation. And despite the Trump administration’s crackdown on immigration from El Salvador, many young Salvadorans still take great risks for the chance to work in the United States.

Many Salvadoran migrants today leave the country to escape gang violence or threats on their lives. While Vásquez and his brothers lived in a violent neighborhood in San Salvador, it was the need to find jobs that drove them from home. The brothers grew up raised by a single mother who grills chicken at a street stand in San Salvador. They headed for Arizona with the hope that they could build her a house to live in when she becomes too old to work and pay rent.

Instead the three brothers returned home to their mother in San Salvador with a wooden box full of their brother’s ashes. They were only able to pay for the journey home after locals in Mazatlán, who learned about the tragedy in a local news report, sent them donations.

Vásquez and his brothers are among the thousands of Salvadoran families who have risked their lives for a chance to reach the United States. There are few incentives for young Salvadorans to stay at home. El Salvador suffers from one of the Latin America’s highest homicide rates, largely as a result of powerful gangs like MS-13 and 18th Street that originally formed in Los Angeles. The gangs have not only increased violent crime, but economists believe they also decrease investment and productivity in El Salvador.

Gangs in El Salvador extort most businesses, dealing a serious blow to the country’s economy. The Central Bank of El Salvador estimates that Salvadorans spend $756 million in extortion fees every year — and overall violence costs the country 16 percent of GDP.

Carlos Carcach, a professor at San Salvador’s Higher School of Economics and Business, said that the current environment makes it difficult for El Salvador to attract investment and create jobs. He said tourism, in particular, offers an untapped opportunity to improve the Salvadoran economy.

“We might even have to legalize drugs,” Carcach said, “because there might be tourists looking for different kinds of entertainment and we should be open to that.”

Although Carcach wouldn’t necessarily advocate for legalizing drugs as his first choice to improve the economy, he said that is exactly the sort of creative disruption El Salvador needs to create new industries so young people no longer have to migrate. Carcach said that El Salvador, a country roughly the size of Massachusetts, shares similar characteristics with Japan or South Korea: small, centralized countries where it is easy to develop thriving industries like technology. But so far, similar innovation has not happened in El Salvador.

“They should prepare their kids to come here,” Carcach said. “Especially when the U.S. is sending the message: Look we don’t want you here.”

But U.S. jobs still lure many Salvadorans north. Despite his brother’s death, even Vásquez said he would still try to enter the United States as an undocumented immigrant.

“I’d dare to go again,” Vásquez said, “but only if I can find the money to pay a smuggler to take me.”