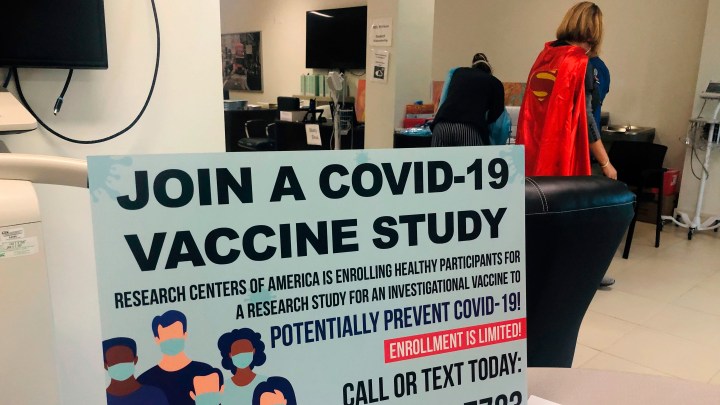 COPY
A sign calling for trial volunteers at the Research Centers of America in Hollywood, Florida, in August. Leila Macor/AFP via Getty Images
COVID-19

A sign calling for trial volunteers at the Research Centers of America in Hollywood, Florida, in August. Leila Macor/AFP via Getty Images
Listen Now

Some COVID-19 vaccines are already in use. But the clinical trials roll on. In fact, researchers are still recruiting participants. And they’re particularly focused on signing up people who in the past have tended not to be part of clinical trials.

“We want folks from all different ethnic backgrounds, because it’s possible that the vaccine works better in one group or lesser in another group. And the only way to find out is to test it,” said Dr. Stephan Sharp, who leads a vaccine trial site at Clinical Research Associates in Nashville, Tennessee. He recently held a Facebook event with Kurdish young professionals.

Sharp will be recruiting new patients for at least the next few months, since the trials will continue for years to see how long the vaccines are effective.

Sharp hosted an informational presentation at a mall on the Southeast side of Nashville recently, called Plaza Mariachi — with an arcade, food court and souvenir shops.

Most people watched the pitch, translated into Spanish, through Facebook Live. But Rolando Figueroa heard an ad for the event on Spanish-language radio.

So the 36-year-old plumber came to see in person. He said his family has so far been spared by COVID-19. But he’d like to get the vaccine sooner rather than later.

“If one of my family members get sick, I want to see if we can figure out how to get the vaccine,” he said in Spanish.

Figueroa has the kind of background pharmaceutical companies are looking for. He’s originally from Mexico. Latinx patients are underrepresented in typical clinical trials, as are Black participants. And yet they’re disproportionately affected by this pandemic, with higher rates of infection and mortality compared to other Americans.

While Figueroa doesn’t need much convincing, Susana Vasquez — who is also listening — said recruiters have many doubts to overcome. Her family is also originally from Mexico, and she said people in her community were skeptical about even getting tested for COVID-19.

“Because they thought they would have to give their information, immigration status, or whatever,” she said. “So I think that would also play a role in being part of the clinical study.”

It’s an even bigger leap, she said, to agree to be followed in a clinical trial for years, even if it’s not directly by the government.

The manufacturers farthest along with their COVID-19 vaccines have had more success than usual signing up patients from diverse backgrounds.

But signing up diverse patients can be especially slow since the researchers, themselves, tend not to be diverse.

“We’ve known this problem for years and years, and the way the industry has approached it — and there’s nothing wrong with this — is to teach cultural sensitivity to investigators,” said Jim Kremidas, executive director of the Association of Clinical Research Professionals.

Far more effective for recruitment, Kremidas said, is when the researchers share the same cultural background as their participants. So this year, as clinical research firms have had to staff up, Kremidas said they’ve been intentional about making diversity more of a priority in their hiring.

“We believe that’ll make it easier to build trust and have effective communication between the investigators or the researchers at the site and potential patient populations to volunteer for studies,” he said.

Institutions that already had deep connections with underrepresented communities, like historically Black medical schools, have been a step ahead in recruiting more diverse trial participants.

“You can’t just like show up and expect people to kind of get on board,” said Rachel Hardeman, a professor who researches health equity at the University of Minnesota.

“It does take very intentional effort and time to engage people in a way that feels good and feels trustworthy,” she said.

And building trust is important, for groups that have historically faced disparities in treatment or have been the subject of unethical medical research in the past.

Even for those who don’t participate in a clinical trial, public health advocates hope the outreach will improve trust in the vaccine itself. That way, more people will take the vaccine when it becomes available to them.