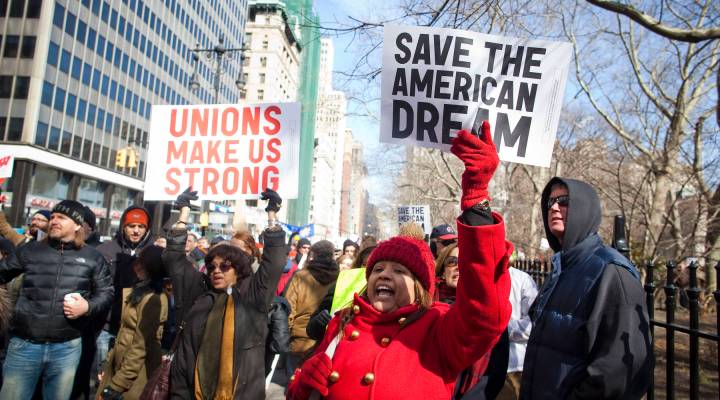 Demonstrators rally in front of city hall in solidarity with union workers across the country on February 26, 2011 in New York City. Michael Nagle/Getty Images

Demonstrators rally in front of city hall in solidarity with union workers across the country on February 26, 2011 in New York City. Michael Nagle/Getty Images

Before Mark Janus gets his paycheck, a number of things get deducted: taxes, Social Security and Medicare. And then a small portion of Janus’ paycheck goes to the American Federation of State, County and Municipal Employees, a union that negotiated his contract. Janus is not a union member, but he is required to pay what is called a “fair-share” fee that covers the union’s costs of negotiating and maintaining a contract.

Those fair-share fees are controversial. Janus, who works in Illinois, sued AFSCME, arguing it violated his free speech, and the Supreme Court is hearing his case today.

But had Janus lived in one of the 28 states that have “right-to-work” laws in place, he wouldn’t have had to pay the fees in the first place. These laws allow workers covered by a union-negotiated contract to opt out of paying the fair-share fee.

In the South, right-to-work legislation has been on the books since the 1940s when these states decided to use low unionization as an incentive to attract business investment, according to Barry Hirsch, a labor economist and a professor at the Georgia State University.

But recently the movement has begun to creep north. In 2012, Indiana and Michigan passed new right-to-work laws, followed by Wisconsin in 2015, West Virginia in 2016 and Missouri and Kentucky in 2017.

“In the past, going back 40, 50 years ago, and particularly in the northern part, people had either parents or relatives who were union members. Or next-door neighbors,” said Hirsch. “Whereas in the South, a large proportion of people would grow up not knowing anyone who is a union member.”

Union organizers in states like Tennessee are hoping to change that. Since 2010, the number of union members in Tennessee has grown from 115,000 to 155,000. Still, only 5.7 percent of Tennessee workers are members of a union.

How to grow a union in the South

To Patrick Green, even one new member is a big deal. Green is a president of Local 1235, which is part of the Amalgamated Transit Union in Nashville, Tennessee. In the three years that he has been leading the union, the local’s membership rate went up by 36 percent, despite being in a right-to-work state.

“I am a native Nashvillian,” Green said. “Right-to-work is all I’ve ever known.”

Before Green became a president of his local union, he was “a fair quiet bus driver” that “didn’t cause any problems.” As years went on, Green, who had worked in management in the past, felt that the union did not always do its best to represent the workers’ interests and that it was not as transparent as it should’ve been when negotiating contracts.

But instead of leaving the union and not paying his union dues, Green and two of his friends decided to run for leadership positions so that they could turn things around.

“I had no union background, no union experience, was just a member and saw an opportunity to help the local that is here in Nashville, Tennessee,” he said. “I felt that the leadership that we had at the time, they weren’t equipped to handle the changing workplace that we were facing.”

In June 2015, Green was elected president of Local 1235. At the time, its membership rate was just around 50 percent. But he didn’t view Tennessee’s right-to-work laws as a death sentence — instead, he saw them as something that forces the union to try harder to connect with the workers it is supposed to represent.

“We had a lot of disgruntled members, which is by design in a right-to-work state,” Green said. “We have experienced generations of people who believe that unions were bad. … They just take your money. They abuse you. They don’t do anything for you. And so we discovered during the process of running for the union president that we had to internally change the mindset of the members that we actually had.”

Green found that the most effective way to find out what mattered to his members was to ask their families. Many workers’ families depend on the benefits covered by the union’s contract.

“We actually have separate planning sessions for spouses where we look at spouses, husbands and wives, and we said: ‘What do you need? What do you need for your family? What can we do better as it relates to our benefits? How can we best support the family?’ And you would be surprised at how engaged people actually get.”

The new approach helped change the mindset of a number of the union’s members.

“When I first took over the local a few years ago, we were effectively just south of 300 members. We were more in the 270 to 280 range,” Green said. “Today, we have about 460 members out of an eligible group of about 530. And so we are effectively closing that gap quickly.”

Green attributes that to happy union members who spread the word about the benefits of being in the union.

In states like Tennessee, where so few people belong to a union, unions face an important task of getting the word out about what they have to offer. Every quarter, members of Local 1235 volunteer in their community. Green views it not just as a team-building exercise, but also as a way to do community outreach and let Nashvillians meet union members.

“Our stigma here is so bad in the South. Most people are ashamed to tell their neighbors that they are in a union,” he said. “And we actually want to change that. Because we’re human beings, too. We’ve just made the decision that we want a workplace that is fair and one that treats me with dignity, and we’re not afraid to speak out.”