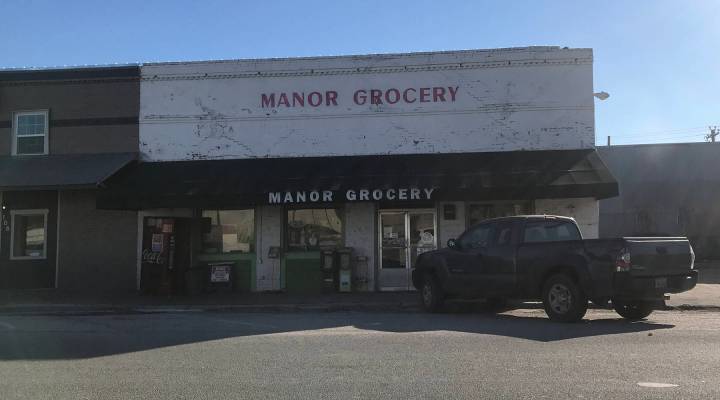 COPY
Manor is a town of about 8,000 people in the Texas hill country. About half of the population is Hispanic or Latino and many haven't obtained legal citizenship status. Andy Uhler/Marketplace

Manor is a town of about 8,000 people in the Texas hill country. About half of the population is Hispanic or Latino and many haven't obtained legal citizenship status. Andy Uhler/Marketplace
Listen Now

A new Texas law took effect this year: SB 4. Under SB 4, if local law enforcement officers don’t cooperate with federal immigration agents, they’re breaking the law. So it’s now illegal to be a sanctuary city in Texas. A number of sheriffs in metropolitan area, including Dallas and Houston, have said they still won’t hand over undocumented people to federal Immigration and Customs Enforcement (ICE) agents. But what about people without legal citizenship out in the countryside? Many people there are facing the new reality of living in fear.

Ed and Britt live with their three young sons in Manor, a small town in the Texas hill country. Ed works in construction. We aren’t using the family’s last name because Ed’s living in the U.S. illegally and has been for 15 years. He’s afraid of being deported.

“I am more concerned about my safety than I have ever been,” he said.

He doesn’t have a drivers license, so even his commute to job sites is illegal. On the job, he sees workers like him keeping as low a profile as possible, including when they take lunch breaks.

Ed said his fear fluctuates depending on where he’s working. In Austin he knows Travis County Sheriff Sally Hernandez has pledged not to detain people like him. But his boss takes jobs all around central Texas. Ed said he gets nervous working just 10 miles up the road.

“When I drive north, it’s not the same feeling,” he said. “The Williamson County sheriff has pledged allegiance to Trump and supporting SB 4. So I’ve just learned to sort of suck it up, you know?”

Ed’s wife, Britt, a native Texan, worries when he’s on the road. Ed was deported to Honduras as a 17 year old after he was convicted of shoplifting a T-shirt from a shopping mall years before she met him. He paid for a coyote to sneak him back into the U.S. after deciding Honduras wasn’t safe for him. Because of his deportation, their marriage alone doesn’t qualify him for citizenship.

Living outside the city, Britt said she fears ICE knocking at the door. She said the family worries less when they’re in Austin, where there are support groups, nonprofits and immigration lawyers.

Out in Manor, most of the responsibility for protecting undocumented people falls to churches.

Alex Montes-Vela is the priest at St. Mary Magdalene Episcopal. He’s been reaching out to undocumented and split-status families since the new Texas law passed. “We were offering classes to give them some tools and knowledge in how to deal with ICE,” he said. “People were not comfortable enough to get out of the house and come to the church to receive this information because they were scared.”

He said he’s given many families the access code to open his church doors at any hour. Should they need to flee authorities, they can take sanctuary there.