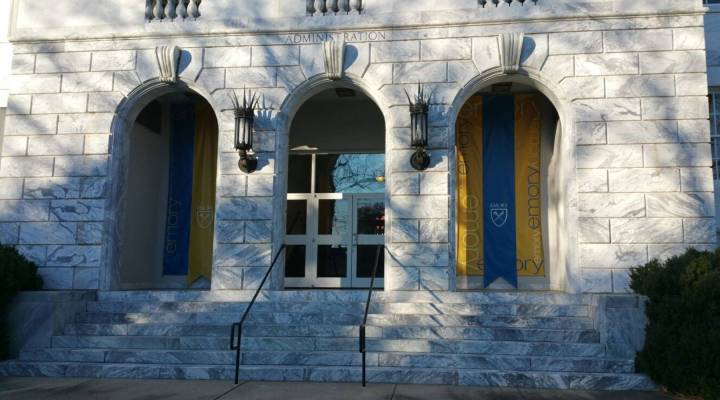 COPY
Students, staff and faculty members walked out in protest and gathered in front of this administrative building at Emory University in February to pressure the university's new president Dr. Claire Sterk to label the university as a "sanctuary campus." Tasnim Shamma/WABE

Students, staff and faculty members walked out in protest and gathered in front of this administrative building at Emory University in February to pressure the university's new president Dr. Claire Sterk to label the university as a "sanctuary campus." Tasnim Shamma/WABE
Listen Now

The word “sanctuary” is being used these days to describe cities and organizations that show support for undocumented immigrants in the U.S. and one place where that word has become a sticky topic is at Emory University in Atlanta.

That’s because any private school in Georgia that adopts “sanctuary policies” could lose state funding. So Emory’s president Claire Sterk is opting to call the university a “safe harbor” instead.

On the day Sterk was inaugurated as Emory University’s first female president, students and faculty members staged a walkout. Students like Chelsea Jackson demanded Sterk go beyond calling the University a “safe harbor” for students who are undocumented, or have Deferred Action for Childhood Arrivals (DACA) status, and declare itself a “sanctuary campus.”

“Our membership at Emory in this community should protect us on this campus. And we have members who may not be members of the United States and as their fellow members, it is our responsibility to stand with them, to protect them so they cannot be ripped out of our classrooms,” said Jackson said at the rally. “It is not enough for Emory to admit DACA students and not protect them.”

Assistant professor Subha Xavier said more needs to be done to protect students. Xavier is a former refugee from Sri Lanka who grew up in Canada and now teaches French at Emory.

If the University adopts “sanctuary” policies, limiting its cooperation with law enforcement, it could lose state funding.

That’s because Georgia lawmakers are taking up House Bill 37 in the state legislature, which would strip state funds from private universities adopting “sanctuary” policies.

“Lawbreaking 101 is not an acceptable course in our universities,” Ehrhart said. “If you don’t follow the law, then public funds, state funds, are not going to follow you.”

Still some students and faculty members said they want Emory to be on the “sanctuary campus” list.

“See we’re a university that has a privilege, and that privilege is that we’re private, and we can do what we want,” Xavier said. “President Sterk, we will stand with you. We are here to give [you] courage.”

In a letter to a campus group, Sterk wrote, “there are many who interpret a university’s declaration of sanctuary status to be a commitment to disobey federal law.”

María Pabón is the former dean of Loyola University’s law school in New Orleans. She said the declaration of sanctuary campuses is similar to the concept of sanctuary cities. However, she said, it’s not likely that immigration officials would seek out undocumented immigrants on college campuses.

“ICE and Homeland Security, they do not typically do enforcement on universities and churches and such,” Pabón said. “The undocumented student would be very low priority, a lot of them have deferred action for childhood arrivals from the previous administration, so they do have permission to be here.”

But Pabón said she understands why Sterk is hedging on using the word “sanctuary.”

“There’s a political aspect, right? Because you appear to be condoning illegality,” Pabón said. “If you declare yourself a sanctuary campus and you say ‘I’m not going to cooperate,’ you might be seen as saying ‘I don’t want to cooperate with enforcing the law.’”

Pabón said she often has to remind people it’s a civil violation, not a crime, for students to be undocumented.