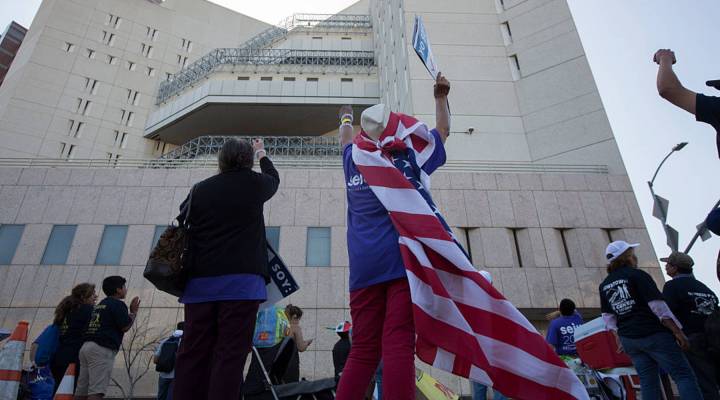 COPY
People wave and call "We are here" and "You are not alone" in Spanish to immigrant detainees at the Metropolitan Detention Center during one of several May Day marches in Los Angeles earlier this year. David McNew/Getty Images

People wave and call "We are here" and "You are not alone" in Spanish to immigrant detainees at the Metropolitan Detention Center during one of several May Day marches in Los Angeles earlier this year. David McNew/Getty Images
Listen Now

As part of his 100-day action plan, President-elect Donald Trump has pledged to block all federal funding to sanctuary cities.

What is a sanctuary city? Here’s what it means to 22-year-old Thais Marques, an undocumented immigrant who lives in the sanctuary city of Newark, N.J.: “It means that I can be safe in my own city,” she said. “If I get pulled over or if something happens, I know that my family won’t be detained and I won’t be detained.”

More than 350 counties, cities and states are so-called sanctuaries. There isn’t a legal definition for a “sanctuary city.” But, generally, these places have policies, police department orders or nonbinding resolutions that limit government officials from cooperating with federal immigration enforcement.

“It isn’t the duty or the obligation of a local police officer or social worker to inquire about a person’s immigration status or to enforce those immigration laws,” said Dan Kesselbrenner, executive director of the National Immigration Project of the National Lawyers Guild.

Without much detail from Trump, it’s not clear how much money Chicago could lose, Mendoza said. But, she added, it’d likely be in the hundreds of millions of dollars.

Chicago, along with cities like New York, Los Angeles, Seattle and San Francisco, have pledged to remain sanctuary cities despite Trump’s promise.

“It doesn’t do Chicago any good to have an immigrant who’s hiding and living in the shadows,” Mendoza explained. “We want people to be productive members of the city and proud to live here.”

About $478 million comes from the federal government.

“Five percent of the budget is fairly significant,” Campbell said.

At the very least, the city could lose grants for housings and community programs, she explained.

“There are also a lot of criminal justice grants that show up in the police and adult probation budgets,” she added.

Earlier this year, the Senate blocked a bill to cut federal funding for sanctuary cities — it would have stripped away community development grants that, for example, provide housing to low-income families.

“The resolutions and the amendments of these bills have been written up,” said Alex Nowrasteh, an immigration policy analyst at the Cato Institute. “The idea has been out there for a long time.”

With a Republican Congress and a Republican in the White House, a law to cut off sanctuary cities is certainly possible, he said.