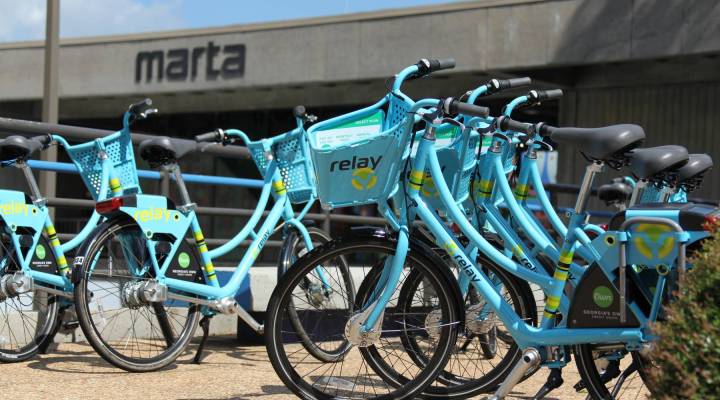 COPY
Atlanta’s Relay Bike Share lets people rent bikes by the hour or by the day. Drop off points near transit hubs and popular destinations give MARTA riders a last mile option. Photo courtesy of MARTA

One of the biggest puzzles for public transit organizations usually isn’t how to get people from one bus stop or train station to the next — it’s how to get them all the way home. This is called the last mile problem and it turns out it’s a big challenge for package delivery too. Working separately to solve the problem, the two industries are coming up with similar solutions.

Many people in cities tackle their last mile problems by taking the bus. If it stops right in front of someone’s home or workplace, that’s easy. But, what about people who don’t live on a bus route?  Or, who live on side roads that prohibit all large vehicles, even delivery trucks?

Metropolitan Atlanta Rapid Transit Authority’s Ben Limmer says his organization is working on that problem. “MARTA is looking at more innovative solutions to help route some of our community circulator buses,” he said. Those are smaller buses, kind of like airport shuttles. Some run on fixed routes, and some will operate like ride shares. “These would be more like [an] Uber or Lyft type technology,” he explained.

MARTA already partners with those companies. Now, it plans to launch its own version of ride-sharing this year. It’s called a flexible transit pilot program. MARTA got a private grant for it, but the Federal Transit Administration has also given out grant money to spur this kind of innovation nationwide.

MARTA is also using bicycles to solve the last mile problem. “You have access to the city’s Relay bike share, where you can rent a bike either by the hour or by the day,” Limmer explained. Bikes solve a big last mile puzzle: how to get people and packages into places large vehicles can’t go. In fact, a few miles north at the headquarters for the United Parcel Service, right in the UPS lobby, is a huge, electric tricycle. On top of the two wheels in back is a compartment for packages that makes the bike look like a mini-UPS truck.

Ed Rogers is a senior engineer with UPS who works on the last mile problem. “So, what is good about this type of vehicle is we are able to get into areas where traditional, large delivery vehicles are prohibited,” he said.

Some online retailers, who are dropping off more single packages at homes instead of stacks of them at stores have started to innovate as well. Amazon is trying out drones for delivery. FedEx is experimenting with robots.

UPS created its own, elaborate computer program. It’s the same idea as the MARTA app, but much more complicated. It’s called ORION, which stands for the On-Road Integrated Optimization and Navigation system. Every day for every UPS driver, it calculates more than a trillion possible routes. Then, it picks the best one.

It took more than ten years to develop ORION. Rogers won’t say how much it cost UPS, but he does say it was worth it.

So, how are all these different organizations coming up with similar last mile solutions?

“They would be industrial and systems engineers.  They would be computer information systems analysts writing the code, writing the algorithms,” explained Walter Wallace.  He runs the Global Logistics RoundTable at Georgia State University.

Wallace said all those jobs fall under a field called telematics. It basically involves getting as much information as possible, analyzing the numbers and then using them to travel efficiently. That work is in high demand. “It’s a complicated, complex world, but today’s mandate is analytics,” he said. “It’s no longer an option.”

That’s true whether sending a package, or sending people home on a bus.