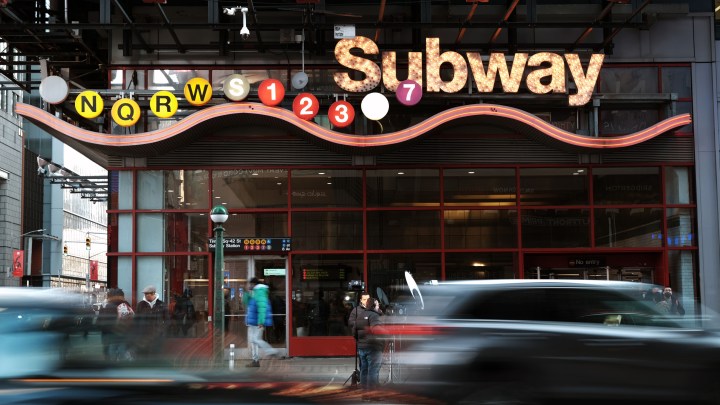 Last week, the Metropolitan Transportation Authority announced that Richard Davey, a former secretary of transportation in Massachusetts, will be the next president of New York City Transit, the city’s bus and subway system.

When he takes over in early May, it will be no easy gig. Both the city’s subway and bus systems are struggling to roar back to their pre-pandemic levels. (Right now, each is carrying a little over half of its pre-pandemic ridership.) That’s on top of severe flooding issues, long wait times and a spike in crime.

New York City’s subway system was also catapulted into the national spotlight earlier this year when 40-year-old Michelle Go was pushed onto subway tracks before an oncoming train. In response to the public outcry surrounding anti-Asian violence and other crimes, the MTA announced a pilot program that would place protective screen doors at three stations throughout the city.

It’s a step toward modernizing and making the 117-year-old public transit system safer. The technology for platform doors has been around for decades and transit and public safety advocates point out that other countries have already installed the safety systems that could have prevented Go’s death — and the deaths of hundreds of others.

One of the reasons New York City’s transit system has been behind the curve? A big fat sticker price. The installation of screen doors at three stations is estimated to cost around $100 million, with a completion pegged for sometime in 2024.

The MTA also released a feasibility study from 2020 — totaling nearly 4,000 pages — looking into the cost and viability of platform doors. It estimated that installing platform doors at 128 stations (roughly a quarter of all MTA stations) would cost somewhere in the ballpark of $7 billion.

It costs a lot to build in the U.S.

“We do spend a lot more money here in this country, and it seems to be particularly acute in New York. But the kind of a cost per mile of building new transit, you know, is substantially higher than other developed countries with similar economies and democratic structures,” said Paul Lewis, policy director of the Eno Center for Transportation, a nonprofit think tank.

Take transit projects in Paris and Madrid, for example — they cost around $160 million to $320 million per mile, according to an analysis by the Eno Center. Similar investments in the U.S. cost far more.

Los Angeles’ Purple Line, for example, clocked in at $800 million per mile and San Francisco’s Central Subway cost around $920 million per mile. And the heavyweight? New York City’s Second Avenue Subway, at a per-mile cost of $2.6 billion. (Oh, and don’t forget New York’s East Side Access tunnel. That came in at a cost of $3.5 billion per mile of track.)

According to a 2021 Eno Center analysis, the U.S. spent an average of 50% more on a per-mile basis for both at-grade and tunnel transit systems than other peer countries. Highways and roads are costly, too. A 2019 paper from the Brookings Institution found that spending on interstate construction more than tripled from the 1960s to the 1980s.

Meanwhile, a report card by the American Society of Civil Engineers gives U.S. infrastructure an overall grade of C-.

There isn’t one particular reason why exactly infrastructure and transit investments cost more in the States; rather, it’s a myriad of reasons.

One big reason has to do with a failure to invest in transit infrastructure over time, said Eric Goldwyn, assistant professor and program director of the transportation and land-use program at the NYU Marron Institute. Goldwyn is also involved in the Transit Costs Project, which compares the costs and conducts case studies for transit projects across the globe.

“In Paris, for instance, they’ve been continually building and improving and upgrading and expanding their [subway] system, you know, for about a century now. While in New York, we basically took 60 to 70 years off, and we’re not sort of maintaining our system.”

Meanwhile, transit in the U.S. is sorta like “you patch and bandage and sort of slap together, you know, whatever you can to make it work, rather than doing a fully healthy transit system,” Goldwyn added.

Part of the bandage solution process causes future headaches. In New York City’s subway system, for example, rail cars of varying ages have doors located in different locations — that makes the installation of platform doors all the more thorny.

“We seem to miss the mark on the governance piece. The institutions that we have that build transit, that maintained transit are not always adequately prepped and able to do that — from a board standpoint, from a structure standpoint, from an authorities standpoint,” Lewis said. “And these projects are not sort of in a vacuum. They become projects about, like, ‘how do I satisfy all these other people who can potentially stop my project?’”

Time is money, especially as it relates to infrastructure. And all of these processes (and delays on those processes) can balloon the costs of a project.

How do we pop ballooning budgets?

It’s a great question with a complicated and (kind of unsatisfying) answer.

The $1 trillion infrastructure bill signed into law late last year means a much-needed boost to investments in roads, bridges and, yes, transit. Though it is a historic investment, many argue it’s still not enough to wholly repair, expand and modernize transit systems.

But solving a myriad of problems takes a myriad of solutions. The Eno Center’s 2021 analysis put forth a list of recommendations revolving around three key themes: governance, standards and processes.

In short, it’s about working smarter not harder to ensure that historic investments get a bigger bang for their buck. As the Eno Center’s Paul Lewis said, there’s never an unlimited pool of funds. So priorities get weighed and sometimes it takes political pressure — like that which took place after Michelle Go’s death — to energize demand for transit updates.

But things like platform doors mean that other priorities get reshuffled. For example, roughly only a quarter of NYC subway stations are handicap accessible, though the MTA aims to make 100% accessible by 2034. And the subway’s signaling system — which dictates how many trains can run and passengers can be carried per hour and literally dates back to the Great Depression — has been a slow burn.

On top of that, Lewis said, as catch-up is being played in updating the New York City subway system, a simultaneous, future-looking mind shift may need to occur. The transit system is largely oriented on a downtown commute. Though Mayor Eric Adams has encouraged workers to return to offices, it’s unlikely all will. So what would transit look like if it was designed knowing that more folks would be working from home? How would that shift how we thought about transit design and infrastructure?

In other words, how do we invest in transit now to accommodate a world we may not even recognize down the line? Guess that’s the $1 trillion infrastructure question.