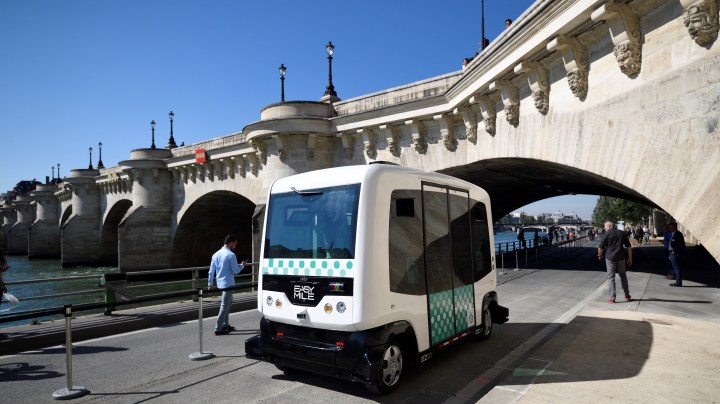 COPY
The Paris transit authority tests a driverless vehicle in 2016. An autonomous shuttle has been taking people to the Bois de Vincennes on weekends since January. Eric Feferberg/AFP via Getty Images

The Paris transit authority tests a driverless vehicle in 2016. An autonomous shuttle has been taking people to the Bois de Vincennes on weekends since January. Eric Feferberg/AFP via Getty Images
Listen Now

Waiting for a robobus, Annick Breton and her daughter Léa are a little apprehensive about riding in a vehicle with no human driver.

“You’re always going to be a bit frightened, but I read there’s someone from the transport authority on board just in case, even if he’s not the driver,” Breton says, speaking in French.

The shuttle is a boxy vehicle the size of a large minivan. As it advances, one of the two conductors tells people there is a limit of six people, the maximum that can come on board.

The driverless shuttle bus heads through traffic for part of the route to a park called the Bois de Vincennes. At the moment, it’s a curiosity for passengers, but Parisian transit officials believe driverless vehicles will soon be playing an important role in public transportation.

The bus navigates a couple of busy junctions, through stoplights fitted out to tell it when to stop and go. Progress, though, is painfully slow. Top speed is maybe 10 miles an hour. And our average speed is more like half that.

“For example, last-mile mobility when you’re out of the train line at the terminus for people that take cars to go from their home to that terminal station, so that they don’t take their car and they have full public transport from their home to their destination,” he said.

But before these vehicles are used to pick people up at home, transit officials may have to work out a few kinks. This shuttle slams on the brakes whenever a car, pedestrian or cyclist comes within 3 feet

At one point it gets stuck until a conductor takes over the controls.

This free weekend service began in January. The transport authority now also operates two driverless subway-to-office shuttle services for companies and plans to start others over the coming year.