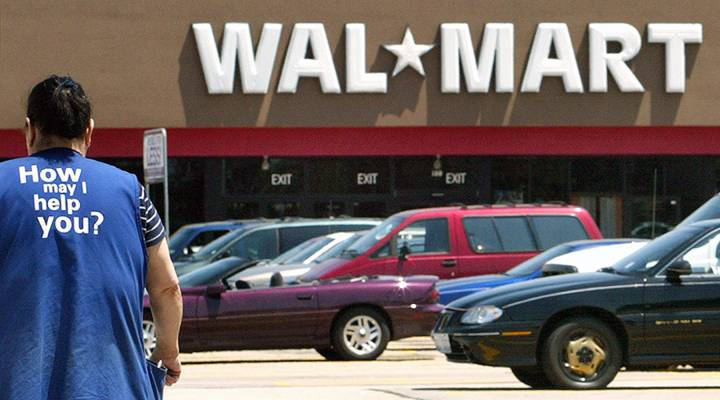 COPY
A female Wal-Mart employee walks through a parking lot as she returns to work at a Wal-Mart store June 23, 2004 in St. Charles, Illinois. Tim Boyle/Getty Images

A female Wal-Mart employee walks through a parking lot as she returns to work at a Wal-Mart store June 23, 2004 in St. Charles, Illinois. Tim Boyle/Getty Images
Listen Now

Shaheim Wright’s house is falling apart. It’s infested with bedbugs. The washing machine is broken. He needs a new sink. Oh, and there’s the crack in the bathtub.

“It’s leaking out, and right near my door is a wet spot from water coming down,” Wright said. “And it’s like, well I can’t pay for any of this.”

The house is a big brick duplex with a lawn in Philadelphia. Wright, who is 19, lives there with his mom, his sister, and friends of the family. He pays half the $700 mortgage with his job at PetSmart. He’s a pet care associate (mostly a sales job) making $8.75 an hour. His schedule changes constantly — 10 hours one week, 40 the next — so his paycheck is in flux too.

Wright wants to be a veterinarian. He started college but dropped out because he couldn’t afford it. Working retail, he often ends up asking his family to borrow money.

“It’s embarrassing, because I don’t want to have to be like, ‘oh well, you know, I’m in that tight space again, could I borrow like a hundred dollars?'” he said. “And not everyone has it.”

Retail workers make up a tenth of the American workforce. The industry includes grocery stores, fast food places, department stores and family-owned shops. A third of the jobs are part time, and on average, workers make $10 to $12 an hour. Workers’ schedules change a lot, and the jobs tend to offer few or no benefits.

That reality can make it hard for the industry’s nearly 16 million workers to pay their bills.

A recent survey from the Center for Popular Democracy, a workers’ advocacy group, asked more than 1,000 retail employees about their finances over the past year. The survey found that 45 percent of retail workers borrowed money from friends or family. About 40 percent had to put basic expenses on a credit card and 12 percent had taken out a payday loan.

Carrie Gleason, a director at the group’s Fair Workweek Initiative, says things are getting harder for retail workers.

“Rents are skyrocketing,” Gleason said. “The cost of transportation is increasing. And workers’ incomes are not keeping up. And so to get by, people use all sorts of strategies to make ends meet.”

Avery Terry relies on credit cards. He’s 30, and he grew up in rural North Carolina. He got a bachelor’s degree in social work, but couldn’t find a job in his field. So he kept working the retail job he’d had during college, as a sales associate at the shoe chain DSW. He ended up a manager, earning $14 an hour. It’s not what he wanted for his life

“I knew I had to go somewhere where I could get me a job, like a better paying job, and not end up, you know — stuck,” he said.

Terry moved to Manhattan for a master’s program in urban planning at Hunter College. To pay his bills, he works part time at DSW for $15 an hour.

He lives with roommates, paying $950 a month in rent. He’s racked up $4,500 in credit card debt. He just tries to make his minimum payments on time.

“Yeah, right now, it’s definitely the minimum,” Terry said. “If I worked more and my check is a little bit bigger, like, I’ll probably throw a little bit extra in.” He graduates in May and says he hopes to leave retail behind.

April Law, who is 51 years old, got her first retail job 30 years ago. Now, she works at a Walmart in Dunnellon, Florida for $10.25 an hour. She can’t get full-time hours, and her schedule changes week-to-week.

She recently quit her second job as a hotel maid. “It was killing me so bad that I was getting so overtired and not being able to spend time with the little one,” Law said.

The little one is her six-year-old, Naomi. Law struggles to pay for the family’s housing, bills, and childcare needs.

“I’m always like two or three hundred dollars shy of keeping me going for two weeks,” she said.

Law uses payday loans to borrow against her future paycheck. Every two weeks she takes out about $200. When she pays it back, she owes $22 in interest.

Walmart just announced it’s raising its starting pay to $11 an hour. Law says that’ll help. But what she’d really like is a full-time job.