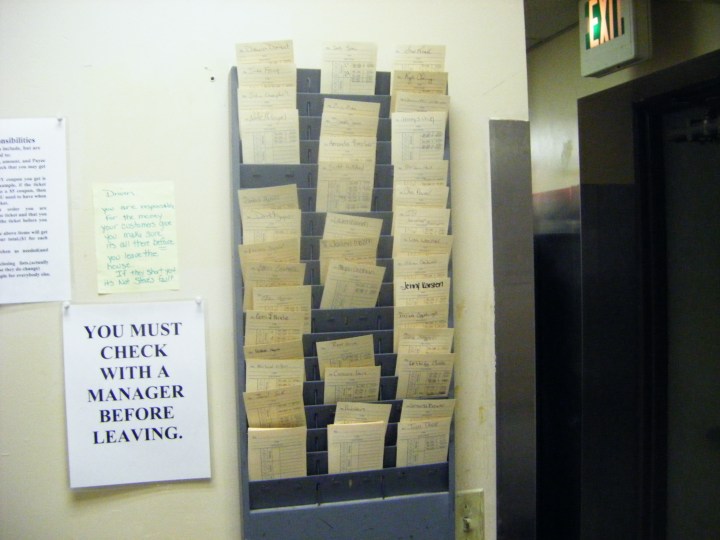 COPY
Many retail and service workers have to work night shifts and then return to work the next morning, dubbed "clopening." Bradley Gordon via Flickr
Workplace Culture

Many retail and service workers have to work night shifts and then return to work the next morning, dubbed "clopening." Bradley Gordon via Flickr
Listen Now

To compete in a tight labor market, retailers are stepping up their efforts to attract and retain workers with new benefits. On Monday, Target announced a newly expanded parental leave and childcare policy. Walmart is touting tuition benefits and even free SAT prep classes to snag high schoolers.

But many retail and service businesses aren’t offering something that many workers say they want: a consistent and dependable schedule.

A survey of thousands of hourly workers by the HR app Branch showed schedule stability was the second most important job factor after higher wages and above other benefits like health care.

That variability makes budgeting tough and affects people’s health and relationships according to Susan Lambert at the University of Chicago.

“For parents it can make it very difficult to establish family routines that are important for child development,” said Lambert.

Inconsistent shifts have Jamese Davis worn out at her job at a cosmetic store in Columbus, Georgia. She recently worked a night shift until midnight and then had to turn around and come back to work at 7 a.m. the next morning, a phenomenon that has been dubbed “clopening.”

As an 8-year veteran of the retail business, Davis has become reluctantly accustomed to crazy hours: Sometimes late nights, sometimes early mornings, often scheduled with less than a week’s notice.

“I actually have mental health issues. I haven’t been eating properly. It affects me greatly,” she said.

Lambert said one of the reasons the restaurant and retail industries have been slow to change scheduling practices is the need to respond to shifting customer demand.

One exception is Walmart, which rolled out a predictive scheduling program last year. Using an app, workers can schedule about 90% of available hours up to 13 weeks in advance.

Spokeswoman Michelle Malashock said analyzing the immense traffic in their stores allows them to better predict their staffing needs.

“We can only do that because of the size and the amount of data that we have,” she said.

Many local governments are starting to step in where industry hasn’t. The state of Oregon and the cities of New York, San Francisco, Seattle and Philadelphia have all passed laws forcing businesses to offer guaranteed hours and advance notice of schedules ranging from 72 hours to two full weeks, with several more cities looking to follow suit.

MIT management professor Zeynep Ton said even if such laws remain geographically limited, they could have a big effect since many retail and service businesses are national.

“It’s making retailers think twice about how they offer schedules,” she said.