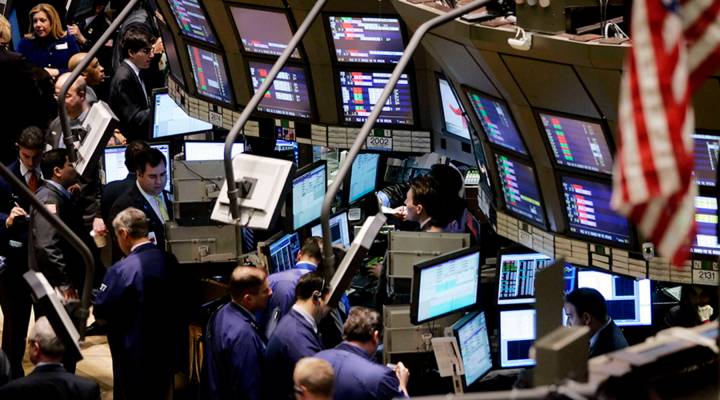 COPY
Traders work on the floor of the New York Stock Exchange January 22, 2008 in New York City. The Federal Reserve, in reaction to a severe downturn in worldwide stock markets and concern about a United States recession, reduced its interest rate by three-quarters of a percentage point before the opening NYSC bell.  Stephen Chernin/Getty Images
Divided Decade

Traders work on the floor of the New York Stock Exchange January 22, 2008 in New York City. The Federal Reserve, in reaction to a severe downturn in worldwide stock markets and concern about a United States recession, reduced its interest rate by three-quarters of a percentage point before the opening NYSC bell.  Stephen Chernin/Getty Images
Listen Now

Let me take you back to January 2008. Then presidential candidate Barack Obama had just bested then presidential candidate Hillary Clinton in the Iowa caucuses, the New York Giants and New England Patriots were headed to the Super Bowl, and the Federal Reserve announced an emergency cut to interest rates. That last item may have gone unnoticed by many, but was part of something that would eventually consume the economy, the news cycle, and our politics for years to come.

By that time, stock markets in the U.S. and around the world were sinking, the number of people defaulting on their mortgages was rising, and some short term lending markets — the kinds that big businesses use to borrow money — were starting to show signs of trouble. The Fed usually cuts rates to spur investment, to boost growth, and also to communicate its stance on economic conditions. The 0.75 percent cut showed the Fed was paying attention to what later that year would morph into the financial crisis, but did it do enough?

Marketplace Morning Report host David Brancaccio spoke to Andrew Metrick, a professor of finance and management at the Yale School of Management and director of the Yale Program on Financial Stability, about the early inklings of crisis and the limits of monetary policy.

Brancaccio: So let’s start with, it was Jan. 22, 2008. How weird was it for the Fed to in between meetings, when we’re expecting them to nuance interest rate policy, to suddenly come out with an announcement like this?

Metrick: It’s certainly surprising when the Fed does something in between meetings. Ever since August of 2007, the Federal Reserve had been very, very carefully following markets, both domestic and international, for the large disruptions that occurred as a result of the subprime crisis.

Brancaccio: You just wish the Fed was doing some of this earlier in the cycle don’t you?

Metrick: You know with the benefit of hindsight, I think the one thing that maybe everyone could agree, wish we did earlier, was put in a couple of special programs that came two months later that were both designed to try to help the Bear Stearns and Lehman Brothers of the world deal with a liquidity crisis. Probably would have been helpful to have it a little earlier, but it’s kind of an extreme thing and not the type of thing that you usually can do outside of an emergency. It in fact required that they use their emergency authority to do it.

Brancaccio: So back to Jan. 22, 2008. The Fed cuts interest rates, the biggest one-day drop in 24 years. Even though the great financial mess was to come later that year, at least the stock market didn’t crash in early 2008. So I guess there’s that?

Metrick: That’s certainly not a bad thing if the stock market doesn’t crash. But at this particular time, the Federal Reserve, if you could have eavesdropped in on the meetings, and this is a guess because certainly I have never been able to do that, you would have heard them talking much more about disruption in credit markets rather than in equity markets. That was the concern at that time.

Brancaccio: And so along with everything else, cutting rates on that particular day sent a message to people particularly worried about those credit markets, that our stance is going to be to ease because we realize there’s a problem out there?

Metrick: Yes, I think that was the single most important thing that action did, and that most of the actions did over the time between August 2007 and September 2008. But the Fed’s tools for this type of crisis, I think as we learned, were limited. They did what they could but had limited discretion over the types of problems that eventually bubbled through the market and became apparent in September of that year.