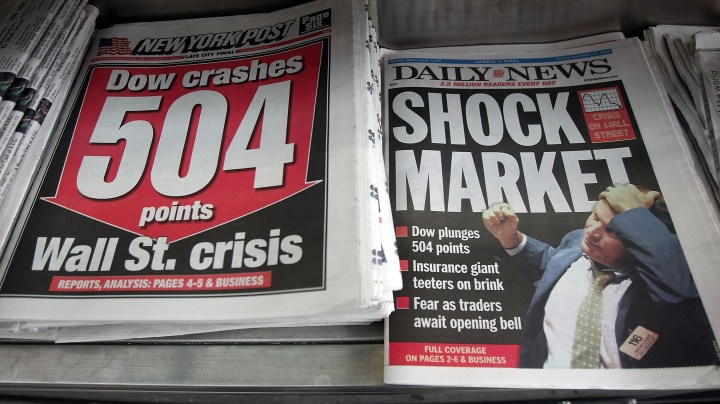 COPY
Newspapers at a newsstand on Sept. 16, 2008, in New York City, at the height of the Great Recession. Mario Tama/Getty Images

Newspapers at a newsstand on Sept. 16, 2008, in New York City, at the height of the Great Recession. Mario Tama/Getty Images
Listen Now

The Federal Reserve announced it’s cutting interest rates by a quarter point, which was pretty much expected. (The Fed cuts interest rates to stimulate the economy, it raises them to put the brakes on an economy that’s growing too fast and risks high inflation.)

The last time the Fed started to cut rates, back in August of 2007, there were some flashing warning signs on the economy’s dashboard. The check engine light was on.

“The housing market had started to implode, there had been a shock going through financial markets,” said Seth Carpenter, chief economist at UBS. The Fed spent the next year and change hammering down interest rates as the economic situation went from bad to worse. The engine was on fire. The last time the Fed cut rates was December 2008.

“Last time it was patently obvious what they should do,” said Mark Zandi, chief economist at Moody’s Analytics. “They had to cut rates, it was a mess. Unemployment was skyrocketing, the banking system was on death’s door. There was no ambiguity about it. This go-around, there’s debate.”

There’s a debate because in a lot of ways the economy today is pretty good. The unemployment rate is close to a 50-year low, stocks are near a record high, gross domestic product growth rose to 2.7% last quarter. Two Federal Open Market Committee members voted against the rate cut today.

“I at least think on the merits they should not cut,” said Douglas Holtz-Eakin, president of the American Action Forum, a center-right think tank. So why is the Fed trying to stimulate the economy?

“The old wisdom is that recoveries don’t die of old age, they die of policy mistakes. They don’t want to be the ones who make that mistake,” said Holtz-Eakin.

In other words: better safe than sorry. Business spending in the U.S. is down, business confidence is down, inflation is a bit below the 2% level where the Fed would like it. On top of that there are a lot of things that could go very wrong.

“You’ve got the [International Monetary Fund] downgrading how fast the world is growing, but also things like the potential trade war to escalate, the potential hard Brexit in the U.K., if China had a popping bubble, stuff like that,” explained Austan Goolsbee, professor of economics at the University of Chicago’s Booth School of Business.

Normally, the Federal Reserve might be wary of raising rates for fear of pushing inflation. But inflation has been so stubbornly below target that this doesn’t appear to be much of a risk here.

There’s something else. There’s kind of a dark cloud looming over the Fed right now. It’s the fact that if we did get a full-blown recession in the near future, the Fed wouldn’t have the same firepower to fight it as it used to.

“The Fed is in a dilemma when it comes to how much room they have,” said Goolsbee.

“How constraining that can be on monetary policy, I think that absolutely is now deep in their psyche, and they’re moving to be preemptive,” said UBS’s Carpenter.

If we get another recession, it could well be harder to get us out of it. The Fed is saying best to do everything you can to avoid one altogether and keep the expansion going. And if the Fed gets it right and the expansion does continue, interest rates can rise and the Fed will have its old firepower back.

Correction (Aug. 1, 2019): An earlier headline on this story incorrectly stated the Fed’s action.