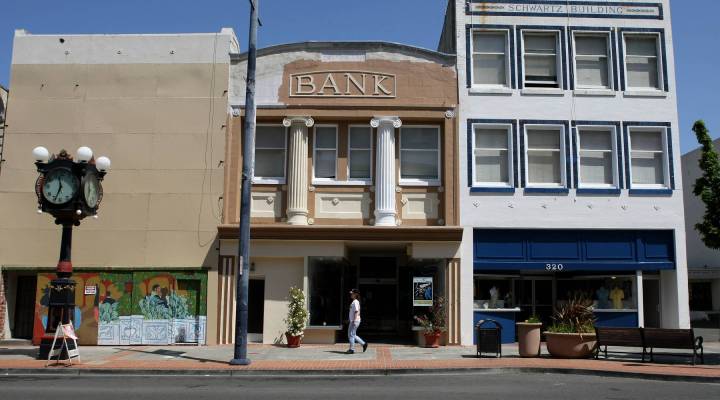 You’ve probably heard the term food desert to describe a neighborhood where residents have little or no access to fresh and healthy food. Food deserts hit low-income communities hard, leaving their residents with few options and sometimes long distances to travel in search of healthy food.

The U.S. Department of Agriculture’s most recent study says 39 million Americans live in “low-access communities,” or communities in which at least a third of the population is more than a mile away from a supermarket or large grocery store in an urban area, or more than 10 miles away in a rural area.

Lauren Ornelas is the founder and director of the Food Empowerment Project based in Northern California. Her organization studies food deserts in Santa Clara County and the city of Vallejo, both in California, and is working to improve communities’ access to healthy food. Ornelas spoke with host Lizzie O’Leary. The following is an edited transcript of their conversation.

Lizzie O’Leary: You did a big study in Santa Clara County. What did you look for and what you find?

Lauren Ornelas: One of the things that we found out was that, I guess no surprise to many people, is that high-income communities had way more access to fresh produce than communities of color and low-income communities had. In fact, the high-income areas had 14 times more access to even frozen vegetables. So in communities of color and low-income communities, what you would typically find in the freezer section would be frozen pizzas or ice cream, not necessarily frozen vegetables. We also found that in a lot of these communities, you had produce that may be available at the convenience store at the register, but they didn’t have prices on them. So that meant that whoever was behind the counter would determine how much, say, a banana would cost, and it might change depending on who you were. This type of system also puts people who don’t speak English at an incredible disadvantage to others. We also found that some of the smaller, what I would consider convenience stores or liquor stores, were actually being labeled as proper grocery stores and supermarkets even though they clearly weren’t that at all.

O’Leary: What are some things do you think people listening to this interview might not realize? I know you mentioned to my producer the idea of being time poor, which I think might be something that people in higher-income communities are not thinking about.

Ornelas: I think that a lot of times when people hear about issues like high rates of diabetes or other problems, they immediately think that “these people” don’t want to eat healthy, without acknowledging that many of these people desperately want to eat more fresh produce. It’s simply not available to them. Especially immigrants to this country actually eat healthier in the communities that they came from because they were able to grow their own food. So sometimes it’s like, “Oh, well you could buy, you know, you can go in bulk and buy things really cheap. But one, not a lot of these locations these grocery stores have bulk sections. And two, a lot of people are exactly time poor and cash poor, meaning that they’re working several jobs to make ends meet, and they don’t have a lot of time to sit and cook a meal from scratch. So it is those that are more convenient foods are going to be easier for them when they’re trying to make ends meet. They’re trying to keep a roof over their head while they work two to three jobs that aren’t paying them very much.

O’Leary: Tell me about the recommendations you made, because I know you guys have talked with policymakers and business leaders. What do you say to them in terms of how they can make some changes?

Ornelas: One thing is to make sure that bus lines — for a lot of these people don’t have cars and so they’re reliant upon buses in order to get from home to the grocery store from work — so to try and figure out ways to make the bus lines and locations where they actually are going from where communities of color and low-income community people are living to the grocery stores without them having to take multiple buses. They can also ensure that there’s no restrictions or limitations on how many grocery bags that people can bring on the buses. We also really strongly feel that more needs to be done to help people grow their own food. This is something that overwhelmingly we found in focus groups is that people wanted to grow their own food. Not everybody has access to land, but if communities and city officials were able to provide land available for people to grow their own food, that’s a win-win for everybody. Also we feel that worker cooperatives are a big part of a solution for the issue, where the people who are working there are from the community, and the profits from those cooperatives stay in the community.