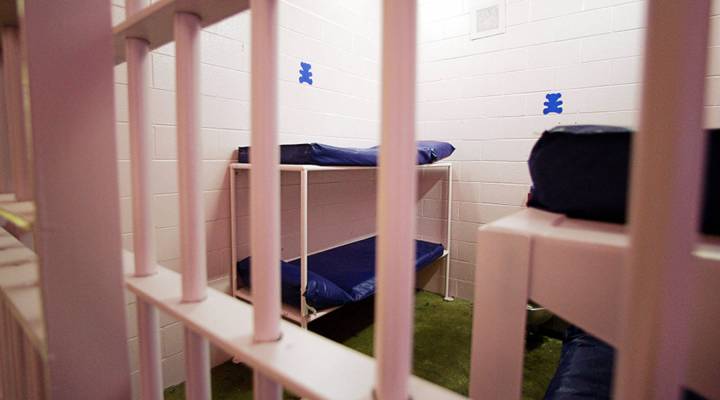 COPY
View of the holding cell 14 November 2006 of the newly painted Dallas County jail in Buffalo, Missouri, with the color scheme of pink with blue teddy bear accents. The Dallas County Detention Center is being repainted a soft shade of pink in an effort to better manage sometimes volatile detainees. JEFF HAYNES/AFP/Getty Images
Shelf Life

View of the holding cell 14 November 2006 of the newly painted Dallas County jail in Buffalo, Missouri, with the color scheme of pink with blue teddy bear accents. The Dallas County Detention Center is being repainted a soft shade of pink in an effort to better manage sometimes volatile detainees. JEFF HAYNES/AFP/Getty Images
Listen Now

In her new book, “The Secret Lives of Color,” Kassia St. Clair chronicles the origin stories of a rainbow of colors, dyes and shades. In this occasional series, we’ll highlight some of the hues featured in her book and the unusual stories behind them. Today, she tells the story of a Baker Miller pink, a shade that at one time, seemed a solution to rising crime rates.

In the 1970s people were getting very worried about rising crime rates. People were even referring to crime waves. But in 1979, a psychologist, Alexander G. Schauss announced he had found the secret to making people less aggressive. The secret, according to Schauss, was a very particular shade of pink, a shade we now know as Baker-Miller Pink. It’s a really an unattractive color — some might call it a sickly shade of mid-pink.

Baker-Miller Pink became a kind of pop culture phenomenon. Schauss, who worked on the initial tests, would do TV interviews about the pink shade’s power to sap strength and to minimize aggression in the people exposed to it.

It was used by bus companies in their waiting rooms, in the drunk tanks of small town prisons, and finally it was used in the visitor’s locker room of a football stadium. But the popularity of the color eventually went into decline after an academic backlash challenged the initial research.

But the color was not totally forgotten. Its latest outing has been in the home of Kendall Jenner. She said she read it could suppress appetite, though it is not clear if there’s academic research to back that up.