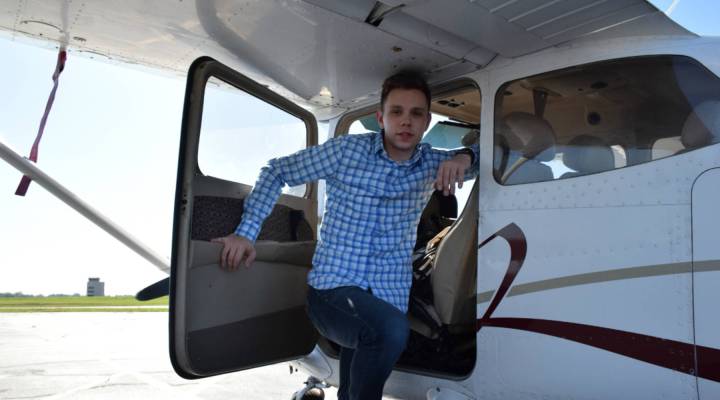 COPY
Zack Tusing, 19, is working on his pilot's license. He's hoping to get hired by an airline by the time he's 21. Marielle Segarra/Marketplace

Zack Tusing, 19, is working on his pilot's license. He's hoping to get hired by an airline by the time he's 21. Marielle Segarra/Marketplace
Listen Now

Zack Tusing is training to be a pilot. One of his favorite places to fly is a spot along the Hudson River, overlooking New York City. Sure, he says, it’s a little scary hovering next to skyscrapers and being suspended over water in a one engine Cessna.

“Other than that, it’s really cool,” Tusing said. “Central Park is cool to see. Being right at the top of One World Trade Center is cool. You can see Yankee Stadium.”

Tusing is 19, and he has been training to be a pilot since he was a toddler.

“When I was three or four, my dad would hook up, I think it was a Microsoft Flight Simulator 1995, on the computer, and I would just try to get the plane on the ground somewhere without crashing,” he said.

When he took his first actual flying lesson at 13, the outlook for pilots wasn’t great. It was 2011, and there had been a decade of turmoil in the airline industry — with downturns after 9/11 and during the recession. About 10,000 pilots were furloughed.

Entry-level pilot salaries were about $22,000 a year on average, according to the aviation advisory firm FAPA. Meanwhile, training could cost five times that, says Wendy Beckman, who runs the aerospace department at Middle Tennessee State University.

“You heard stories of people on food stamps and living at home and sleeping in crew lounges,” Beckman said.

Infinity Flight Group, a flight training school, opened a few years ago with a three-plane fleet. Now it has 25 planes and it’s having trouble keeping up with demand.

Tusing didn’t want to give up his dream. In fall 2016, he enrolled in Penn State Abington’s business program, with plans to get his pilot’s license after graduation.

But there was a shift happening in the airline industry.

There’s a mandatory retirement age for pilots: 65. That time has come for a lot of them, says Gregory John, who runs Infinity Flight Group, the pilot training school Tusing attends.

“It’s estimated [that in] the next 10 years, half of all pilots will be retiring from major airlines,” John said.

The big airlines, like American and United, have hired more than 4,000 pilots this year — an eightfold increase from just five years ago, according to FAPA.

“They’ll help pay for some of your flight training,” John said. “They’ll guarantee you a job.”

Some are also relaxing their preference for a college degree. So in January, Zack Tusing dropped out of college to train as a pilot full time. Tusing has flown about 200 hours so far; he needs 1,500 to get hired at a commercial airline. He says it’ll probably cost him $80,000 all told. But he sees a real future as a pilot. 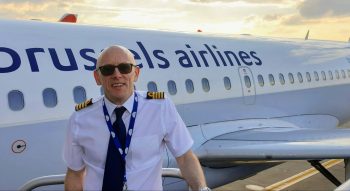