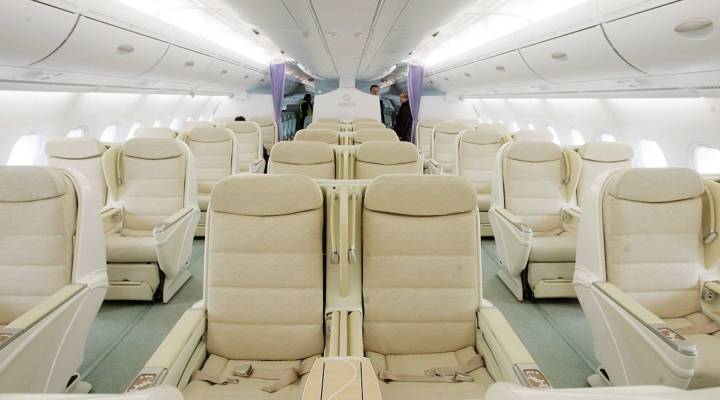 How many pilots do you need up there in the friendly skies? Boeing recently projected that the airline industry will need almost 800,000 pilots over the next 20 years — about double the current workforce.

The problem is, though, that airlines are already facing something of a pilot shortage. One solution is to train more pilots, another is to decrease the need for pilots. Typically three or four pilots are needed for a long haul flight, but Airbus and Thales, a company that makes cockpit technology, think automation could reduce that number within the next five years.

Seth Kaplan, managing partner at Airline Weekly, joined us to discuss the current state of the airline labor force. Below is an edited transcript of the interview.

We hear a lot about a pilot shortage. What’s going on here?

Well, first you had this wave of retirements — a whole lot of pilots who came into the workforce after the Vietnam War were kind of all forced to retire at once, because you’re not allowed to be a commercial pilot once you turn 65. On top of that, airlines around the world were growing and there was more demand for pilots. Then in America, the rules changed. It became a lot harder to become a pilot. You need a whole lot more hours of practice time, basically, so that’s more expensive. That means not as many people can become pilots. And when they become a pilot, they expect to earn a lot more than those minimum wages that we used to hear pilots earned from some of the smaller airlines. That’s not what they’re earning anymore. So all of that  gets what airlines say is a big shortage. The pilot unions, by the way, say there’s no shortage. They say, “Hey, just pay more and you’ll have all the pilots you need.”

So turning now to automation — how would this work? Are we talking about planes without pilots?

Well, maybe someday in the future. I mean, decades off. For now, what manufacturers are talking about is maybe having one fewer pilot on a flight. Nowadays, you need two pilots in the cockpit, but that means you might need to have three or four on board for when somebody takes a break. What they’re talking about is getting it to where at cruise altitude on a long flight,  you might only need one pilot in the cockpit and then you might only need to carry, say, two on board on an eight to 12 hour flight, rather than three pilots. And there’s disagreement about the answer to that question.

Are there other safety concerns here?

Well, pilot unions have said absolutely that’s a safety concern. Now look, of course they’re also concerned about employment for pilots. But they say you want two pilots up there because what happens if something happens to only one pilot? On the other hand, cockpits used to have three pilots in them at all times, and now almost all of them only need two pilots in the cockpit. And of course flying is generally as safe as it’s ever been. So one way to look at it is that as flight has become more automated and as not as many pilots are required, flying has become safer. So the reductions so far in pilots hasn’t made things less safe. But pilot unions would say, “Hey, there’s a big difference between dropping from three to two, and dropping from two to one.”