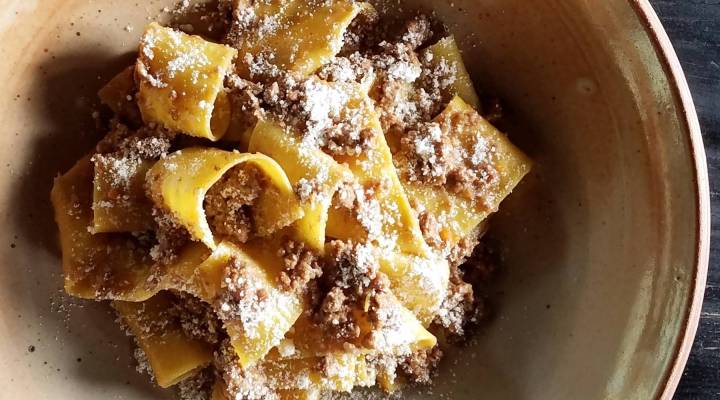 Gusto 54 is a Toronto-based company with several restaurants in Toronto and one called Felix in Los Angeles. Felix opened in Venice in 2017, and if you’re lucky enough to get a reservation, you’ll see executive chef Evan Funke rolling, dusting and flipping pasta dough in the restaurant’s pasta room. Gusto 54’s first restaurant, Trattoria Nervosa, was opened by owner and CEO Janet Zuccarini in 1996 in Toronto, but the company’s roots are in the enterprises of her father, an Italian man who brought the first espresso machine to Canada in 1954. Zuccarini and Funke joined Marketplace Weekend to take the Marketplace Quiz and shared a recipe for Zuccarini’s favorite holiday dish.

Fill in the blank. Money can’t buy you happiness but it can buy you _____

Evan Funke: More money. We need money to make money, so if you have money you can make more money.

Zuccarini: I would start a school for children. A new way of learning: teaching children about finances, how to make money, how to invest, how to save.

Funke: Real life skills. I dig that. I wish I’d had that. I’d either be a firefighter or a jeweler. I love diamonds. Something about their creations through unimaginable pressure. It’s kind of fascinating.

What’s something that you bought that you now completely regret buying?

Zuccarini: I don’t buy a lot of things, so I don’t own a lot of things. And when people come into my house, that’s the first thing they say is like, you don’t have stuff. I spend my money mainly on experiences. Traveling, things like that. Food, I spend a lot of money on buying the best food that I can buy. When I buy something, I think about it a lot. And so, I don’t have any regrets that I can think of right now.

When did you realize that cooking could be an actual career for you?

Funke: I think the the second I set foot in culinary school. I knew in my mind, body and soul that I was gonna be a restaurateur. I had no idea how I was going to get there, but I knew there was something burning inside of me that I would do whatever it took to be the best.

Zuccarini: I lived in Rome for eight years, and that’s where I fell in love with cooking for myself, because I didn’t have any money to eat out, except I’d go to a lot of pizzerias. And my friends would tell me a lot that I should open up a restaurant. So that kind of put something in my mind, but I never thought I would ever do that. And my first restaurant fell into my lap. So I was asked to become a partner in this restaurant. And, you know, two weeks later I owned a restaurant and I didn’t realize I had married two passions, business and cooking and food.

Zuccarini: My dog. Is that a possession? My dog, Roma.

Funke: My most prized possession … I think it’s my cumulative skill. I am a culmination of mentorshi. I think that’s what I prize most in life.

Funke: Oh man, so embarrassing. I was a towel boy at a gym. So gross.

Zuccarini: My father was Italian and Italians put their kids to work, so I started working for him as a 12-year-old, and he brought the first espresso machine into Canada. So he introduced coffee culture. So I was working trade shows, introducing people to this new beverage that no one had ever heard of. Times have certainly changed, but that was my first job.

What is something that everyone should own no matter how much it costs?

Zuccarini: OK, I’m just going to go for an Evan answer, which is super ethereal and poetic, but everyone should own their own destiny.

What’s your favorite thing to eat or cook during the holidays?

Funke: Well, so the Funkes, we created a tradition about 10 years ago to make pizza on Christmas because it’s Christmas colors: red, white and green. And ever since I went to culinary school and was at the back end of ’99, it’s been like indentured servitude that I have to cook, so I’ve cooked literally every single holiday festive gathering since then, which is almost coming up on 20 years. So, we make pizza. It’s easy on me and it’s festive.

Zuccarini: In my household, my father was mainly kind of the cook, the chef, and taught my mother how to cook. My mother is German. My father was Italian, and it was always based around pasta, and sometimes you would get fancy and do, like, a linguini with a spicy tomato sauce and a whole lobster on top. And that would basically be it, but we always, always, always had lasagna made from scratch. And for my mom, that would be an all-day affair, and we would have just one dish. It’d be a one-dish wonder, it’d be lasagna and maybe some rapini on the side. Usually, a classic lasagna with spinach noodle and a Bolognese sauce and besciamella, and that would be it.

Funke: I want to make that the new tradition.

Zuccarini: You have to! Skip out on pizza and go for a lasagna.

Bring a large pot of water to a boil. Add spinach; cook until tender, 4-5 minutes. Drain. Squeeze liquid from spinach; chop very finely. Wrap spinach in a towel; squeeze to dry completely (you should have 3⁄4 cup).

Combine spinach, eggs, and 1 tablespoon water in a bowl; mix with a fork. Mound 2 1⁄2 cups flour on a work surface; create a wide well in center with your hands. Sprinkle 1 teaspoon salt over flour. Pour spinach mixture into well and, using a fork, begin to slowly incorporate flour from well into spinach mixture using a circular motion to make a stiff dough.

Knead dough, adding a little flour as necessary to prevent sticking, until it is smooth and elastic, about 10 minutes. Wrap dough in plastic wrap; let rest for 30 minutes.

Divide dough into 6 pieces; cover all but 1 piece with a towel. Using your hands, flatten the piece of dough into a rectangle. Pass dough through widest setting of a hand-cranked pasta roller. Fold dough into thirds to create another rectangle; pass dough through widest setting again, feeding open edge through first; fold into thirds again and roll twice through same setting. Decrease setting one notch; roll pasta through to make a thinner pasta sheet. Lower setting again; feed pasta sheet through roller. Repeat through each setting until very thin, about 1⁄16″, stopping at the second-to-last setting. Halve pasta sheet crosswise and transfer to a parchment paper-lined sheet tray; dust lightly with flour. Repeat above steps with remaining dough pieces, layering sheets between pieces of floured parchment paper.

Bring a large pot of salted water to a boil. Add roughly a quarter of the pasta sheets, stir gently and cook until just al dente, 2-3 minutes. Using a slotted spoon, remove pasta sheets and lay flat on a damp towel without overlapping; cover with another damp towel. Repeat with remaining pasta.

Heat 3 tablespoons butter in a saucepan over medium-low heat. Whisk in remaining flour and cook, whisking constantly, until it begins to bubble, about 3 minutes. While whisking, add milk in a steady stream. Bring to a simmer and cook, whisking occasionally, until sauce thickens, 10-15 minutes. Season generously with salt and pepper and set besciamella aside.

Heat oven to 450. Spread 1 cup ragu over bottom of a 2-quart baking dish, then cover evenly with 2 sheets of pasta, cutting to fit. Top with 3⁄4 cup ragu, spread with 1⁄4 cup besciamella, then sprinkle with 1⁄4 cup cheese. Starting with another layer of pasta, repeat layering process 3 more times. Top with another pasta layer (don’t trim edges), remaining besciamella and cheese; dot with remaining butter. (Reserve any remaining pasta for another use.) Bake for 15 minutes; reduce heat to 350. Continue baking until bubbly, 15-20 minutes more. Let cool slightly before serving.

Put the tomatoes and their juice into a blender; puree until smooth and set aside.

Add the beef and pork and cook, stirring and breaking up meat with a wooden spoon, until the meat begins to brown, about 10 minutes. Add the pancetta and continue cooking, stirring occasionally, until its fat has rendered, about 10 minutes more. Increase the heat to medium, add the wine and simmer, stirring constantly, until evaporated, about 5 minutes. Add tomato paste and cook, stirring frequently, for 2 minutes. Add reserved tomato puree, reduce heat to low and simmer, stirring occasionally, until sauce is very thick, about 3 hours.
Season ragu with salt and pepper. Toss with fresh tagliatelle, or the pasta of your choice, or use in lasagna. Serve with grated Parmigiano-Reggiano.