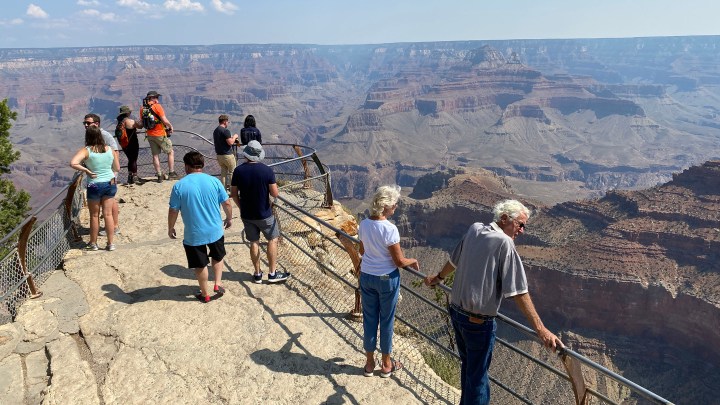 COPY
Leading up to the Fourth of July, one restaurant near Grand Canyon National Park is serving more patrons than before the pandemic. Daniel Slim/AFP via Getty Images

Leading up to the Fourth of July, one restaurant near Grand Canyon National Park is serving more patrons than before the pandemic. Daniel Slim/AFP via Getty Images
Listen Now

National Parks are bracing for a surge in tourism this weekend. Some are even restricting park access to reduce congestion. Hotels in towns near parks are filling up and restaurants are expecting big crowds.

The line to get to the South Rim of Grand Canyon National Park stretches through Tusayan, Arizona.

“We’re expecting a big influx this weekend. That’s part of why my phone’s ringing off the hook,” said Charlie Hendrix, the town’s manager.

And if park visitors want Fourth of July festivities like a parade and a drone light show, Tusayan will be one of the closest options. Nearby at Big E Steakhouse & Saloon, you can get a Big E Arizona New York strip steak and a plate of canyon pasta for the kids. The restaurant is already dealing with high demand going into the weekend, according to general manager Clayann Cook.

“My business has been off the rails,” Cook said. “We’re serving anywhere between 600 and 700 people a day from 3 o’clock to 9 o’clock,” surpassing even pre-pandemic numbers. “But I’m running at 50% of that staff. I could use a little more so I’m not killing them.”

She needs to hire for every position, from waitstaff to kitchen workers, but applications are not exactly pouring in. For this weekend, steakhouse customers should just expect a bit of a wait.